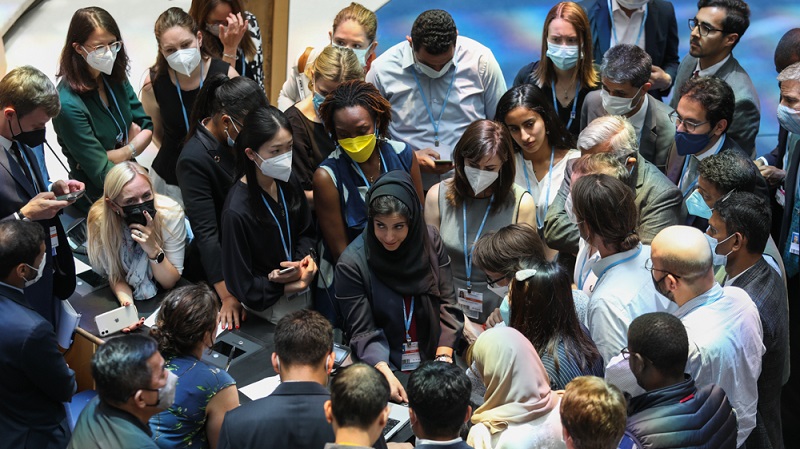 Delegates huddle during the contact group on the Global Stocktake in Bonn. (Photo: IISD)

The sense of urgency that emanated from Cop26 continued to fizzle out this week, as the climate diplomacy hardcore gathered in Germany for the Bonn climate talks.

In the baking glass conference centre on the banks of the Rhine, talks moved slowly. The UN-authorised protests reminded negotiators that this isn’t just some trade show – this stuff actually matters.

Climate-vulnerable developing countries tried to inject some urgency. Instead of a three-year “talking shop” on how to arrange funding for climate disaster victims, they demanded a funding facility be set up by Cop27 in Egypt this November and the issue be on the agenda.

But that was too much for the EU and others, who blocked those proposals. Publicly, they say they want to improve existing aid systems rather than setting up a whole new finance architecture. Privately, they’re not sure how much cash they can get out of their finance ministers back home.

Rich countries like to say that the quicker emissions are reduced, the less loss and damage climate change will cause. On this territory, they were much more comfortable in Bonn trying to pressure China into more emission reductions by trying to include references to “major emitters” in informal notes. That didn’t fly with Beijing.

Bonn saw good-byes too. UN climate change head honcho, Patricia Espinosa, is stepping down next month after six years in the job. In an exit interview with Climate Home, she said she’d generally aimed for a good cop, bad cop routine with UN secretary-general António Guterres. While he described countries increasing their fossil fuel production “truly dangerous radicals,” she diplomatically held the consensus-based system, on which the climate talks are based, together.

Ayman Shasly, the veteran chair of the Arab Group, made a much quieter exit by not turning up. He was replaced by Albara Tawfiq, whom, climate observers hope, could soften Saudi’s style of negotiations, if not the substance.