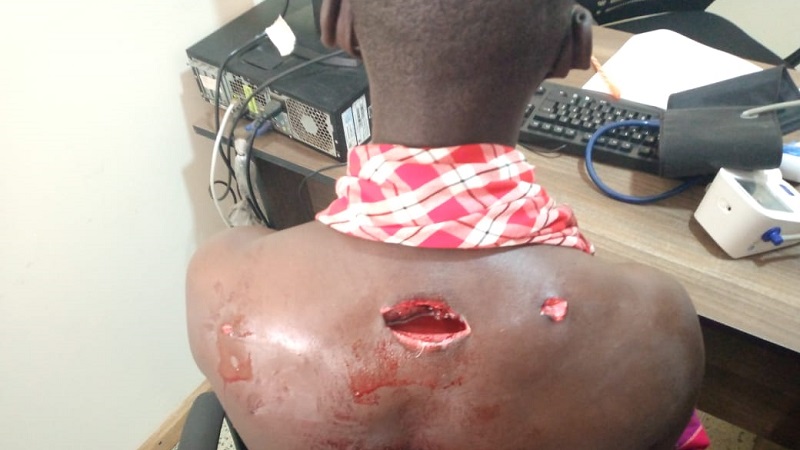 A Maasai man with a gun shot wound on his back after police allegedly opened fire on people in Loliondo, northern Tanzania (Photo: Joseph Oleshangay)

Tanzanian authorities have been filmed opening fire on Maasai people in the northern Ngorongoro district, an area popular with tourists, following a dispute over turning land used for grazing into a game reserve.

Footage shared on social media shows people running from gun shots in the Loliondo area. Further images shared with Climate Home News showed people with small bullet wounds on their leg, feet, top of their back and even on someone’s head.

“It started with tear gas and it turned to live bullets,” Joseph Oleshangay, a Maasai lawyer, activist and resident of Ngorongoro, who witnessed the scene, told Climate Home.

“At least 10 people have been wounded. Eight of them are women and two are men, including one who is 70 years old. These are not people who were there to fight,” he said. Climate Home could not independently verify these numbers.

Tanzanian police and game wardens arrived in the area on Tuesday to demarcate a 1,500 square kilometres of “village land” as a game reserve for trophy hunting, he said.

The move would ban all human settlements and grazing in the area, effectively evicting semi-pastoralist Maasai communities.

Shocking violence happening now in Loliondo, Tanzania – military firing on Maasai, who are being evicted from the area for conservation zones & trophy hunters.
👉 If you’re thinking of going on safari to Kenya/ Tanzania – this is the reality behind the tourist photos.
🔊 Sound on pic.twitter.com/WD0yvGBsf2

Loliondo is an important area for grazing in the dry season because it contains the only permanent water point in the area.

Climate change is forecast to lead to more erratic rainfall and longer drought periods in northern Tanzania, making access to a water source crucial to the survival of the Maasai pastoralist tradition.

“By attacking pastoralism, you are attacking the Maasai cultural and spirituality,” said Oleshangay.

In recent days, Maasai people gathered to protest the plans and defend their land.

The highest level of torture and intimidation in grabbing the community land in loliondo. The community of loliondo protested against placing of beacons 1500Km which is the community land. @Oleshangay @AnethStanley @SusannaN2 @SuluhuSamia @ThabitSenior pic.twitter.com/SBoY5wVWLm

But on Saturday, Arusha regional commissioner John Mongella said that a police officer had died in the confrontation with a Maasai community after being shot by an arrow. He claimed that there had been no other casualties from the incident and that footage shared on social media showing authorities opening fire on Maasai people was several years old.

Opposition leader Tundu Antiphas Lissu, of the Chadema party, accused the Tanzanian government of “waging a violent war” against the Maasai people.

“The international community has a responsibility to intervene & end these human rights abuses & hold the govt accountable!” he tweeted.

“Despite earlier pauses, the Tanzanian government is blindly moving ahead with plans to remove Maasai pastoralists out of their land to clear the way for trophy hunting,” said Anuradha Mittal, of the environmental think tank Oakland Institute. “International mobilisation on these developments is imperative to help stop this disastrous and illegal move.”

Mittal argued that the forced evictions in the area would violate a 2018 East African Court of Justice injunction, which prohibited the Tanzanian government from evicting Maasai people or engaging in harassment against those living on the contested land.

Yet, the Tanzania government is seeking to relocate more than 73,000 pastoralists out of an estimated 93,000 living in the Ngorongoro conservation area.

This goes against a rapidly growing body of evidence which shows that indigenous people have a vital role to play in protecting biodiversity.

Human rights organisations such as Survival International have warned against the rise of “fortress” conservation, which closes off land and forests to human activities, at the expense of communities with roots there.

Fiore Longo, campaigner with the NGO, told Climate Home: “I think that what is happening to the Maasai today should be put in the wider context of human rights abuses in the name of conservation. This violence that we see in Tanzania is the reality of conservation in Africa and Asia: daily violations of the human rights of indigenous peoples and local communities so that the rich can hunt and do safari in peace.

“These abuses are systemic and are explained by a dominant model based on racism and colonialism. We can no longer turn a blind eye to human rights abuses committed in the name of ‘conservation’. This model of conservation is deeply inhumane and ineffective and must be changed now.”