Patricia Espinosa: Some rich nations felt demands on finance were ‘too strong’ 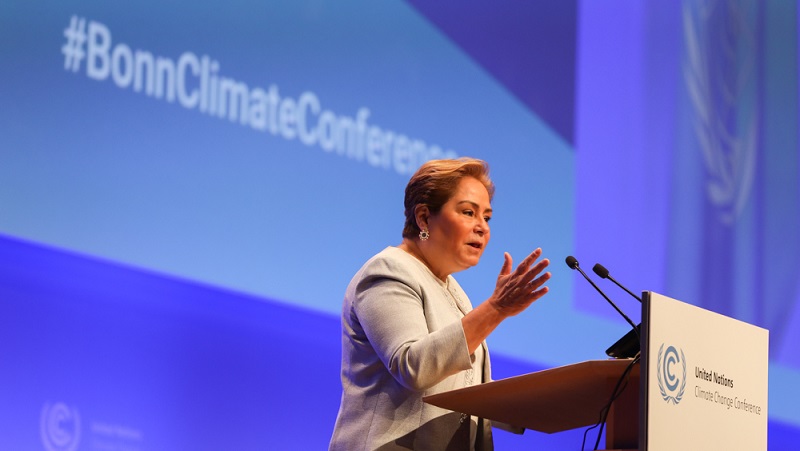 Patricia Espinosa at the opening plenary of the Bonn climate conference (Photo: IISD/ENB | Kiara Worth)

The 63-year-old Mexican diplomat is leaving the UN body next month after six tumultuous years at its helm.

In an interview with Climate Home in the final hours of the Bonn climate conference, she warned that if rich nations fail to put more money on the table, the world will fall short on its climate goal.

“What we will not see is an acceleration and widening of actions at the pace that we need,” she said.

“I think that it is a fact that everybody recognises that we do not have enough climate finance,” she said. But not everyone wanted to hear they needed to dig deeper into their pockets.

Her insistence that climate finance had to reach those most in need became the hallmark of her leadership, she said.

Climate finance is “a central element of this process, holding it together”. The Paris regime is built on the recognition that “some have more responsibility and others are suffering more consequences,” she explained. “The balance comes when you get the finance.”

Despite her efforts, money is lacking. Rich countries’ promise to collectively mobilise $100bn a year by 2020 is not expected to be met before 2023.

Azara Sanogo, Oxfam’s climate lead for central and west Africa, told a press conference in Bonn that the continent’s adaptation finance gap stands at 83%. And when communities are not able to cope, and climate disasters inflict loss and damage, there is insufficient humanitarian aid for the victims.

International finance institutions and multilateral development banks have a critical role to play in plugging the gap. So far, their climate objectives have been “very modest and their actions have been mostly incremental,” said Espinosa.

While the share of funding labelled as climate finance is “significant,” she said, “I just wonder: where does the rest of the financing go?” 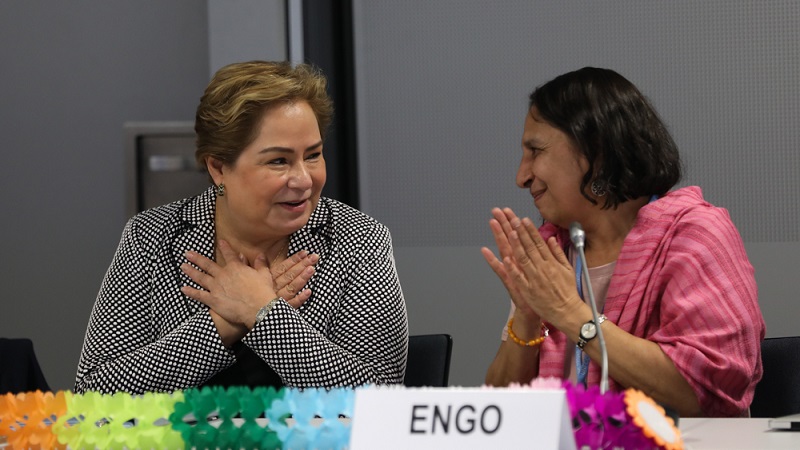 Over her six years as head of the UN climate body, the rules of the Paris Agreement were finalised and the fragile balance of the climate talks survived what she called “a wave of unprecedented challenges”: the US withdrawal from the Paris deal, social unrest in Chile which relocated the Cop to Madrid in just four weeks, the pandemic and her diagnosis of breast cancer at the start of 2019.

And yet, “the process held,” she told the opening of the Bonn meeting last week, expressing her “passion” for multilateralism and explaining her choice to continue to work during her illness. She is now in remission.

During that time, Espinosa saw herself as “the guardian” of the consensus-based system that underpins the UN climate negotiations. That requires “bringing everybody on board”. Having countries feeling that they are being put on the spot or excluded “is not acceptable in this process,” she told Climate Home.

That means that unlike UN chief António Guterres, she hasn’t been a vocal advocate for winding down fossil fuels. But “I believe that the messages by the secretary general and myself are fully aligned and complementary,” she said.

As the negotiations turn from setting targets and agreeing rules to implementation, the UN Climate Change’s focus also needs to shift.

In addition to following through countries’ climate plans, “and without intending it to become an implementing agency,” Espinosa said the UN climate body has a role to play as a “facilitator for more action on the ground” and a convenor of the entities that can accelerate delivery.

Talking to governments to understand what are the barriers to action and identify the partners that can provide solutions should be part of the job, she said.

One place to start is to deliver the elements of developing countries’ plans which are conditional on international finance and capacity building, including by making it easier to access cash.

On 15 July, Espinosa will walk out the door of the UN Climate Change offices in Bonn for the last time.

Mexico’s former ambassador to Germany, Espinosa has lived in the country since 2013 and has no immediate plans to leave.

After a holiday, she is planning to do some consultancy work and engage with universities to pass on what she has learnt about global climate governance.

But no full time job, she was quick to add, “hoping that allows me to have a bit more freedom”.

To her successor, she says: “Don’t give up… Don’t be discouraged because things are not going well, or in the right direction.” And “listen” because in the end, “this is a process led by parties”.