The Cop26 hosts are trying to build a coalition of countries to align public finance with a 1.5C global warming limit, the toughest goal of the Paris Agreement

The UK government is working to launch a coalition of countries and financial institutions committed to end public funding for fossil fuels abroad at UN climate talks in Glasgow this November.

The Cop26 host has repeatedly said it wants the summit to “consign coal to history” and has been working with Italy to seek agreement among major economies to end unabated coal power.

But the UK’s ambition goes beyond coal. It is seeking to build an alliance of nations and institutions willing to commit to end the financing of oil and gas projects internationally.

The UK is working with the European Investment Bank (EIB) to convince both developed and developing countries along with large financial institutions such as multilateral development banks to sign a statement on aligning public finance with accelerating the clean energy transition.

They are asking donors and lenders to prioritise support for clean energy, to end public finance for fossil fuels and to press others to do the same. Climate Home News understands the UK is hoping to launch the statement on the energy-themed day at Cop26 on 4 November.

In a comment article published in Project Syndicate on Friday, John Murton, the UK government’s Cop26 envoy, and Werner Hoyer, president of the EIB, wrote that at Cop26 “governments and financial institutions must commit to supporting cheaper, cleaner, no-regrets energy, and to ending all international support for fossil-fuel-based power”.

“This should not be too difficult, given that many legacy energy investments will inevitably become stranded assets,” they said, adding that “the cost of inaction would be catastrophic”.

As of March this year, the UK has ended all direct government support for the extraction, production, transportation and refining of crude oil, natural gas or thermal coal internationally. In some limited circumstances, it will still back gas-fired power plants if it aligns with a 1.5C long-term pathway.

In 2019, the EIB, the world’s largest development bank, announced it would stop funding unabated oil and gas projects by the end of 2021 in a major overhaul of its lending policy.

While there is broad agreement that funding for coal should stop, ending support for oil and particularly gas is much more politically sensitive.

In a letter sent to Cop26 boss Alok Sharma last month, seen by Climate Home News, campaigners from more than 200 organisations called for strict restrictions on all fossil fuels, including gas. They argue renewables are cost competitive and can meet the global south’s electricity and clean cooking needs. 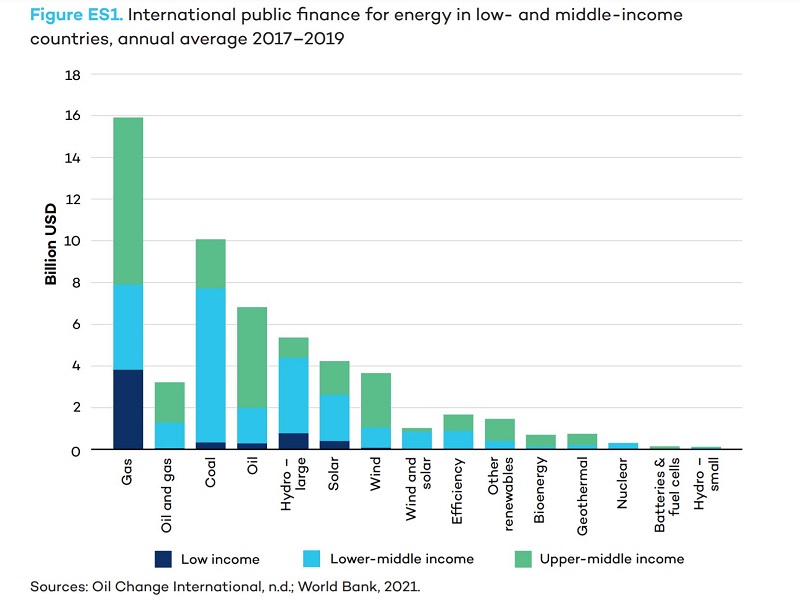 Source: Step Off the Gas report/IISD

But gas dominates international energy finance flows from multilateral development banks (MDBs) and G20 countries. From 2017-2019, low and middle-income countries received an average of nearly $16 billion in international public finance a year – four times as much as wind or solar, according to the International Institute for Sustainable Development (IISD).

The US was the third largest gas funder after China and Japan, contributing an average $2.4 billion per year in overseas gas finance.

Jake Schmidt, who heads the international climate programme at the Washington-based Natural Resources Defense Council (NRDC), told Climate Home the US should be able to sign up to the statement before Cop26 but that the wording on ending gas finance could be contentious.

Last month, the US Treasury instructed its representatives at MDBs to rule out support for gas production and coal and oil across the value chain.

The policy allows investments for gas infrastructure to continue in fragile and conflict-affected countries and in small island developing states if analysis shows there is no feasible clean energy alternative and the project would have a significant positive impact on energy access — giving more wriggle room than the UK stance.

“I don’t think the US will sign up to something that is more aggressive than its own guidance,” Schmidt said.

Joe Biden’s administration is expected to publish more guidelines on how the US “can promote ending international financing of carbon-intensive fossil fuel-based energy” ahead of Cop26. The State Department is likely to wait for the announcement to be made before pledging anything on the international stage, Schmidt added.

And Washington DC is not the only one likely to negotiate the language around gas. Germany’s state-owned development bank KfW will continue to support gas projects and some oil and diesel power plants on case-by-case basis, with support limited by quotas until 2029, under guidelines that entered into force on 1 September.

Some developing countries like Nigeria are likely to defend finance for gas. Around 43% of Nigeria’s 200 million people don’t have access to the electricity grid, making it the country with the largest energy access deficit in the world, according to the World Bank.

“While we are in the midst of encouraging rural populations to stop cooking with wood fuel and transition to gas and the government is trying to increase energy supply to the population, the international community is pulling the plug on gas investments while donor countries are still using it. That’s not my definition of climate justice,” he said.

Okereke said any initiative to cut emissions needed to take into account development needs. “Otherwise, it’s not going to fly,” he said, adding that investments in renewable energy on the continent were still falling short.