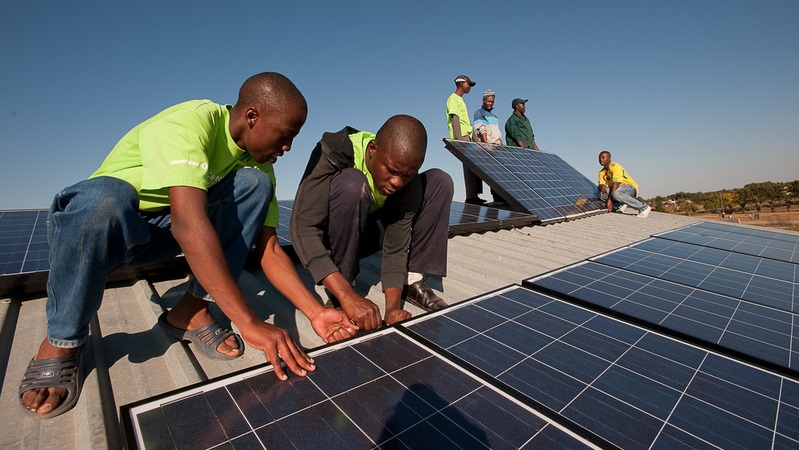 Africa’s biggest polluter has significantly strengthened its climate targets, in light of the latest science and falling renewable energy costs.

Coal-reliant South Africa has cut its emission cap for 2030 by nearly a third, from 614 million tonnes of Co2 equivalent to 420 Mt Co2e.

The target was included in the country’s climate plan, which was submitted to the UN on Monday after approval by the cabinet last week.

The document says South Africa “has warmly welcomed” the special report by the Intergovernmental Panel on Climate Change (IPCC) on how to limit warming to 1.5C.

“South Africa considers the IPCC reports to be of the highest importance in guiding our actions,” it said.

But they warned that the target was still not compatible with 1.5C of global warming.

The previous target of 398-614 MtCo2e was set in 2016. Since then, Cyril Ramaphosa has replaced Jacob Zuma as South Africa’s president, the cost of renewables has decreased rapidly and many nations have increased their climate ambition.

Earlier this year, the Ramaphosa government floated a new target of 398-440 mt Co2e and launched a consultation. On the advice of the PCC, that was further tightened to 398-420 mt Co2e.

Mandy Rambharos, PCC member and just transition manager at state-owned utility Eskom, said she was "very encouraged" by the new target, describing it as a "step in the right direction".

But, he said, the 420 mt target is only aligned with a 2C limit on global warming, rather than the 1.5C many climate vulnerable countries have called for.

Three other members of the PCC have said their colleagues' advice and the government's target do not go far enough.

In a July letter published by Climate Home News, three campaigners on the PCC called for a 354 mt Co2e target for 2030, a fossil fuel free electricity system by 2040 at the latest and no new fossil fuel projects.

“The commission’s range is still not sufficient,” Melissa Fourie, one of the authors of the letter and the executive director of South Africa’s Centre for Environmental Rights, told Climate Home in July.

The PCC was formed in January and made up of different interest groups including environmental campaigners, trade unionists and business representatives.

More than 90% of South Africa’s energy is generated from coal, mainly mined and burned in the country’s northeast by Eskom.

These high energy emissions mean that South Africa's per capita CO2 emissions are the highest in sub-Saharan Africa and greater than developed countries like France and the UK.

Eskom's ability to invest in renewable energy has been hampered by its colossal level of debt. To get around this, it is looking to partner with investors.

The coal industry employs many people so the climate plan emphasised the transition to clean energy must be fair to coal workers and their communities.