China, Russia and India are among countries resisting a timeline to phase out coal power generation, leaving it to leaders to resolve the impasse 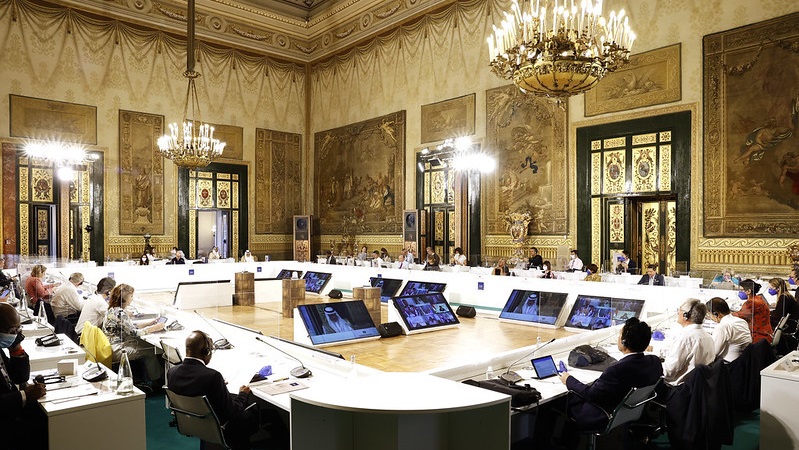 Italian ecological transition minister Roberto Cingolani apologised for the sweatiness of his blue shirt, when he walked on stage at the Royal Palace of Naples to brief press on Friday evening.

After “marathon” talks between G20 climate and energy ministers, they had reached a deal on 58 out of 60 paragraphs. A joint statement published on Sunday recognised that the impacts of global warming at 1.5C are “much lower” than at 2C and called for accelerating the transition to clean energy.

For a “large majority” of members, the Italian hosts said, that included phasing out coal.

Ahead of the meeting, the UK president of the upcoming Cop26 climate talks Alok Sharma told ministers: “We know that unabated coal power is incompatible with a future that keeps 1.5[C] alive. So let us tell the world today, we will seek to end unabated coal both at home and overseas.”

But with China, Russia, India, Turkey and Saudi Arabia among those defending the fossil fuel, there was no consensus.

UN chief Antonio Guterres has urged high income countries to quit coal in 2030 and developing nations to follow by 2040. While that transition is nearly complete in the UK, many G20 countries still have significant coal industries that will not go quietly.

Last week, Indonesia submitted a long term climate strategy to the UN that foresees continuing to burn coal past 2050, relying on carbon capture and storage to mitigate the emissions. Japan published a draft energy plan that involves generating 19% of electricity from coal in 2030.

The world urgently needs a clear & unambiguous commitment from all G20 nations to the goal of the #ParisAgreement to limit global temperature rise to 1.5° C.

I urge all G20 & other leaders to present more ambitious national #ClimateAction plans aligned with a net zero future.

Greenpeace East Asia’s Li Shuo told Climate Home News that getting China to agree to end overseas coal finance would be easier than a domestic coal phase-out but the challenges of both should not be underestimated.

The lead climate negotiator for the Alliance of Small Island States, Diann Black-Layne, praised the ministers that “refused to settle for a weak consensus”.

She said in a statement: “It is interesting to see that some G20 countries are not letting the traditional power and politics of the oil, gas, and coal industry prevail completely.”

Ministers also failed to agree a date by which they would phase out “inefficient” fossil fuel subsidies – something the group first promised in 2009 but has made little progress on. The smaller, wealthier G7 made 2025 its deadline.

G20 members collectively provided $3.3 trillions of subsidies to fossil fuels 2015-19, according to analysis by BNEF – although what counts as an “inefficient” subsidy is open to interpretation.

Resolving these issues now falls to the leaders of G20 nations at a Rome summit on 30 October.

Tom Evans, a climate diplomacy expert at E3G, said: “The G20 rightly accepted the need to accelerate climate action in the 2020s in order to keep the 1.5C temperature limit in reach. Ending coal finance and setting a date for coal phaseout are the necessary first steps for realising this vision. Breaking the G20 impasse over these issues will require a step change in climate diplomacy between now and the leaders’ summit in October.”

Ministers did agree to submit improved national climate plans ahead of the Cop26 climate talks in November. South Africa, China, India, Turkey, Saudi Arabia and South Korea have yet to update their climate targets for 2030.

The World Resources Institute’s David Waskow said in a statement: “It is encouraging that G20 climate and energy ministers agreed to turn in stronger national commitments ahead of the Cop26 climate talks this November. The big question now is whether those plans will add up to what the world needs to avert climate disaster.”

The Italian hosts tried to get the G20 to agree to allocate a certain proportion of Covid recovery funding to green sectors but leaders were not willing to commit to a number. They agreed only to “endeavour” to allocate an “ambitious share”.