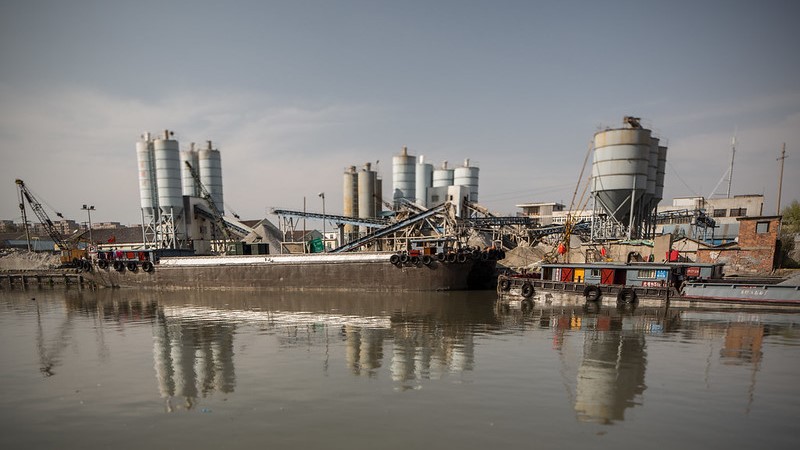 How to price carbon across borders is set to become a defining issue of the three-way relationship between the US, China and the EU.

As president Joe Biden reengages the US in international climate cooperation, the dynamic between the world’s three largest emitters will largely set the pace for decarbonising the global economy.

The EU and China have both committed to cut their emissions to net zero and Biden aspires to do the same, but they all start from different places. That raises tensions when it comes to trade in carbon-intensive products like steel, cement and chemicals.

The issue will be an “unavoidable topic” in Brussels’ relations with the US and China, Jennifer Tollmann, policy advisor at think-tank E3G told Climate Home News. “It can either be the biggest point of cooperation or risk becoming one of the biggest points of contention,” she said.

The misalignment of the EU, US and Chinese positions on the issue of carbon pricing “has the potential of flaring up relatively early this year,” warned Connie Hedegaard, of the KR Foundation and former EU commissioner for climate action. That “could end up being a bit dangerous and sour the atmosphere,” she said.

The EU has made its Green Deal – a sweeping plan to bolster green growth and job creation while cutting emissions across the whole of the economy – its top political priority.

To achieve this, Brussels is planning to establish a carbon price on imports that would prevent European companies being undercut by competition from countries with lower environmental standards and no price on carbon. The European Commission is expected to publish its proposal in June.

While Biden supports a similar “carbon adjustment fee against countries that are failing to meet their climate and environmental obligations” at the US border, he has much work to do on domestic policy first.

Beijing has pushed back against climate “protectionism”, yet in practical terms is better prepared than Washington for the trade implications, having established an institutional framework for pricing carbon.

China recently launched a nationwide carbon market, requiring power generators to buy pollution permits if their plants overshoot carbon intensity targets. There is no such scheme at the federal level in the US.

Reconciling these differences will put EU officials’ mediation skills to the test.

In the six years since a bilateral US-China deal laid the groundwork for the Paris Agreement, relations between the two superpowers deteriorated, while Brussels stayed engaged with Beijing on climate issues. Now, the EU “can play a role as a vital diplomatic bridge”, said Hedegaard.

In this three-way dynamic, “Europe is central” but does not solely serve as an intermediary between Washington and Beijing, said Emmanuel Guérin, executive director for the international group at the European Climate Foundation.

The EU is making a case for clean technology and high environmental standards to give a competitive advantage. This “dynamic of competition” could spur race to the top between the three largest polluters, Guérin said.

The proposed carbon border adjustment mechanism is “not just a commercial instrument but a tool to drive greater climate action beyond its borders,” he said.

The EU has been eager to engage with the new US administration on a transatlantic green trade agenda and wasted no time in raising the issue with the Americans.

In its vision for a “new EU-US agenda for global change” published last month, the Commission urged Washington to “work closely together on emissions trading, carbon pricing and taxation”.

It cited the EU carbon border adjustment mechanism as “an opportunity to work together to set a global template for such measures,” with a proposed EU-US summit in the first half of the year to deepen the discussion.

But Timmermans also insisted the EU would go ahead with a unilateral carbon border tax, describing it as “a matter of survival for our industry”. “So if others will not move in the same direction we will have to protect the European Union against distortion of competition and against the risk of carbon leakage.”

For Sébastien Treyer, executive director of Paris-based think tank Iddri, this early dialogue on trade and climate is a strong basis for Washington and Brussels to build “a common discourse” on carbon pricing before engaging with China.

A border mechanism “could become politically toxic” and “threaten the overall deal of the Paris Agreement” if it is understood as building a protectionist agenda, Treyer told Climate Home. A joint US-EU position would help avert conflict.

And yet, while Washington and Brussels “will need to agree on the top lines of what is credible [climate] action and ambition for China,” on the practicalities of a carbon border tax the EU may find it easier to align with Beijing, Tollmann said.

Comment: The Biden-Harris administration can rebuild democracy and climate action

At the federal level, the US is not ready for a carbon pricing system, said John Podesta, chair of the Center for American Progress and former adviser on climate to Barack Obama’s administration.

“It’s coming but I think it might not be coming in the next two years,” he said, citing “a lot of ferment” in favour of the idea amid Republican economists and business leaders.

The US Chamber of Commerce recently changed its climate position to back “a market-based approach” to cutting emissions in the US. Biden allies in the business community are reportedly working on a set of proposals, including a carbon tax, to fund $2 trillion infrastructure plan. And carbon pricing is supported by Biden’s treasury secretary nominee Janet Yellen.

“But I remain sceptical that there is a point of bipartisan agreement around an economy-wide pricing strategy. There is still considerable opposition among the Republican electorate,” Podesta said.

In the short-term, there is a “big risk” the carbon border tax will become confrontational between the EU and China, Li Shuo, senior climate and energy officer at Greenpeace East Asia, told Climate Home. But Beijing is likely to establish an economy-wide carbon pricing scheme that could align with the EU’s mechanism before the US, he said.

While China has introduced a carbon market for the power sector, the European proposal would put pressure to expand its emissions trading scheme to other sectors and raise the price of pollution.

That will take some time, Li said, leaving a “very big gap” for Chinese exports to Europe such as steel or cement to be taxed in line with the union’s carbon price. “The politics will be very tough for the next few months.”

As the US and Europe renew cooperation on climate, the framing of this transatlantic relationship will be key, Li added, warning against ganging up on Beijing. This “risks alienating China, which we cannot afford”.