Japan labelled loans for roads and bridges as “climate adaptation” finance, while the World Bank counted support for Nepal to rebuild from an earthquake 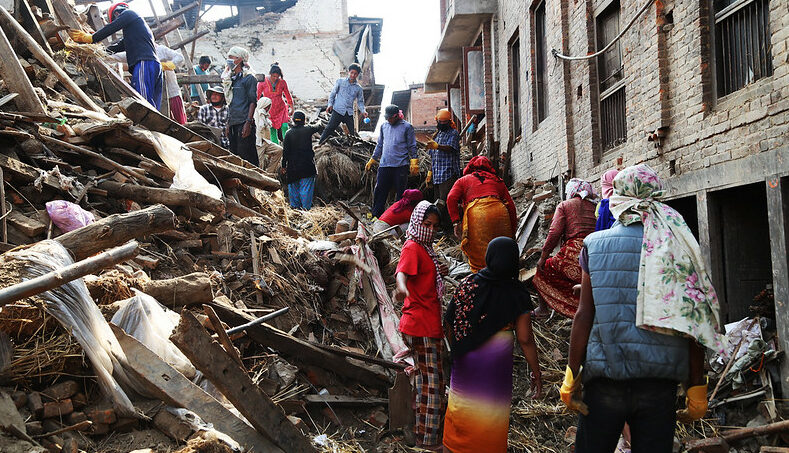 Earthquakes are geohazards, not caused by climate change, but the World Bank counted funds for reconstruction in Nepal as "climate adaptation" (Photo: Flickr/Sanitation and hygiene fund)

Rich nations have exaggerated how much funding they provided to help the world’s poorest countries cope with climate change impacts such as flooding and drought, according to analysis by charity Care International.

A close reading of 112 projects representing 13% of global adaptation finance in 2013-17 found the 25 donor countries collectively overreported the amount supporting climate adaptation by 42%.

Under the UN climate process, the developed world has committed to mobilise $100 billion of climate finance a year by 2020, with a balance between mitigation (carbon-cutting) and adaptation projects. At the last count in 2018, they delivered $16.8 billion in adaptation finance, according to the OECD – but if overreporting levels persisted the true amount could be less than $10bn, Care said.

“It really shows that rich countries are not as concerned about living up to their climate commitments as they should be,” John Nordbo, report co-author and senior climate advocacy adviser at Care Denmark, told Climate Home News.

“We have become rich by polluting the atmosphere and creating the climate problem. We try to trick [developing countries] by telling them we provide more money than we actually do. It is a disgrace,” he said.

The report published on Thursday singled out Japan as one of the biggest offenders, with overreporting of $1.3 billion. “It labelled projects that have nothing to do with climate adaptation as adaptation finance, such as loans for road and bridge construction projects,” said Nordbo.

The World Bank overreported funding for adaptation by $832 million. It labelled 86% of the $328 million spent on an earthquake rehousing project in Nepal as adaptation finance, when the project was responding to a geohazard not caused by climate change.

France exaggerated its adaptation finance by $104 million. It declared that $93 million went towards climate adaptation as part of a programme strengthening local governance in the Philippines. Closer analysis showed that just 5% of the budget was earmarked for adaptation, the report noted.

Last month the world’s poorest countries called on rich nations to provide more funding to help them adapt to climate change. UN chief Antonio Guterres urged donor governments and development banks to commit to directing at least 50% of their climate finance towards adaptation and resilience before Cop26 next year.

“Until now adaptation represents only 20% of climate finance, reaching only $30 billion on average in 2017-2018,” he said at the Thimphu ambition summit.

This month the UN Environment Programme warned that annual adaptation costs in developing countries could reach $300 billion by 2030.

The Care report was published ahead of a UN Climate Adaptation Summit 25-26 January, where world leaders will discuss strengthening adaptation finance ahead of Cop26 in November.

“I hope that governments from the Global South will bring it up and that donors will begin to put more energy into making their systems reliable,” said Nordbo.