Comment: With strong business support and an experienced team of dealmakers, Biden inspires confidence he will deliver on his climate and environmental justice plan 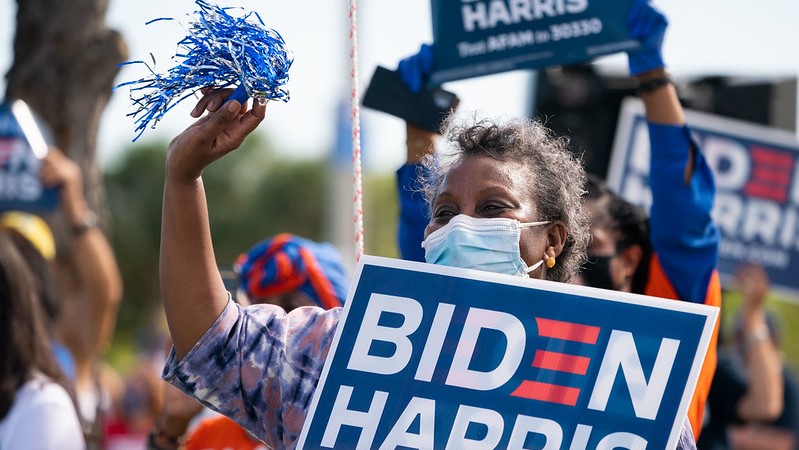 A woman cheers for Joe Biden at a drive-in rally in Florida. (Photo: Adam Schultz / Biden for President/Flickr)

If you believe in democracy, last week’s violent insurrection at the US Capitol was hard to watch.

Incited by four years of divisive leadership, white supremacists stormed the halls of Congress, killing five people and injuring many others in an attempt to overturn a legitimate election.

While accountability must precede “unity” among lawmakers, democracy triumphed when the election results were confirmed and members on both sides of the aisle called for the removal of president Trump.

A robust, inclusive democracy is the only system capable of addressing climate change in the US.

This week, the Biden-Harris administration will embark on an approach to climate change rooted in science and environmental justice. President-elect Joe Biden’s understanding of the interwoven crises of Covid-19, racial injustice, economic insecurity and a warming world positions him well to address these challenges.

In particular, three factors inspire confidence in his success on climate:

Biden has pledged to immediately file up to 10 executive orders to tackle climate change, including rejoining the Paris Agreement and banning new oil and gas permits on public lands including in the Arctic National Wildlife Refuge. He is expected to revoke the permit for the Keystone XL Pipeline

Taking these initial, vital steps will signal to the world that Biden is serious about healing the wounds inflicted by the former administration.

More broadly, Biden’s ambitious climate action and environmental justice plan is responsive to the latest findings in climate science and the equitable distribution of environmental burdens and benefits. It is based on extensive stakeholder input and an unequivocal acknowledgement of the disproportionate impacts that rising temperatures place on communities of colour.

We can look forward to Biden’s stated commitment of net-zero emissions by 2050 with a 100% clean electricity sector by 2030.

Biden’s plan takes a “whole of government approach” with all federal agencies incorporating climate science into their actions. He will implement administrative and regulatory rules that will limit heat-trapping emissions across the economy, while also advancing climate resilience and investing in historically marginalised communities. Never has an incoming administration offered such a thoughtful, thorough and transparent climate action roadmap.

Most importantly, Biden’s climate plan is bipartisan. In a new survey of US voters polled after the election, a majority of Americans from both parties agree global warming should be a high or very high priority for the president and Congress.

Voters from both parties back the policies Biden is proposing, including developing sources of clean energy and setting tougher fuel efficiency standards for vehicles while a full 83% of voters support creating a jobs programme that would hire unemployed oil and gas workers to safely close down thousands of abandoned oil and gas wells which are a source of water and methane pollution.

Biden has assembled a team of talented environmental and climate experts; his picks are seasoned dealmakers who can hit the ground running.

The lineup includes Michael Regan, the first African American man to lead the Environmental Protection Agency after serving as the top environmental regulator in North Carolina, and Brenda Mallory, who hails from the Southern Environmental Law Center at the helm of the Council on Environmental Quality.

We also look forward to working once again with John Kerry, who as secretary of state was an architect of the Paris Agreement, Gina McCarthy, the no-nonsense former head of the EPA responsible for crafting key policies for slashing carbon emissions, and Janet McCabe, who helped author Obama’s Clean Power Plan.

Add the historic selection of Deb Haaland, the first ever Native American to head up the Department of the Interior, and the cast of brilliant deputies, including Ali Zaidi, an expert in renewable energy, and you have a diverse group of public servants who deserve our trust.

With confirmations likely to pass in the Senate, Biden can swiftly get his team in place. He can count on Senator Chuck Schumer, who is taking over as Senate majority leader, to set an agenda that supports durable, bipartisan climate action. Not only is Biden comfortable with uphill battles in the Senate, but his top appointees themselves have experienced political conflict and have mastered the nuances of negotiating across the aisle.

Finally, Biden has a deep bench of supporters who will have his back as he seeks to “build back better”. Among these are nearly 1,500 US leaders, including many influential investors and companies who declared  “We are All In”  in reference to Biden’s commitment to re-join the Paris Agreement last December, together with more than 200 US companies that have set science-based targets to reduce their greenhouse gas emissions.

Last May, Ceres brought together more than 330 representatives and CEOs from companies both large and small for LEAD on Climate 2020 to call on lawmakers on both sides of the aisle to support a “climate sensitive” recovery. It was the largest business-led advocacy day for climate action in US history.

Those same companies will be back this year with a resounding show of support for Biden’s far-reaching plan. Leading businesses know that corporate commitments and corporate advocacy must go hand in hand. Smart, technology-forcing policy spurs business innovation and investment that ultimately helps companies meet their ambitious climate goals.

Forward-thinking public leaders across the US have set impressive climate goals and are also ready to back Biden’s plan. Last July, 15 governors pledged to work together to accelerate the deployment of zero-emission trucks and buses, the largest ever multi-state collaboration to decarbonise transportation.

In December, several Northeast states launched a groundbreaking cap-and-invest program to cut transportation emissions, provide clean transportation options and invest in communities long burdened by vehicle pollution. Both efforts were backed by major companies and institutions of higher education that are committed to policies designed to expedite the adoption of electric vehicles and foster improvements in air quality.

Bottom line: as he works to reinvigorate US climate policy, Biden can count on support from a wide range of community, business, political and financial leaders.

Biden knows that acting on the climate crisis means investing in a better future that will protect not just some but all Americans. If you believe in democracy and climate action, Biden’s first term will be a joy to watch.

Anne L. Kelly is the vice president of government affairs at the sustainability nonprofit organization Ceres