In a message to the UN, Brazil’s president denied responsibility for the worst fires on record in the Pantanal, despite having slashed environmental protections 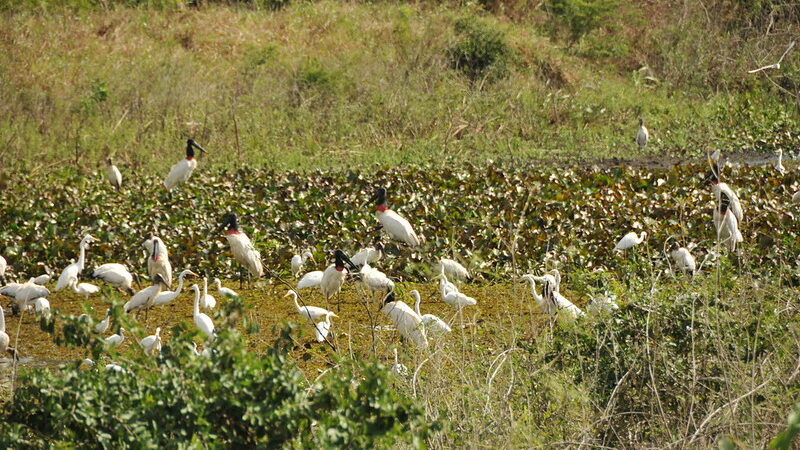 As the world’s largest tropical wetland burned, Brazil’s president on Tuesday hit out at critics of his administration’s environmental record.

Fires in the Pantanal were “the inevitable consequence of hot local temperatures coupled with the accumulation of decaying organic matter,” Bolsonaro claimed.

Observatório do Clima, a network of Brazilian environmentalists, called the president’s denials “delusional”.

“He denounced a non-existent collusion between NGOs and foreign powers against the country, but, by denying reality and not presenting any plan to solve the problems we face, Bolsonaro is the one who threatens our economy,” said Marcio Astrini, executive secretary at Observatório do Clima.

“Brazil will pay the price for his irresponsibility for a long time. We have a president who sabotages his own country”.

The increase in fires is thought to be driven by a combination of climate change, deforestation and the actions of cattle farmers. According to NASA, the December 2019 to April 2020 wet season was unusually dry.

This left the Pantanal more vulnerable to fires spreading during its July to October 2020 dry season. Many of these fires were started deliberately by cattle farmers on the plateaus surrounding the Pantanal to clear space for their cows to graze.

In his speech Bolsonaro blamed Amazon rainforest fires on indigenous people “burn[ing] their farmland in search of livelihood in already clear areas”. He has previously blamed indigenous people for the Pantanal fires.

According to the Guardian’s analysis of satellite images though, fires which hit the Pantanal’s Baiá do Guató indigenous reserve started outside its borders.

Green groups have blamed Bolsonaro’s policies for the fires, accusing him of stripping power and resources from the agencies that are meant to enforce environmental protection.

In his first weeks as President, Bolsonaro downgraded the role of his Environment Ministry and removed the words “climate change” from its mission.

In 2019, Bolsonaro sacked his space agency chief for providing data which showed that deforestation was increasing. Bolsonaro said the data was “sensationalism” but, at the time, other researchers told Climate Home News that the agency’s data were too conservative if anything.

Opposition congresswoman Fernanda Melchionna said in a statement: “The dismantling of Brazilian environmental policy, underway in the Bolsonaro administration, is extremely serious and is causing incalculable loss for Brazil.”

She accused the government of “militarization of research and environmental inspection bodies, the emptying of the Ministry of the Environment’s actions, the refusal to enforce budgetary rules and the failure to take available action to prevent and fight deforestation and fires.”

Bolsonaro’s plan to unlock the Amazon: split its indigenous people

André Luiz Siqueira, director of Ecology & Action told the BBC that “the Federal Government strengthens the sense of impunity” for farmers who start fires.

Deforestation in the Amazon has been linked to droughts across South America, contributing to fires like those on the Pantanal.

This is because rainforests like the Amazon produce ‘flying rivers’, where moisture rises into the air and is transported across South America before becoming rain. When the rainforest is cut back, these ‘rivers’ become streams.

Deforestation in the neighbouring Cerrado region also damages the Pantanal. Without tree roots holding the soil in place, the rain washes more sediment into the River Paraguay. That sediment ends up in the Pantanal, silts up its waterways and dries out the region.

Bolsonaro is facing pressure from world leaders over the devastation. Last August, as the Amazon burned, the German and French leaders called emergency talks on the fires at the G7 leaders’ summit.

France has since threatened to oppose the trade deal between the EU and South America’s Mercosur unless all nations, including Brazil, commit to honouring the Paris climate agreement.

Bolsonaro has hit back by calling France’s Emmanuel Macron a “colonialist” and “sensationalist”. In Tuesday’s UN speech, he said Brazil was the world’s largest food producer and “for that reason, there’s so much interest in spreading disinformation about our environment”.

Pressure has also come from financial institutions, 29 of which threatened to divest from Brazil unless it does more to combat deforestation. These investors manage nearly $4tn worth of assets.

Bolsonaro is also under pressure at home. On the same day as his UN speech, the Brazilian Supreme Court was deciding whether he had acted unconstitutionally in failing to make full use of the National Fund on Climate Change.

The fund was set under President Lula’s government in 2009 to allow public authorities, co-operatives and private companies to reduce their emissions and better prepare for the effects of climate change.

The opposition parties bringing the court case accuse the government of disbanding the climate change secretariat, which was responsible for the climate fund, and abolishing the fund’s steering committee.

Those bringing the case say that much of the fund’s R$508m (US$93m) budget had not been spent. Suely Araújo, from the Observatório do Clima, accused the government of “calculated inaction” and adopting an “environmental anti-policy”.

Bolsonaro faces presidential elections in 2022. His latest approval ratings show an even split. Around 39% of Brazilians approve of him while 34% disapprove.