Congress is blocking Brazil’s leader from expanding farming on indigenous lands, now he is making alliances with some traditional landowners 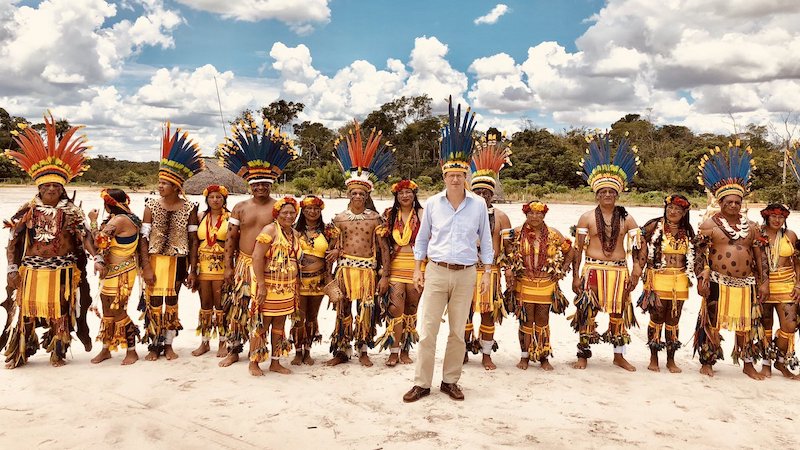 Ricardo Salles, a 43-year-old lawyer from industrial São Paulo, had never set foot in the Amazon basin when he became Brazilian president Jair Bolsonaro’s environment minister in January. He chose to start with a celebratory visit to an illegal soybean plantation inside indigenous territory.

The visit to Utiariti indigenous land, in Mato Grosso state, happened with great fanfare. Salles was joined by the minister of agriculture Tereza Cristina and Olivaldi Azevedo, the new director of Brazil’s environmental law enforcement agency Ibama. They received indigenous adornments from the hosts, the Paresi people, and mounted a combine harvester to celebrate the beginning of the harvest season.

Seven months before the visit, which took place in February, Ibama went there for an entirely different reason. They embargoed 22,000 hectares of GMO soybean plantation. According to Brazilian legislation, it is illegal to grow GMOs inside protected areas.

The fines, which included other environmental crimes, mounted to $34.5 million. 90% of this amount was levied on white farmers who leased the land, which is also illegal, and the rest on indigenous organizations.

In addition to the environmental lawbreaking enforced by Ibama, the plantation is also in breach of the Brazilian constitution, which forbids anyone but indigenous peoples from farming on land demarcated as indigenous.

Bolsonaro wants to make this all legal. In the past few months, members of his government have advocated that indigenous lands should be opened to non-indigenous farmers and miners. The first activity requires a change in the constitution, the latter depends on the approval of specific legislation. They say the changes will benefit the traditional landowners.

“The law needs to change urgently so the Indians do not live on the sidelines and instead receive royalties or work in agriculture,” Tereza Cristina told a congressional hearing in late February. “They have 13% of Brazilian territory and can not put their hands on this wealth to live with dignity.”

Making the legal changes is proving difficult. Four months into his presidency, Bolsonaro’s priority is to gain approval for a comprehensive pension reform. That is eating up his political capital in the Congress. In a first vote this week, a bill to restructure the federal government, including moving indigenous land demarcation from the ministry of justice to the beef-caucus controlled ministry of agriculture, suffered a painful defeat.

Bolsonaro knows he needs to win the battle for public opinion. That’s where the Paresi come in. On April 18, in anticipation of a massive indigenous protest in Brasília a few days later, Bolsonaro appeared in a live Facebook transmission surrounded by five indigenous leaders who support his government in opening their territory to large scale economic activities.

Normally unrestrained, Bolsonaro has publicly curbed his racist views on indigenous peoples (in 1998, he famously said that “it’s a shame that the Brazilian cavalry hasn’t been as efficient as the Americans, who exterminated the Indians”). Instead, he said that they have the right to explore their land “without intermediaries”. He accused international NGOs of being “enemies” and criticized Ibama’s fine. 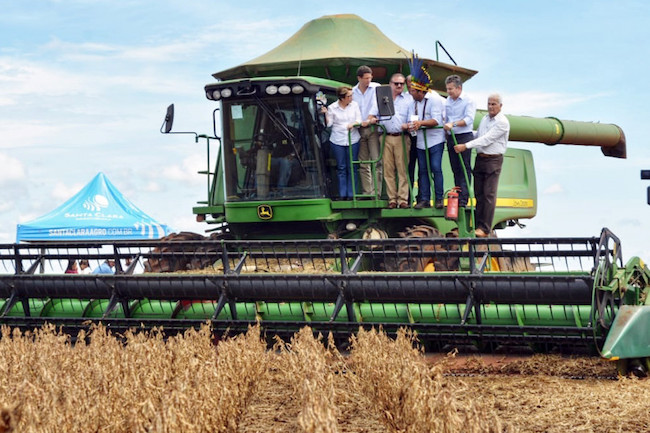 “Our more humble brothers were fined by Ibama,” he said, without explaining that most of the fine went to white farmers. “That’s why, along with Salles, we are taking measures to replace this kind of people. These people [the Ibama agents] are not Brazilians.”

Beside Bolsonaro, Paresi leader Arnaldo Zunizakae said that he is part of a movement of indigenous producers who want to open their lands to commercial agriculture, mining and logging. The goal, he said, “is to improve our life quality, fulfilling the need for food, the necessity to occupy our lands and improvements in education and health. We want to contribute to the development we see around us, yet we live in poverty on a land the constitution says is ours.”

Zunizakae has admitted breaking the law by leasing to white farmers, but he argues they now have learned how to produce commercial soybeans on their own and now no longer need non-indigenous lessees to grow their crops in the cerrado biome.

Most of the land Bolsonaro wants to open to agriculture and mining is in the Amazon basin. Indigenous territories in the region cover an area twice the size of Spain and are important buffers against forest loss. Only 1.3% of indigenous land has been deforested, according to the NGO Imazon, much less than the 20% of forest cleared in the Amazon region as a whole.

The government’s tactics of backing the Paresi, which has illegally leased their land for soybeans for about 15 years, has posed a challenge to the indigenous movement. They argue that opening their lands to extractive industries threatens their cultural and social survival. While organisations such as Apib (Brazil’s Indigenous People Articulation) have fiercely opposed Bolsonaro, they avoid publicly criticising the Paresi.

“They have got some Indians, but the indigenous movement is cohesive, we do not want this genocidal policy that only interests them, that opens indigenous lands for mining, livestock, soy,” she said. 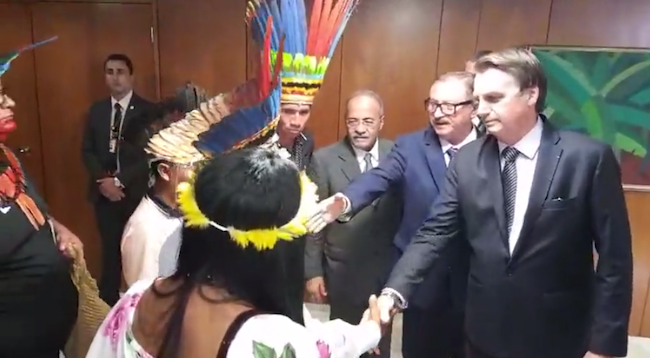 Arnaldo Carneiro, one of Brazil’s top researchers on soybean production in the cerrado’s tropical savanna, told Climate Home News the current model was inappropriate in indigenous territory (although he is not familiar with the Paresi experience). For him, soybean expansion should be done on already deforested areas, such as cattle pasture.

“It is a model with a very low sustainability. It is heavily based on costly agricultural inputs. Moreover, the impact of agrotoxins causes several problems for the surrounding populations. It is far from a production mode that can bring benefits for the indigenous peoples,” said Carneiro, who is a senior researcher at National Institute of Amazonian Research (INPA).

“The territories could have a much larger appeal with other production systems that stress its geography, ethnicity. This is not the soybean market, which will not see a difference between a Paresi product and other producers. They will not have any market advantage,” he said.

All this represents a more nuanced approach from Bolsonaro, compared to the fire and fury of his initial days. According to Marcio Astrini, Greenpeace Brazil’s public policy coordinator, the president has abandoned abrupt major moves, such as annexing the ministry of environment into the ministry of agriculture. Instead, Astrini said, his government is pushing small, gradual changes that undermine its own environmental agencies.

As for the soybean, he sees Bolsonaro’s plan as a threat to the landmark soybean moratorium, the 2006 pact between productive sector, government and civil society, including Greenpeace and WWF, aimed at preventing the sale of soybean from deforested areas in the Amazon region.

“The consequence of opening new areas is more deforestation. If one has the federal government pushing deforestation in to the rainforest, it will be harder to enforce the agreement,” said Astrini.