The Brazilian president forced a top science official out of his job, in a move experts warned could harm the credibility of agricultural exporters 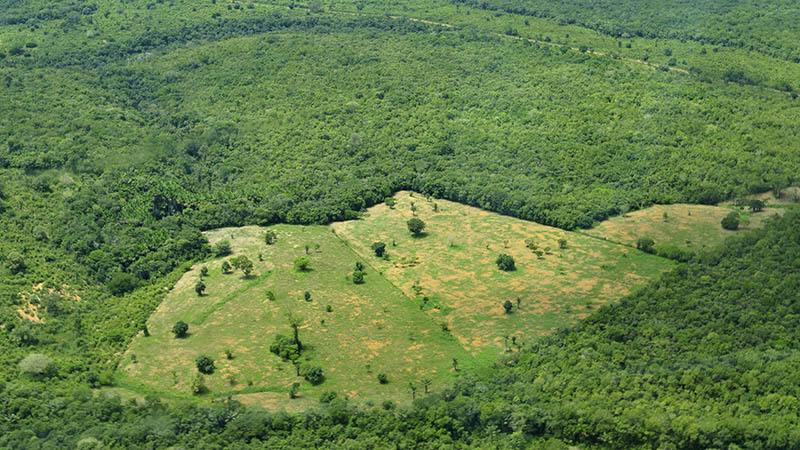 The Brazilian government is under fire for denying scientific evidence, after president Jair Bolsonaro sacked the head of the country’s space agency over deforestation data.

Ricardo Galvao, the head of Brazil’s National Institute for Space Research (INPE) – the agency which provides official data on the country’s deforestation rate – was fired after Bolsonaro dismissed INPE’s latest report as “a lie”.

The latest data released by INPE shows that deforestation has increased 40% in the last two months compared to the same period a year ago.

Bolsonaro accused the agency of overstating the scale of destruction, saying: “We cannot accept sensationalism, or the disclosure of inaccurate numbers that cause great damage to Brazil‘s image.”

However experts defended the agency. Paulo Barreto, a senior researcher at NGO Imazon, told Climate Home News said if anything the monthly reports erred on the conservative side. INPE’s annual reports, which are based on higher resolution satellite images, have a 95% accuracy rate, he said.

In an interview with Brazilian newspaper O Estado de S. Paulo, Galvao called Bolsonaro a “coward” for attacking his record without meeting him face to face.

“[Galvao] knew he was exposing himself but he did it for the sake of science,” Carlos Rittl, a scientist and the executive secretary of Brazilian NGO Climate Observatory told CHN.

The row has put the Bolsonaro administration under the spotlight, drawing further attention to surging rainforest destruction in the Brazilian Amazon.

INPE is seen as the authority on deforestation and land-use changes data from Brazil. It uses satellite images to produce monthly and annual reports on the rate of deforestation across the country.

Following Galvao’s dismissal, Brazil’s environment minister Ricardo Salles said methodologies for measuring deforestation would be changed and the government would use new technology with greater precision to monitor land use changes.

For Rittl, the use of a monitoring system with higher resolution satellite images is likely to paint an “even worse” picture, rather than fit Bolsonaro’s agenda to open up protected areas of the forest for agriculture and logging.

“Bolsonaro has not yet understood the implications for trying to hide the science,” Rittl said, pointing to the Brazilian economy’s heavy reliance on exports, with the prospect of large markets like the EU closing their doors to deforestation products.

Last month, the EU Commission announced it was considering imposing regulation on the supply chains of companies importing into its market, in a bid to tackle forest clearance abroad.

Meanwhile, the Mercosur trade agreement signed between the EU and the South American trading bloc includes a commitment to tackle deforestation – although critics have raised concerns over the lack of enforceable safeguards.

“If we lose more forests, I think at the end of the day we will lose more markets,” Rittl said. “Right now, the EU will have to play hard on the Brazilian government.”

Barreto agreed denial of the science brought economic risks, noting that agribusiness companies were “under pressure from investors to disclose the impacts of deforestation and climate change”.

Douglas Morton, chief of the Biospheric Sciences Laboratory at Nasa’s Goddard Space Flight Center and an adjunct professor at the University of Maryland, said INPE had long been at the forefront of a transparent system of data collection which informed government policy.

INPE’s annual reports are based on available Nasa satellite images. That means campaign groups and academics around the world can independently analyse the same raw information, checking the official figures.

Those currently providing near real-time monitoring of the Brazil’s rainforest include Imazon, Global Forest Watch, a network of organisations and academics known as MapBiomas led by Climate Observatory, the University of Maryland and the Brazilian army.

Morton said INPE was critical because its reports have long been used across government agencies to develop Brazil’s environmental policies and manage the country’s resources.

“I worry more about the interruption of this information flow which would impede informing government legislation,” he said.

And the issue is not limited to the Brazilian government. Morton told CHN international observers, supply chains and investors may have to transition to use external estimates such as NGO reports to inform their policies on deforestation.

In previous years, the head of INPE has been chosen by the Brazilian government from a shortlist of three compiled by a committee of scientists. Whether the same procedure will be used by Bolsonaro’s government to replace Galvao is yet unknown.