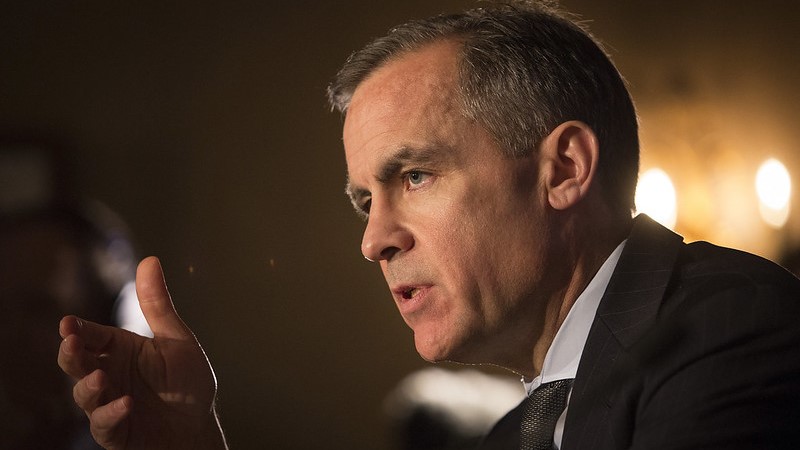 Mark Carney told investors and bankers from the City of London that investments in the net zero emissions economy will have to become mainstream in the run-up to Cop26. (Photo: Simon Dawson, Bloomberg/ Bank of England/Flickr)

Every private finance decision must take into account climate change and how to decarbonise the world economy to net zero, incoming UN special envoy on climate action Mark Carney has told banks and investors.

Setting out strategies to mobilise private finance ahead of the UN climate talks in Glasgow, or Cop26, Carney said such investments “could become the greatest commercial opportunity of our time”.

Appointed special advisor on climate finance to UK prime minister Boris Johnson, Carney, outgoing governor of the Bank of England, made the remarks at the heart of the City of London on Thursday.

“Achieving net zero emissions will require a whole economy transition – every company, every bank, every insurer and investor will have to adjust their business models,” he added.

“This could turn an existential risk into the greatest commercial opportunity of our time.”

Carney said that achieving a whole economy transition wasn’t “about funding only deep green activities or blacklisting dark brown ones”. “We need fifty shades of green to catalyse and support all companies toward net zero,” he said.

Finance has been identified as a key priority and a cross-cutting theme of Cop26 by the UK presidency, which said it will help deliver all other objectives.

Rich countries have promised to mobile $100 billion per year by 2020 to help developing countries curb emissions and cope with climate impacts. Huge investments are still needed to deliver that goal.

At the UN climate talks in Madrid in December, China, India and Brazil insisted the delivery of this commitment was a precondition for any discussion on enhancing their climate pledges.

Countries are under pressure to submit tougher 2030 climate targets and publish long-term decarbonisation strategies before the start of Cop26.

Cop26 president and the UK minister for business, energy and industrial strategy, Alok Sharma, told the City audience “unleashing the finance which will power the shift to a zero-carbon economy” had to be the focus in the run-up to conference.

Sharma quoted Organisation for Economic Co-operation and Development (OECD) estimates that found nearly $7 trillion per year throughout the next decade was needed to meet both the temperature targets of the Paris Agreement and the Sustainable Development Goals (SDGs).

“Much of this funding needs to come from the private sector,” he said, noting the key role of Multilateral Development Banks (MDBs), including the World Bank. Carney added the UK will ask MDBs to “develop robust implementation plans” aligned with the Paris Agreement before Cop26.

Christine Lagarde, president of the European Central Bank (ECB), agreed on the vital role central banks needed to play ahead of the summit. But she called on the financial sector to re-think “the principles that have constantly applied” to the financial system.

“We can all do something. And in doing so you start questioning conventional wisdom, the ways things have been done,” she said.

Lagarde warned that prompt commitments by governments to ramp up ambition was essential to deliver “a smooth transition for the economy”.

“But if that intervention is delayed the reduction in emissions may have to be sharper, faster, resulting in a disorderly, disjointed and more disrupted transition for the economy,” she said.

Ahead of the summit, Sharma also said the UK will support “private sector coalitions” to identify the climate impacts of their portfolios and loans.

This comes after Nigel Topping, the UK’s climate action champion, told Climate Home News he would focus on building coalitions of ministers and non-state actors to bring about “tipping points” for change in specific sectors.

These coalitions will result in “big announcements” at Cop26, he said.