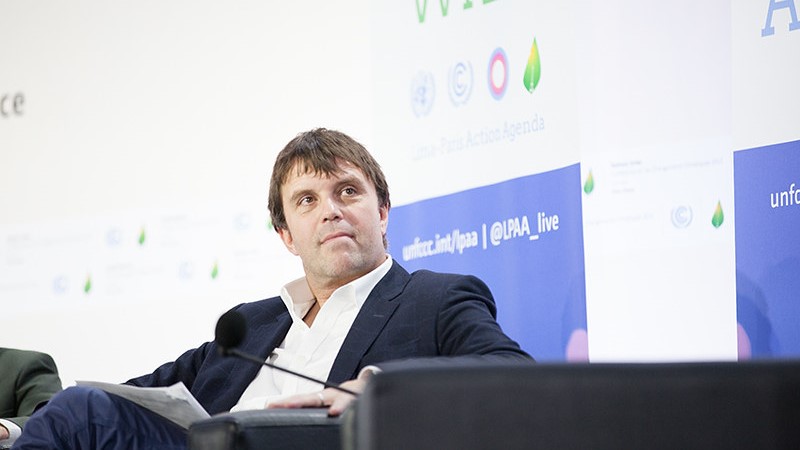 Nigel Topping said he hoped 60% of world economic output will be generated in areas which have a 2050 goal of net zero emissions by the end of the UN climate talks in Glasgow, in November, up from 49% now in an estimate by the Energy and Climate Intelligence Unit think-tank.

Besides the huge diplomatic efforts the UK presidency needs to deliver ahead of the critical UN negotiations, or Cop26, cities, states, regions, businesses and investors are under growing pressure to play their part in propelling the world into a decade of ambitious climate action.

For Nigel Topping, that means re-thinking the interaction between national governments and non-state actors to create a global movement that can wean the global economy off fossil fuels.

Topping, who was appointed by the UK presidency to drive climate ambition alongside Chilean Gonzalo Muñoz, warned the divide between state and non-state actors “has been a bit too rigid in the past”.

Speaking to Climate Home News in London, the former CEO of We Mean Business, a coalition of companies working to accelerate the transition to a zero carbon economy, said: “We need to recognise that it’s a collective leadership problem.”

“How we bring coalitions of the ambitious together around these big systems transformations require everybody to act…that is what I am most keen to build on this year,” he said.

Countries are under pressure to enhance their 2030 climate plans and publish long-term decarbonisation strategies ahead of Cop26, to bridge the gap between current levels of commitments and what is needed to limit warming to 1.5C by the end of the century – the tougher goal of the Paris Agreement.

To act as a driving force besides political negotiations, Topping said both the private sector and local governments will need to come up with pathways to achieve carbon neutrality by mid-century.

After the last climate talks in Madrid, 15 subnational governments, 398 cities, 786 companies and 16 investors with assets of $4 trillion committed to being carbon neutral by 2050, according to the Chilean presidency.

For Topping, the number of non-state actors that pledged to reach net zero emissions by 2050 needs to increase tenfold before Cop26, noting that such commitments are only meaningful if they include “clarity on a long-term goal and clarity of short-term action”.

That, Topping said, would send “a resounding signal to the world’s governments that everybody else is getting on with it, so you can do it to, and you must and we want you to”.

At the Glasgow summit, Topping envisioned events that would gather ministers and non-state actors representatives, including mayors, CEOs and campaigners to spur innovation and move the dial on sector-specific issues such as energy, transport, and housing.

These events would act as “ambition loops between different actors,” he said.  And include “a mix of stockholders that between them really have the power to bring the transformation to a tipping point, when the markets and other governments basically have to follow”.

“We need to be really thoughtful about building the coalitions to get done what needs to be done. We can’t assume that there is a one size fits all,” he added.

Topping said he hoped to build sufficient coalitions to have “at least one big announcement a day” during Cop26, which runs from 9-19 November.

Real economy commitments will also help “embolden” countries to ramp up ambition Topping said, and provide evidence that some aspects of the transition are already underway.

“We’re working hard to ensure that diplomatic outreach is informed by what’s going on with the non-state actors.”

Such information will be important in moments like the EU-China summit convened by Germany in September, Topping added, as Brussels hopes to broker a climate and trade deal with Beijing to ramp up its climate target.

Building these multi-stakeholder coalitions requires “rolling up your sleeves,” he admitted. But his encouragement comes from the fact “systems change exponentially” and that society can become more sophisticated at recognising the signs a transformation is underway.

He also said that reaching 60% of the world economy in areas with a goal of net zero emissions would be a stepping stone to much greater ambition in coming years.

“If we can get to 60% now then I think we have a reasonable chance of getting to 100% by 2025 and in the next ratchet-up cycle,” Topping said. Unlike countries, “non-state actors are not waiting five years” to increase ambition, he added.