Only one-fifth of climate finance going to adaptation, finds OECD

Donors overwhelmingly favour supporting projects that cut emissions rather than cope with the impacts of climate change, despite calls for parity 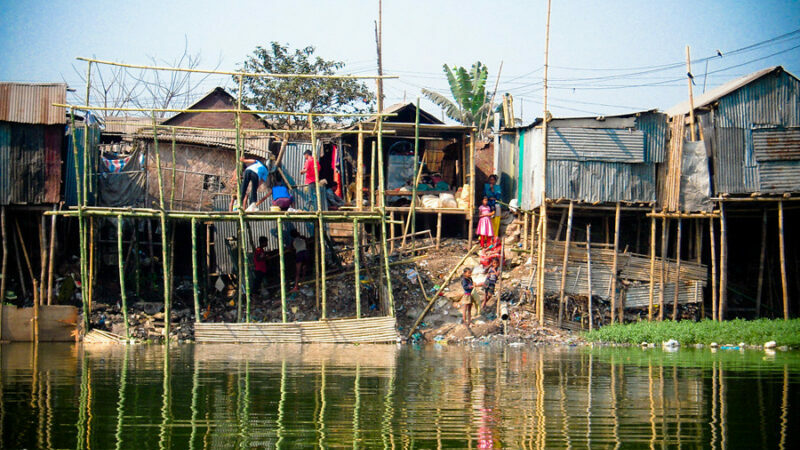 Efforts to help the most vulnerable countries cope with the impacts of the climate crisis remain under-funded compared with emissions cuts, according to a report from donor countries.

Analysis by the Organisation of Economic Cooperation and Development (OECD) – the group representing 36 of the world’s most developed countries – found that only 19% of climate finance mobilised in 2017 went to projects that helped communities adapt to climate change.

The vast majority of the money went to efforts to reduce emissions with 8% identified as serving both goals.

Developing countries have long pushed for climate finance to be evenly split between helping them to reduce emissions and to adapt to existing climate impacts. The UN’s Green Climate Fund aims to deliver a 50/50 split.

Saleemul Huq, director of the Bangladesh-based International Centre for Climate Change and Development, said the fact only 19% of climate finance had gone to adaptation in 2017, was “a great failure of the global community”.

The imbalance between cutting emissions and dealing with their effects is long standing and entrenched. In 2013, 17% of climate finance went to adaptation programmes, according to the OECD.

The report comes days after the Global Commission on Adaptation (GCA) warned that preparations to adapt to climate change were “not happening at nearly the pace and scale required”, warning that failing to do so could see agriculture yields fall by nearly a third by 2050.

Research by the World Bank also shows that without adaptation, the inequality gap will widen and climate change impacts could push more than 100 million people below the poverty line by 2030.

The OECD report analysed progress made towards commitments by developed countries to mobile $100 billion a year in climate finance by 2020 to help developing countries green their economies and cope with climate impacts.

Analysis of financial data up to 2017, found that the total climate finance mobilised by rich countries reached $71.2 billion, up from $58.6bn in 2016.

OECD secretary-general Angel Gurría said the $100bn goal was “still attainable”. “But we must urgently step up our efforts to provide public climate finance and improve its effectiveness in mobilising private finance,” he said.

Jan Kowalzig, an expert on climate politics at Oxfam’s German branch, told Climate Home News the OECD allowed countries to “grossly over estimate the climate relevance” of programmes the money is spent on. Something, he said, was particularly the case when considering projects labelled as climate adaptation.

Public finance has moved toward adaptation faster than the private sector. The OECD found that public money for adaptation, excluding export credits, increased by 65% between 2013 and 2017 to reach $12.9bn – faster than funding to reduce emissions, which increased by 38% to $36.8bn.

Both climate-related export credits and private finance were found to be almost exclusively provided for emission reduction efforts.

On Tuesday, the GCA made the case that investing in preparing for the impacts of climate could pay back the initial investment as much as ten times over, saving trillions of dollars by 2030.

According to the report, the use of loans to provide climate finance doubled between 2013 and 2017, whereas grant financing increased by 25%.

For Kowalzig this reinforced the issue that adaptation is “totally under-funded”. Loans “can hardly be used for adaptation,” he said, adding that such projects benefit better from the flexibility provided by grants.

Looking ahead to the $100bn goal, Kowalzig expressed cautious optimism. “An increase [of climate finance] in the past does not mean there will be an increase in the future,” he warned.