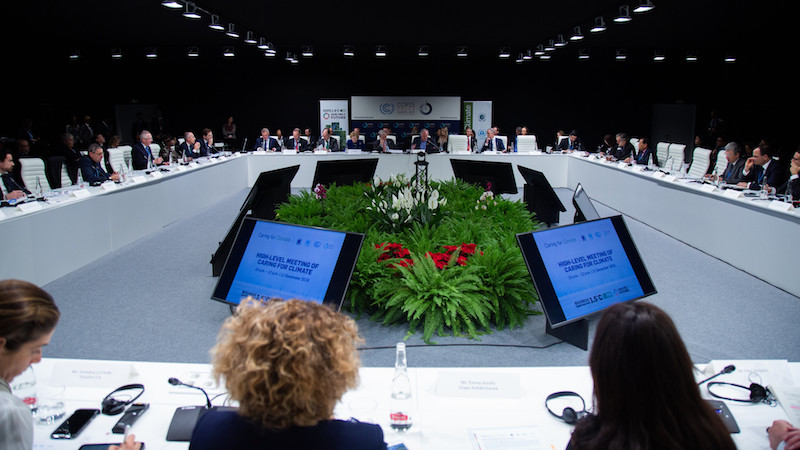 Ministers are meeting in Madrid, but they have failed to secure updated commitments from the largest polluters (Photo: UNFCCC)

MADRID –  As diplomats scramble to finalise the rules of the Paris Agreement at the UN climate talks, the world awaits a concrete sign of countries’ readiness to boost climate action.

If that arrives, it will be in the form of a legalistic ‘decision’ on ‘ambition’ approved by all nations as the Cop25 talks close in Madrid.

The Chilean Cop presidency had sought to convene a group of nations at into a vanguard for climate action.

On Wednesday, Cop25 president Carolina Schmidt announced that 73 small and developing countries had signalled their intention to enhance their climate plans and 72 countries working to achieve net zero emissions by 2050 joined a high ambition coalition launched in New York in September.

Meanwhile China, India, Brazil and Saudi Arabia have made no indications of their willingness to enhance their ambition. The US is leaving the Paris Agreement. Australia is on the record saying it will not change its goal.

“The world’s largest countries don’t want to be pushed to declare anything this year,” said Laurence Tubiana, head of the European Climate Foundation.

“We should not accept any type of silence on commitment,” said Spanish environment minister Teresa Ribera.

On the day Greta Thunberg was named Time Magazine person of the year for inspiring a wave of climate activism across the world, Jennifer Morgan, executive director of Greenpeace, said: “I have never seen the divide between what is happening between the inside of these walls and the outside so large.”

Much of the agenda for the meeting – in particular the unfinished rules of the Paris Agreement – has run into political deadlock.  But few lines of text in the final outcome referring to ambition will set the tone ahead of critical talks in Glasgow, UK, next year.

Under the Paris accord, countries have to revisit their pledges by 2020. Much rides on expectations countries will step up their ambition before Glasgow, rather than restate their existing target.

A draft decision text released by the Chilean presidency on Wednesday “recalls” a “request” for countries to “communicate new or updated” climate plans “that reflect their highest possible ambition”.

That wording doesn’t compel all countries to enhance their plans next year. But the Paris Agreement does say that any new plan must be a “progression” on the last.

For vulnerable countries which have urged governments to align their climate plans with limiting warming to 1.5C – the tougher goal of the Paris deal – that is not good enough.

Chair of the least developed countries group Sonam Phuntsho Wangdi, of Bhutan told CHN the language to “communicate” new climate plans was insufficient and called for the text to reflect the need for an enhancement.

“Submitting a climate plan is not good enough, it must be on a 1.5C pathway. Ambition has to be reflected in new climate plans, otherwise it has no meaning,” he said.

But Li Shuo, senior climate policy officer at Greenpeace East Asia, told CHN the language used in the draft echoed the wording of a China-France statement signed on the sidelines of the G20 in June.

If agreed, the text will show “China and the EU are steering the rest of the world” towards their own position, he said.

The EU releases its Green Deal. Here are the key points

The relationship between the EU and China is key for next year’s deadline. The EU hopes to broker a bilateral climate deal with China at a summit in Germany in September to leverage Beijing into increasing its climate plan.

On Wednesday, the EU Commission revealed its planned timetable for raising ambition as part of its green deal for Europe.

The schedule would enshrine the EU’s 2050 carbon neutrality goal in law in March and publish a “comprehensive plan” for a hiked 2030 target of “at least 50% and towards 55%” in the “summer 2020” – ahead of the September summit but leaving little time for member states to agree to the new target.

“I do believe there is a good basis for an agreement to be reached at the summit in September,” Frans Timmermans, the EU Commission’s executive vice-president, told CHN.

But inside the talks, China has set its red lines, making rich countries providing the finance and support promised to developing countries a condition for raising ambition.

In a statement, China, Brazil, South Africa and India, called for the creation of a work programme to close the gap of commitments made by rich countries before 2020.

“The ambitious implementation of developed countries’ commitments to provide support to developing countries is a precondition to any discussion on progression of current commitments,” the statement stated, adding progress on the issue “will be the benchmark of success for this Cop”.

Bringing emerging economies on board will be vital if the world wants to close the gap between national pledges and the goal to hold warming well below 2C and to 1.5C if possible.

Schmidt warned ministers that climate commitments made before 2020 are “a substantive base and a motor of trust for the implementation of the Paris Agreement” and “extremely important for the success of the Cop”.

US seeking further block on compensation for climate damage

A developing country negotiator told CHN holding rich countries accountable to their pre-2020 promises “should not be an excuse for not showing ambition”.

“We want to look forward,” said LDC chair Phuntsho Wangdi. “I’m not so sure it makes sense looking backwards. We know what has happened is not enough.”