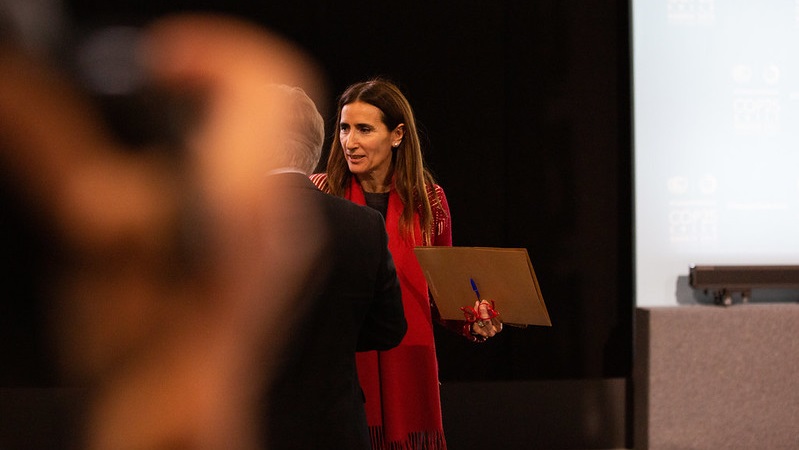 Chile's environment minister and Cop25 president Carolina Schmidt told her country's Congress she was "not satisfied" by the December talks' outcome but "did not feel shame". (Photo: UN Climate Change/Flickr)

Chile’s environment minister and Cop25 president Carolina Schmidt has blamed Brazil, Australia, China and the United States for blocking tougher action at the UN climate talks during a grilling in her country’s Congress.

“We are not satisfied, but it is not shame that we feel,” Schmidt told a two-hour session of Congress on Tuesday scrutinising her role in the December talks in Madrid.

“Shame would have been to deny the responsibility to fight for climate action when nobody else wanted to,” Schmidt told Congress of the outcome of the marathon 25th Conference of the Parties (Cop25), the longest in history, that ran two days into overtime.

Cop25 was initially due to be held in Brazil but far-right president Jair Bolsonaro withdrew the offer and Chile took over. The talks were eventually held in Madrid after social unrest in Chile against president Sebastian Pinera’s government forced a relocation.

Schmidt named Brazil, Australia, the United States and China as the main blockers at the conference. “We accomplished seven of the eight objectives that we had before Cop,” she said, “we managed to get countries to commit to more ambitious goals, to the protection of oceans, to incorporate a policy about gender”.

On Tuesday, the Chilean presidency released a list of 108 countries that have expressed an intention to enhance their climate plans this year. The list was not made public during the talks last month.

Under the Paris Agreement, countries are under pressure to ratchet up the ambition of their climate pledges every five years. The Madrid talks were intended to pave the way for countries to announce more ambitious targets by Cop26 in Glasgow, Scotland, in November 2020.

Chile’s Congress rejected calls by opposition parliamentarians including Félix González, from the Green Party, to start a formal process against Schmidt that could force her to resign, alleging that she personally bungled the negotiations.

In the final hours of Cop25, the Chilean presidency came under fire from climate campaigners and progressive countries after proposing a draft text that sought to achieve consensus on the lowest common denominator and removed calls for ramping up ambition.

“The Chilean presidency had one job, protect the integrity of the Paris Agreement and not allow it to be torn apart by cynicism and greed. And right now, it is failing,” Jennifer Morgan, executive director of Greenpeace, told reporters in Madrid before the end of the talks.

Commenting on the talks’ final text, Morgan said the Cop25 outcome was “totally unacceptable”. She denounced “an irresponsibly weak Chilean leadership” that enabled “climate blockers like Brazil and Australia” to have “peddled carbon deals and steamrolled scientists and civil society”.

In Congress, González said the eight objectives listed by the minister “had never been heard of before Cop”. The objectives were reported by Schmidt on the 16 December, the Monday that she arrived back in Santiago from Madrid.

“The second one is about countries that commit to carbon neutrality and the sixth is about cities and non-state actors that are part of the same Climate Ambition Alliance, you’re repeating the same objective twice”, complained González.

The Green congressman added he would continue to call for Chile to resign from the Cop25 presidency, which will last until the Glasgow summit when the UK’s Claire O’Neill is due to take over. “We need a country with true climate leadership to take this process forward”, Gonzalez said.

“It is our responsibility to demand answers for this global failure. The UN is not going to do it,” he told Climate Home News before the session.

Cop presidents have often faced difficulties. Marcin Korolec, presiding at the Cop in Warsaw in 2013, lost his job as environment minister in a cabinet reshuffle while the conference was under way. He retained his role as Cop president, but delegates said his authority was diminished.

Tuesday evening’s session in Chile’s Congress closed with an official request from lawmakers for the government to sign the Escazú Agreement, a Latin American alliance that guarantees access to information and protection of environmental defenders, and which Piñera’s administration has refused to join.

The director of the Chilean thinktank Espacio Público, Andrea Sanhueza, told CHN: “There is an important contradiction between the discourse and the practice of the Chilean government. They say they wanted a COP of the people, but at the same time they refuse to sign Escazú, the most important agreement on climate justice and environmental democracy that we have”.

“Die from fighting, not from cancer”, a protester shouted while being removed by police from the Congress’ gallery as Schmidt asked for “forgiveness in the name of Chile” for the harm suffered by thousands of families who live near coal power plants.

Schmidt also accounted for Chile’s new climate plan that was to be announced at COP but was delayed following the outbreak of mass protests against the government.

The draft plan considers reforesting 130,000 hectares with pines and eucalyptus trees to mitigate climate change despite the fact that these plantations, once harvested, could release the emissions captured back into the atmosphere.

“Here there are no good or bad, if we do not work together we will not make progress. Which is what we are doing, making progress based on science”, said Schmidt.