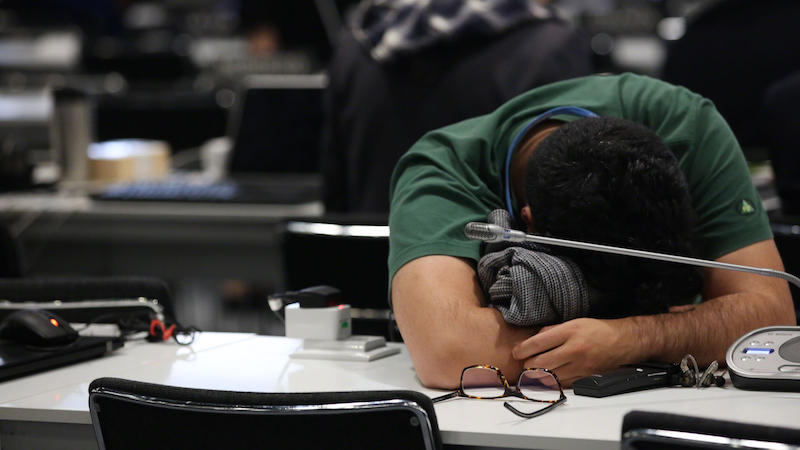 Negotiators worked for two weeks at a frenetic, round the clock pace throughout Cop25 (Photo: IISD/ENB - Kiara Worth)

MADRID – The rift between a growing climate vanguard and a handful of countries obstructing progress meant countries failed to finalise the rules of the Paris Agreement at talks that finished on Sunday.

The UN’s longest-ever climate summit drew to a close after two additional days and nights of difficult negotiations.

Ministers and diplomats in Madrid were under pressure to agree common rules to set up a global carbon market and signal their readiness to boost climate action ahead of a key summit in Glasgow, UK, next year.

But a failure to reach consensus on key issues weakened the final decision on ambition and pushed back a decision on carbon markets into next year.

The Chilean presidency wanted to use Cop25 (the UN’s 25th conference of the parties) to galvanise political leadership but it failed to leverage the biggest emitters into action.

Invigorated by the US withdrawal and rising nationalism at home, Brazil, Australia and Saudi Arabia, defended loopholes and opposed commitments to enhance climate action. Other big emitters such as China and India insisted on the delivery of finance and support promised by rich countries before 2020 as a precondition to any discussion on enhancing their current targets.

Meanwhile, some European countries, emboldened by the demands of public and youth activists, joined a call by vulnerable countries to push for strong rules that would ensure the integrity of the Paris Agreement.

Closing the meeting, Cop25 president Carolina Schmidt said the agreements reached were “not enough to address the urgency of the crisis on climate change”.

“The world is watching us,” she warned, calling on countries to “strengthen political will and to accelerate climate action at the pace that the world needs”.

”The new generations are waiting for more from us, we have the obligation of being up to this task,” she added.

I am disappointed with the results of #COP25.

The international community lost an important opportunity to show increased ambition on mitigation, adaptation & finance to tackle the climate crisis.

Throughout the talks, a coalition of countries, led by the Marshall Islands and supported by vulnerable countries and the European Commission, called on governments to leave Madrid with a clear call to enhance ambition in Glasgow in 2020.

As part of its green deal for Europe, the commission said it would to present a plan to enhance the bloc’s 2030 target to at least 55% by summer 2020. All member states but Poland also committed to achieve carbon neutrality by 2050.

Under the Paris agreement, countries have to revisit their climate plans by 2020 but most are not compelled to enhance them. But scientists and many citizens are calling for governments to act now, so next year is being viewed as a critical moment in holding warming at least below 2C. 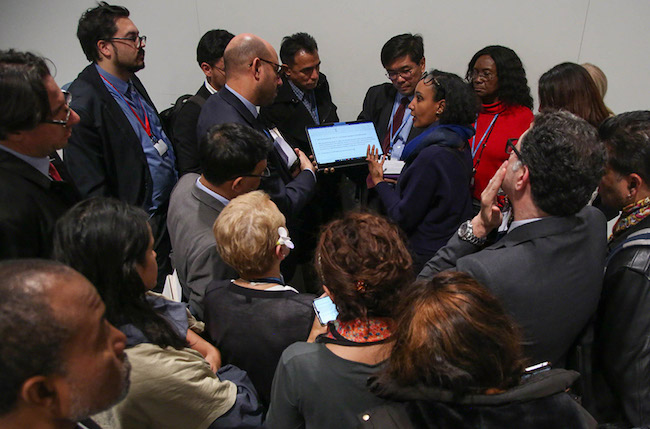 Negotiators huddle, trying to find a deal hours after the conference should have finished (Photo: IISD/ENB – Kiara Worth)

But at the insistence of the US, Brazil and China, the final decision text was weak: recalling countries’ commitment under the Paris Agreement to “communicate or update” their climate plans by 2020. In doing so, the family of nations urged countries to consider the gap between existing commitments and what is needed to limit warming “well below 2C,” with a view to “reflecting their highest possible ambition”.

On carbon markets, another progressive alliance of 31 countries led by Costa Rica and including large European economies called for strong rules to ensure the integrity of the global carbon trading system. No deal was better than a bad deal, they warned.

Australia and Brazil carbon credits will put 1.5C out of reach, 31 countries say

But again, entrenched positions on loopholes allowing old Kyoto credits to be traded on the new market – a position favoured by Australia and Brazil – could not be reconciled.

Tensions peaked on Saturday night when some vulnerable and developing countries were excluded from back room discussions on the issue.

Brazil’s push for an accountability cheat permitting the double counting of emissions reduction was also irreconcilable with a majority of countries’ views.

Countries were “so very close” to achieve an agreement on carbon markets, Schmidt told the closing plenary, expressing her disappointment the issue would have to be addressed again at Cop26 in Glasgow.

Further push back from rich countries on commitments to provide long-term finance to the most vulnerable further crystallised the tension between the needs of developing countries to scale-up global efforts to address climate change and the rebuke of a few major economies. 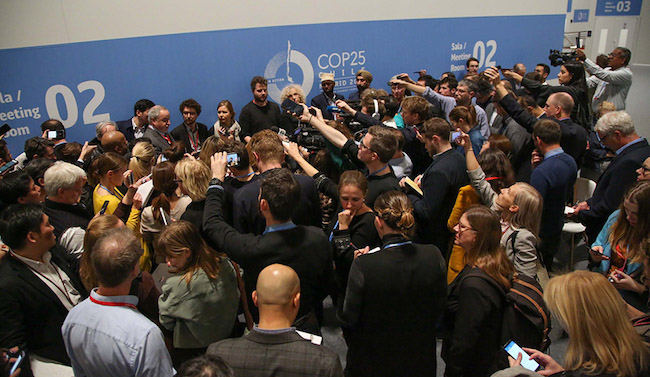 On Saturday, climate NGOs held a press conference denouncing a set of drafts they saw as inadequate (Photo: IISD/ENB – Kiara Worth)

One Latin American diplomat told CHN vulnerable countries were less ready to scale down their demands in the name of compromise given the reality of climate impacts at home and people demanding their governments act accordingly. “There is less flexibility,” she said.

Through the talks, youth activists and campaigners highlighted the disconnect between the negotiations and the demands of people protesting for climate action around the world.  “I have never seen the divide between what is happening between the inside of these walls and the outside so large,” said Jennifer Morgan, executive director of Greenpeace.

Felipe De Leon, a climate negotiator for Costa Rica, told CHN those obstructing the process were becoming “fewer and fewer and increasingly isolated”. He hoped young people would continue to push the process forward.

That public pressure for stronger action – along with a huge diplomatic push – will be key for countries to hike their climate plans at next year’s climate talks in Glasgow. The UK’s climate negotiator Archie Young said countries had told the incoming UK presidency of their intentions to build on Chile’s efforts “and on those calling on us to go further, faster”.

“We must take people with us as we all raise our ambition in the year ahead,” he said.