The EU releases its Green Deal. Here are the key points

Europe’s bid to reach carbon neutrality by 2050 will aim for a just, rapid shift away from high polluting industries and technologies 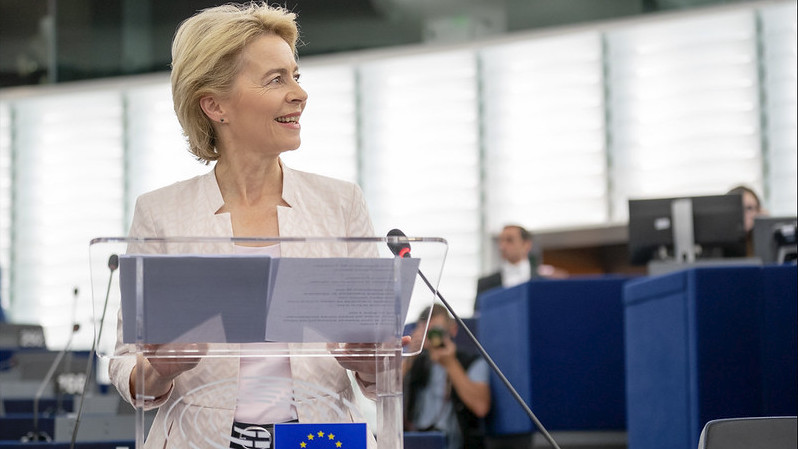 European Commission president Ursula von der Leyen outlined the European Green Deal on Wednesday, vowing to “leave no-one behind” in the race to achieve a climate neutral economy by 2050.

“This is Europe’s man on the moon moment,” she said in a video statement. “Our goal is to reconcile the economy with our planet” and “to make it work for our people,” she added, describing climate policy as Europe’s new growth strategy.

Europe wants to be a front-runner in climate friendly industries and clean technologies, the former German defence minister explained, adding: “I am convinced that the old growth model based on fossil fuels and pollution is out of date and out of touch with our planet”.

Here are the 10 main points in the commission plan:

1. ‘Climate neutral’ Europe. This is the overarching objective of the European Green Deal. The EU will aim to reach net-zero greenhouse gas emissions by 2050, a goal that will be enshrined in a ‘climate law’ to be presented in March 2020.

That means updating the EU’s climate ambition for 2030, with a 50-55% cut in greenhouse gas emissions to replace the current 40% objective. The 55% figure will be subject to a cost-benefit analysis.

The commission wants to leave no stone unturned and plans to review every EU law and regulation in order to align them with the new climate goals. This will start with the Renewable Energy Directive and the Energy Efficiency Directive, but also the Emissions Trading Directive and the Effort Sharing Regulation, as well as the infamous LULUCF directive dealing with land use change. Proposals there will be submitted as part of a package in March 2021.

A plan for “smart sector integration”, bringing together the electricity, gas and heating sectors closer together “in one system”, will be presented in 2020. This will come with a new initiative to harness “the enormous potential” of offshore wind, officials said.

2. Circular economy. A new circular economy action plan will be tabled in March 2020, as part of a broader EU industrial strategy. It will include a sustainable product policy with “prescriptions on how we make things” in order to use less materials, and ensure products can be reused and recycled.

Carbon-intensive industries like steel, cement and textiles, will also focus the attention under the new circular economy plan. One key objective is to prepare for “clean steelmaking” using hydrogen by 2030, an EU official said. “Why 2030? Because if you want clean industry in 2050, 2030 is the last investment cycle,” he said.

New legislation will also be presented in 2020 to make batteries reusable and recyclable.

3. Building renovation. This is meant to be one of the flagship programmes of the Green Deal. The key objective there is to “at least double or even triple” the renovation rate of buildings, which currently stands at around 1%.

4. Zero-pollution. Whether in air, soil or water, the objective is to reach a “pollution-free environment” by 2050. New initiatives there include a chemical strategy for a “toxic-free environment”.

5. Ecosystems & biodiversity. A new biodiversity strategy will be presented in March 2020, in the run-up to a UN biodiversity summit taking place in China in October. “Europe wants to lead by example” with new measures to address the main drivers of biodiversity loss, an EU official said. That includes measures to tackle soil and water pollution as well as a new forest strategy. “We need more trees in Europe,” the official said, both in cities and in the countryside. New labelling rules will be tabled to promote deforestation-free agricultural products.

6. Farm to fork strategy. To be tabled in Spring 2020, the new strategy will aim for a “green and healthier agriculture” system. This includes plans to “significantly reduce the use of chemical pesticides, fertilisers and antibiotics,” an EU official said. New national strategic plans due to be submitted next year by member states under the Common Agricultural Policy will be scrutinised to see whether they are aligned with the objectives of the Green Deal.

7. Transport. One year after the EU agreed new CO2 emission standards for cars, the automotive sector is once again in the commission’s firing line. The current objective is to reach 95gCO2/km by 2021. Now, “we need to work towards zero,” sometime in the 2030s an EU official said.

Electric vehicles will be further encouraged with an objective of deploying 1 million public charging points across Europe by 2025. “Every family in Europe needs to be able to drive their electric car without having to worry about the next charging station,” the official explained.

“Sustainable alternative fuels” – biofuels and hydrogen – will be promoted in aviation, shipping and heavy duty road transport where electrification is currently not possible.

8. Money. To “leave no-one behind,” the commission proposes a ‘Just Transition Mechanism’ to help regions most heavily dependent on fossil fuels. “We have the ambition to mobilise €100 billion precisely targeted to the most vulnerable regions and sectors,” said von der Leyen as she presented the Green Deal on Wednesday.

Every euro spent from the fund could be complemented by 2 or 3 euros coming from the region. EU’s state aid guidelines will be reviewed in that context so that national governments are able to directly support investments in clean energy, with blessing from the commission’s powerful competition directorate.

Regions will also be offered technical assistance in order to help them “absorb” the funds while respecting the EU’s strict spending rules.

However, any state aid would have to be vetted by the commission as part of new regional transition plans submitted beforehand to Brussels.

9. R&D and innovation. With a proposed budget of €100bn over the next seven years (2021-2027), the Horizon Europe research and innovation programme will also contribute to the Green Deal. 35% of the EU’s research funding will be set aside for climate-friendly technologies under an agreement struck earlier this year. And a series of EU research “moonshots” will focus chiefly on environmental objectives.

10. External relations. Finally, EU diplomatic efforts will be mobilised in support of the Green Deal. One measure likely to attract attention – and controversy – is a proposal for a carbon border tax. As Europe increases its climate ambitions, “we expect the rest of the world to play its role too,” an EU official explained. But if not, Europe is “not going to be naïve,” and will protect its industry against unfair competition, he added.

To lead by example, the EU commission itself will aim for climate neutrality by 2030. “That’s a bold objective, but after all we don’t make steel so we might have an easier job,” the official said.

This piece was originally published on EURACTIV