Cop25 Bulletin: ‘We have achieved nothing’ 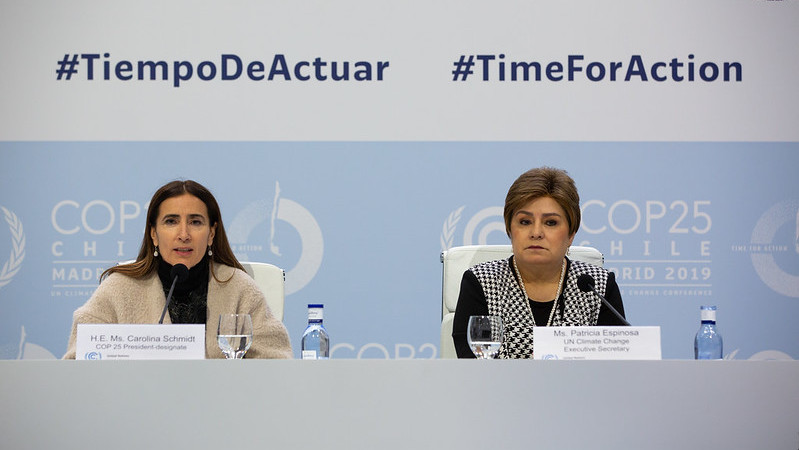 Yet again, Greta Thunberg and the Fridays For Future youth movement showed their power to consistently mobilise ten of thousands of people.

But as she spoke to reporters in Madrid, Thunberg questioned whether a year that has spawned one of the great social movements of the century has really made any difference.

“If you look at it from a certain point of view, we have achieved nothing,” was her frank assessment.

“We have been struggling,” admitted UN climate chief Patricia Espinosa.

The UN halls halfway through a climate talks is a pretty good place to go to feel like nothing is being achieved. It’s the moment when diplomats have exhausted their mandates and look searchingly to the arrival of their ministers next week to break the deadlock.

Chloé Farand reports on the paradox of a climate talks with little mandate to deliver cuts to carbon emissions – and what happens when the youth arrive.

*** From We Mean Business: Why the work of the Marrakech Partnership is vital beyond 2020

The Marrakech Partnership for Global Climate Action, was created to enhance collaboration between governments and cities, regions, businesses and investors and give greater visibility and momentum to climate action efforts. Its mandate is due to expire at the end of 2020, but the need for collaboration between all actors, to ensure we meet the goals of the Paris Agreement, is more urgent than ever before. Read more > ***

Also at Cop25… With pressure on countries to do more than just negotiate rules, Chile and Spain had hoped this meeting would bring together a group of countries willing to step forward and raise their climate targets.

Cop25 presidency Chile had planned to lead by example by announcing its new ‘nationally determined contribution’ during the talks. But on Friday, a government official told CHN that plan had been delayed, probably until next year.

As negotiations on “common time frames” drew to a close Friday, countries failed to reach even remote agreement on how long future climate pledges should last. A draft conclusion showed eight separate options as still on the table, ranging from five years to ten years and various mixes of both.

The issue is one of the last remaining pieces of the Paris “rulebook” to be agreed. (We explain why it matters here). The issue is now unlikely to be resolved at this year’s talks.

Little time was given in the official agenda for countries to make progress on the issue, according to Yamide Dagnet from the World Resources Institute.

“What’s the point of waiting five years to make a decision about a five year cycle at a time of climate emergency?”

Australia was one of the countries arguing to push the common timeframe talks out as far as 2023. But that’s not their priority at Cop25, writes Richie Merzian from the Australia Institute. What they really want, he says, is for other governments to ignore the fact they are the only country planning to use credits carried over from the Kyoto Protocol to meet it Paris Agreement goals.

High Level Panel for a Sustainable Ocean Economy: published a paper Friday showing how climate change is set to devastate regional fisheries and cause reef tourism revenue losses of over 90%.

The UN agenda for Saturday is here.

*** Want to talk to all of Cop25 but can’t get hold of Patricia Espinosa’s microphone? Get your message out in CHN’s renowned daily newsletter. Contact James Ramsey.***

Denmark’s parliament adopted a new climate law on Friday with some bold targets. The law legally commits it to reaching cutting emissions 70% below 1990 levels by 2030, achieving net zero emissions by 2050 and delivering climate action on the international stage – including climate finance. (Our report here).

The law sets a “clear direction” for Denmark’s green transition in the future, said Mattias Söderberg, a campaigner at DanChurchAid. “The climate law also sends an important signal to the rest of the world that Denmark is stepping-up its efforts to stop climate change before it is too late,” he said.