No consensus could be found on whether new climate pledges should last five years, ten years or a mix of both as countries meet at UN talks in Madrid 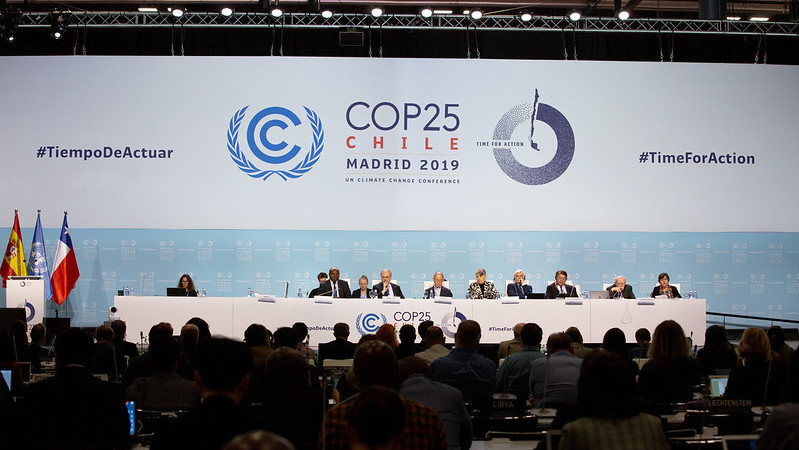 The plenary of the Cop25 UN climate talks (Photo: UNFCCC)

By Jocelyn Timperley and Chloé Farand

Countries have failed to reach agreement on the time period future climate pledges should cover at UN talks in Madrid.

Pledges under the Paris Agreement are supposed to be aligned for all countries starting from 2031. But draft conclusions released at the Cop25 talks on Friday showed that no agreement was found on the length of the windows, with a wide range of options remaining on the table, including five years, ten years or various ways of mixing both.

The failure to move forward means the issue is unlikely to be resolved at these talks, which conclude next week.

Countries appeared to view the matter as a low priority. In particular, the EU saw little need to reach agreement at this session and took no clear position on which option they back.

“In our view, time frames that are compatible with the Paris agreement are five years or ten years, or a combination of both,” an EU negotiator told Climate Home News.”We have not expressed preferences for any of these three options for the time being.”

Earlier this week, Greenpeace’s Li Shuo predicted no solution would be reached in Madrid without a clear move by the EU to clarify their position.

The delay in deciding on common time frames was a “missed opportunity”, according to Yamide Dagnet from the World Resources Institute, adding that she doesn’t understand why an already overdue decision was delayed again.

“Countries could not event agree on a text to text to the ministers,” she says. “Even if there were political tensions, it should have been a simple decision.”

Parties also failed to agree on the deadline for when a final decision should be made.

EU, Canada and Australia said agreement should be reached by 2023 at the latest, although it could be made earlier. Saudi Arabia supported suspending negotiations on the topic until 2023, while the US said they should be suspended until 2022.

‘Common timeframes’: How they could speed or slow climate action

With the negotiations running out of designated time, and no extra time given to try to reach consensus, China invoked a delay clause which pushes the discussion to the next climate talks in June next year. Official approval of this outcome could occur at a closing plenary set to take place on Monday, although further discussion could happen at this plenary.

But other countries said a decision should have been made at this session, including the small island state, least developed country and Latin American country groupings as well as Indonesia.

Chile, which holds the presidency of the conference, had hoped to drive an outcome on the so-called common time frames issue. However, diplomatic focus has instead largely been put on reaching consensus on rules for an international carbon market.

Those talks have also made slow progress during the meeting’s first week, with new drafts of negotiating text delayed as negotiators stuck to their positions.