Cop25 Bulletin: ‘Thank you for being insane’

Sign up to receive this bulletin in your inbox each morning of these critical talks – plus you’ll get Climate Weekly… every week of the year! 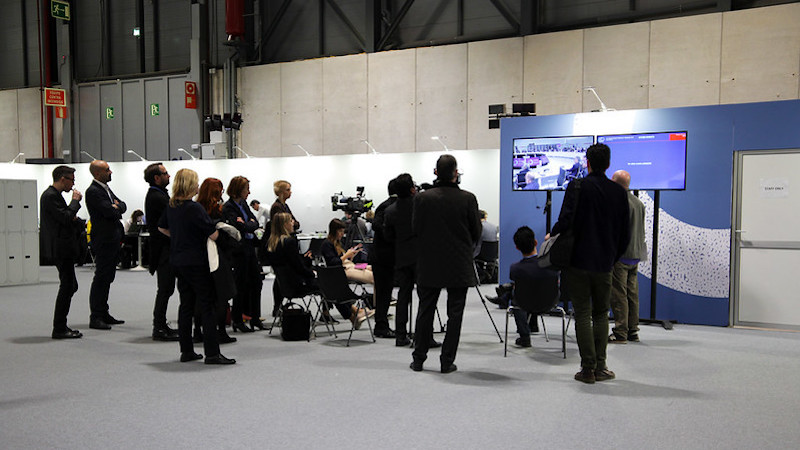 As Greta Thunberg’s yacht lands in Lisbon and climate diplomats scrap over arcana in Madrid, there is a sense of two worlds about to collide at Cop25.

Talk to young people, or any of the new, emboldened breed of climate activists inspired by the young Swede and there is an expectation these UN talks must be the moment we turn the tide on climate change.

That is a long way from the reality of climate diplomats, who know all too well the limitations of the process they inhabit (see below for news of how they are faring). Even with an extra push for countries to raise their climate targets in Madrid, a decisive Cop25 is a fantasy.

Along with rising political pressure there is now open talk of the UN climate process collapsing under the weight of expectations. Writing on Wednesday, E3G’s Tom Burke argues there are no better options and failure of the UNFCCC would lead to a general regression.

“Climate diplomacy happens in capitals not negotiating rooms,” he says, calling for a different focus.

But with Thunberg rumoured to be arriving in Madrid in time for a planned Friday protest, the pressure only grows.

*** From We Mean Business. Going 100% renewable: how companies are demanding a faster market response

The 2019 RE100 Progress and Insights Annual Report, from international non-profit The Climate Group in partnership with CDP, tracks the progress of more than 200 RE100 member companies toward their 100% renewable electricity targets. The good news is more than 30 RE100 member companies have already reached 100% renewable electricity and one in three members are now at over 75%.***

At a meeting of heads of delegations on Tuesday, countries said they wanted to find common ground on carbon markets, or Article 6. Paul Watkinson, chair of UN Climate Change’s scientific body, said “everybody was ready to work towards an agreed outcome here in Madrid”.

Brazil, which has previously dug its heels in on this issue, said it was “very much committed to a successful and balanced outcome,” adding “you can count on this delegation to meet these objectives”.

But do temper any optimism. “Thank you for being insane enough to take this on again,” a South African negotiator told the co-facilitators leading the meeting – a hint of the difficulties lying ahead.

Disagreements on some of the sticking points were clear.

Outside Article 6… The other unfinished aspect of the Paris rules is the alignment of national climate pledges – known in the UNFCCC as ‘common timeframes’. Talks on this item begin on Wednesday, with draft text expected on Friday. There are fears that longer time frames could lead to slower emissions cuts. Why? Read our explainer.

Meanwhile, a new report launched in Madrid by the World Meteorological Organisation (WMO) found that average temperatures for the last decade were “almost certain to be the highest on record”.  2019 is also on course to be the second or third warmest year on record with global temperature average of 1.1C above the pre-industrial period.

“This all shows… things haven’t been improving according to the Paris Agreement,” said WMO secretary general Petteri Taalas.

Influence watchers raised concerns over the Spanish government’s appeal for corporate aid to pull off this last-minute conference. Among those companies are Iberdrola and Endesa, both power utilities with interests in fossil fuels and large carbon footprints.

“If these meetings are meant to pave the way for real solutions, not industry schemes, and meaningfully address this crisis, surely we can agree they mustn’t be bankrolled and influenced by those most responsible for it,” said campaigners from Observatorio de Multinacionales en América Latina, Corporate Europe Observatory and Corporate Accountability International.

Reflecting the theme of this “Blue Cop”, Chile launched an initiative to promote “solutions for the ocean”. The initiative aims to bridge the gap between scientific evidence and public policy to include oceans in climate strategies and better protect them from climate impacts.

Outside Cop… Yesterday, the Spanish parliament reconvened for the first time since last month’s election, which failed to resolve the country’s political deadlock. Negotiations to form a government are underway, with a preliminary deal between the socialists and Podemos already made, but a resolution is not yet in sight.

Besides the politics, on Monday evening, the Spanish King Felipe VI hosted a reception at the royal palace for heads of states and government representatives attending Cop25. (Some pics here and here). The king called on countries to show “leadership” and “determination” in taking climate action. “No border can protect us from the effects of climate change, we cannot delay these decisions,” he said.

What to watch on Wednesday: The latest Global Carbon Budget report is due to be published today. The report is a snapshot of the carbon emissions trend and the biggest emitters.

A first draft of the carbon markets Article 6 text is expected by the end of today. Catch-up with our explainer here.

Science ministers are due to kick off one of four ministerial meetings happening throughout the talks. One of the meeting objectives is to “receive specific voluntary commitments on climate action”. Could be one to watch as part of the broader effort to raise ambition.

The European Environment Agency is also publishing its state of the environment survey.