Sign up to receive this bulletin in your inbox each morning of these critical talks – plus you’ll get Climate Weekly… every week of the year! 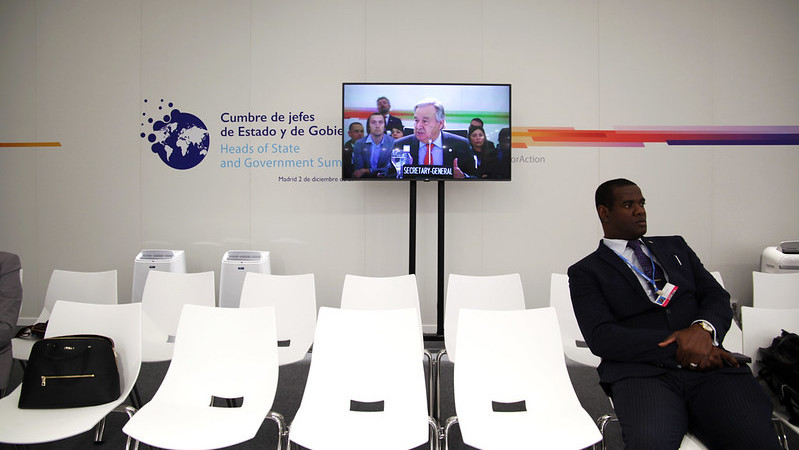 The Cop25 climate talks kicked off on Monday in Madrid, Spain (Photo: UNFCCC)

In September, Hurricane Dorian demolished one in every two homes on the main island of the Bahamas and killed more than 60 people.

This week, as the Caribbean hurricane season ended, reports from the archipelago found a nation living in tents, with tainted water and deep frustration.

The damage caused by Dorian has been estimated at $3.4 billion – a quarter of Bahamian GDP. Meanwhile payouts from the Caribbean’s disaster insurance scheme totalled just $12.8 million.

This topic, known as loss and damage, rarely gets a place in the spotlight at UN climate talks. But Cop25 will receive a review of the current system. We take a look at what vulnerable countries hope the talks will deliver.

Meanwhile, a Bangladeshi academic calls on the European Union to make the link between declaring a climate emergency and compensation for victims.

What to watch today: The chair of the talks’ scientific body Paul Watkinson said he would kick off negotiations on carbon markets, known as Article 6, with an informal meetings of heads of delegations on Tuesday, to better understand countries’ views.

Talks are expected to be tough. “We need to do a lot because we know that the situation is serious,” he said. Our explainer is here.

Also on Tuesday, the World Health Organisation is due to publish its findings on tracking global progress on health and climate change. World Meteorological Organisation also due to present its state of the world climate report.

Also at Cop25: Yesterday, at the opening of the talks, UN secretary general António Guterres expressed his “deep gratitude” to Spain for organising the summit “in record time”, which he described as no less than a “miracle”.

“This summit should have the capacity to give a very strong boost to climate action,” he said and called on “every government to say that their commitments taken in Paris will be firmly increased.”

This push for ambition was seconded by European Climate Foundation CEO Laurence Tubiana: “What we need as a success for that Cop is only one thing: a big number of countries saying yes next year we will be there with new commitments for 2030 and mid century strategy that are consistent with the Paris Agreement.” (In case you missed it, our report on this emerging side of the talks is here).

Negotiations got off to a contentious start on Monday when African nations demanded the meeting consider giving the continent “special circumstances” – conferring preferential access to funding and capacity building.

The Paris Agreement recognises the special circumstances of least developed countries and small island states. There are 20 African nations outside these groups, including larger economies such as Egypt, South Africa, Nigeria and Morocco. This has been a running issue since 2015.

Cop25 president Carolina Schmidt said an “informal consultation” will be held on the issue during the talks. She “urged” countries to “recognise” Africa’s special circumstances, cracking open a diplomatic can of worms.

In scenes reminiscent of 2017, a US congressional delegation led by speaker of the House of Representatives Nancy Pelosi, is at Cop25. “We came here to say ‘we’re still in’”, said Pelosi on Monday.

The slogan was championed by a coalition of progressive politicians, governors, cities and businesses after Donald Trump announced his intention to withdraw from the Paris Agreement. Less than a month ago, the White House started the formal process of pulling out.

Meanwhile the CEOs of 75 top US companies and the AFL-CIO union – which represents 12.5 million workers – issued a joint statement calling for the US to remain in the Paris agreement.

It was the first day of the new EU commission’s term in office, but in a show of European force commission president Ursula von der Leyen, EU council president Charles Michel and EU parliament president David Sassoli all made the trip to Madrid to attend the opening of the Cop. Meanwhile we published this excellent in-depth look by EURACTIV at the continent’s sweeping legislation to reach net-zero and the politics that may just see it become law.