The talks will take place in Spain’s capital, the UN confirmed, after Chile pulled out amid social unrest 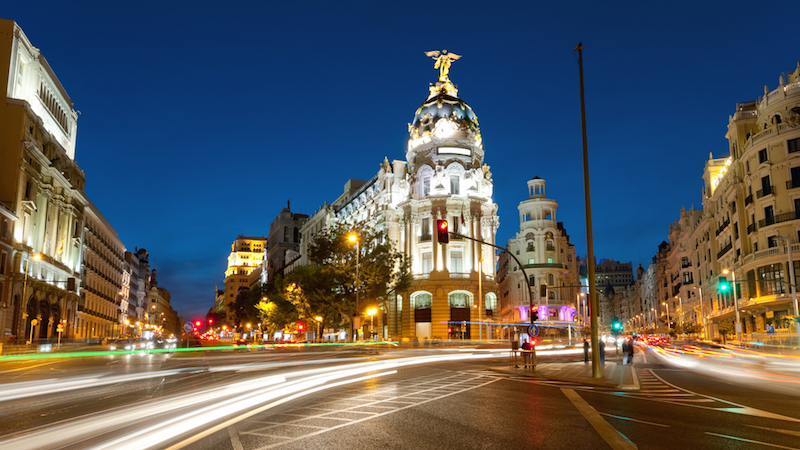 Crossing Alcala and Gran Via street in Madrid by night

Madrid will host the Cop25 UN climate talks, stepping in after Chile withdrew amid social unrest.

The Spanish government offered to hold the UN’s annual circus of thousands of diplomats, politicians, campaigners, journalists and business leaders in its capital on Thursday, following Chile’s announcement it could no longer be the venue.

The Polish Cop24 president Michal Kurtyka announced the news on Twitter on Friday. Chile’s environment minister Carolina Schmidt, who will remain Cop25 president despite the change of venue, said UN Climate Change had confirmed the news.

The decision to change venues ultimately lay with the UN Cop bureau, a 12-member panel of climate diplomats drawn from across the world and chaired by Kurtyka. They met on Friday and accepted Spain’s offer.

In a statement, UN Climate Change executive secretary Patricia Espinosa said the Cop bureau had agreed to hold Cop25 in Madrid from 2 to 13 December.

Spain’s socialist prime minister Pedro Sánchez made the offer to his Chilean counterpart Sebastian Piñera, who gratefully accepted on Thursday.

Teresa Ribera, Spain’s ecological transition minister, describing hosting the UN climate talks in Madrid as “a pleasure” and  “a privilege” and “honour” to facilitate global action on climate change. “Progressive & constructive multilateralism is the best answer to global challenges,” she tweeted.

Hosting the event with just four weeks to prepare will be a huge task. The UN and the Spanish government did not immediately provide information on the size of the conference. The talks often swell to more than 20,000 delegates.

The German government, which hosts the UN climate headquarters in Bonn and is the default fall back for climate talks, said on Thursday: “In Bonn, this would not have been logistically possible in such a short time.”

Spain faces the complicating factor of an election on November 10. At a campaign event, Pablo Casado Blanco, who leads Spain’s largest opposition group the conservative People’s Party, said the environment was not an issue of the left and that his party would host the Cop if they won government.

“In this fight we go together,” said Blanco.

With the talks now being held in Spain, six out of eight Cops will have been held in Europe between 2013 and 2020. Tosi Mpanu Mpanu a senior negotiator for the Democratic Republic of Congo, told Climate Home News that given the circumstances “having a country volunteer in such a short time is something that must be welcomed by the whole community of negotiators”.

However, he warned that delegates from African and Asian countries, almost all of whom will have to apply for visas to Europe, must not be disadvantaged by immigration issues.

A Spanish foreign ministry spokesperson said the government could not answer questions about how its consulates will process thousands of visa requests in the coming weeks. A coordination meeting in the ministry next week is expected to establish a process.

Paul Watkinson, the chair of UN Climate Change’s scientific body, said Spain “deserves enormous thanks for stepping in to ensure Cop25 can go ahead on the planned dates”.

“There is a lot to be done on the logistical front, but we can get back to concentrating on the substance,” he said.

Diplomats hope the talks can resolve a stalemate over how carbon credits can be traded between countries. This has proved a politically contentious matter, with Brazil pushing a solution that other countries fear would undermine the 2015 Paris Agreement by flooding the system with credits that don’t result in emissions cuts.

Talks on this issue have been fractious and were left unresolved last year when all nations agreed to rules that govern the Paris deal. A preliminary meeting in Costa Rica last month remained deadlocked.

Swedish activist Greta Thunberg, who sailed across the Atlantic to attend Cop25 in Chile, said she will “need some help” to make the crossing back towards Europe over the next few weeks.

“It turns out I’ve travelled half around the world, the wrong way,” she tweeted.