Cristiana Pașca Palmer resigned before key summit, she faced allegations of discrimination against African staff and intervention in the renewal of her contract 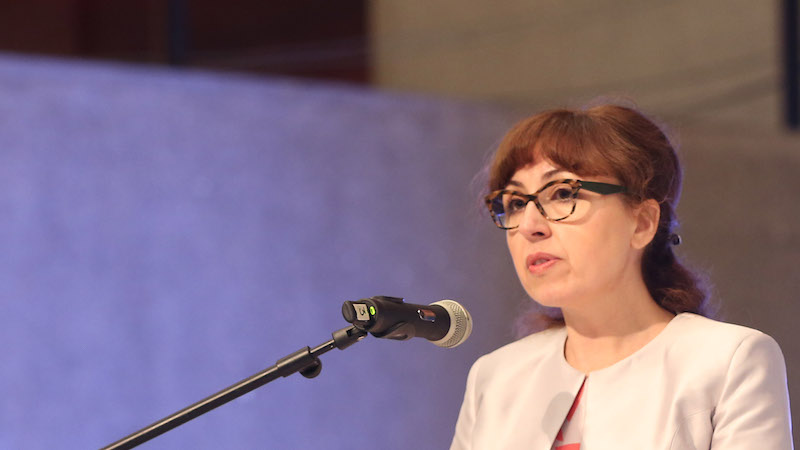 The UN’s biodiversity chief has resigned in the midst of preparations for the most important summit on the Earth’s living systems in a decade.

Earlier this month, Cristiana Pașca Palmer, a former Romanian environment minister, told staff at the secretariat of the Convention on Biological Diversity (CBD), where she has been executive secretary since March 2017, she was “at a crossroads where I must accept that due to a mixture of factors increasingly affecting my health, I am unable to continue this journey and lead the CBD Secretariat on the road to the UN Biodiversity Conference in China”.

Documents seen by Climate Home News describe a chaotic work environment at the secretariat, widespread staff illness and resignations and allegations that Pașca Palmer discriminated against African staff members on the basis of their race.

They also show she had fallen into conflict with the bureau that represents national governments that have signed the convention. This culminated in a top Egyptian official and former executive secretary accusing her of improperly intervening in deliberations over the renewal of her contract.

Pașca Palmer declined to be interviewed for this article or respond to the allegations, repeating that she was taking time off to be with family and recover from health problems.

The upheaval at the secretariat comes at a critical moment. Scientists warn more than one million species face extinction, many within decades. At the CBD’s 15th major conference (Cop15) in October 2020, countries will try to agree new targets and processes for the protection of biodiversity over the next ten years.

These will replace the 2011-2020 goals, brokered in Aichi, Japan, which have almost universally failed to draw a response from governments. Observers are calling it the “last chance” to avert total breakdown of the natural world. It is also hoped the 2020 meeting will bolster the use of nature’s own solutions to slow the rate of global warming.

The role of the secretariat and the executive secretary is vital in assisting national governments to find agreements during complex negotiations.

UN executive secretaries often become global spokespeople for their remit. This was an element of Pașca Palmer’s job in which observers say she was highly effective, raising the profile of the convention through media interviews and meetings with political leaders around the world.

In her resignation announcement to staff, she said “biodiversity and nature are increasingly regaining their central role as a critical emergency”, noting “growing and unprecedented support from many heads of state and governments”.

Climate news in your inbox? Sign up to CHN’s newsletter

But as her advocacy and punishing travel schedule gained traction, Pașca Palmer’s relationship with the Cop bureau – a body of 14 officials elected to represent the convention’s member states – became strained.

A major source of tension was Pașca Palmer’s reaction to an article published in the Namibian, that country’s largest daily newspaper, on 29 August.

The Namibian reported that African members of the bureau were concerned with Pașca Palmer’s management and reports of discrimination from within the secretariat. A document, allegedly prepared by the officials, said “Africa supports no extension of the term of the executive secretary” when her contract expires in March 2020.

In an email to the bureau and the Egyptian Cop presidency in the week following the story’s publication, Pașca Palmer called the document “derogatory” and asked for help investigating whether African members had “any association with the article” and whether the document represented a “unanimous view from the African region”. She said she had spoken to African representatives who were not aware of the document and asked the bureau to issue a disclaimer.

It was an overstep. In an indignant email a week later, Hamdallah Zedan, a representative of the Egyptian Cop presidency and himself a former executive secretary of the CBD, said her request and questioning of Zedan and African officials “shockingly interferes in and undermines an intergovernmental process and entity” and was done with “unbelievable audacity”.

His email was sent to members of the bureau and Pașca Palmer’s direct boss UN Environment executive secretary Inger Andersen.

“Ms. Pasca-Palmer [sic] is asking, in the name of transparency, the bureau to take a favourable position or at least to quickly make its position clear about her request for an extension of her contract. This is inappropriate and unacceptable,” Zedan concluded and asked Andersen to take “appropriate measures”.

A month later, Andersen wrote to member states to announce “with regret” Pașca Palmer was leaving the CBD. Neither the UN nor Pașca Palmer would comment on whether these events were linked.

Reporting like this costs us… Climate Home News is an independent news outlet dedicated to the most important global stories. If you can spare even a few dollars each month, it would make a huge difference to us. Our Patreon account is a safe and easy way to support our work.

While her behaviour breached norms around the traditional subservience of the executive secretary to member states, Pașca Palmer’s complaint that the note did not represent a whole-of-Africa position were backed up by CHN’s own investigation.

Several African national representatives – not part of the bureau – were not aware of the document’s existence when contacted by CHN. This leaves open the possibility the note was fake, or prepared by African members of the bureau without consultation with other African officials.

Melesse Maryo, Ethiopia’s top CBD representative and a member of the bureau, would not confirm or deny the document’s authenticity. He told CHN it was not “the Africans’ views” that caused Pașca Palmer to resign.

“The issue is not important for [Africa]. Things have been met already because of some other reasons. Because she got sick physically and she resigned,” he said.

Alongside the souring of relations with member states, staff at the CBD secretariat in Montreal, Canada had become increasingly demoralised, according to preliminary findings by auditors from the UN’s Office of International Oversight Services (OIOS), leaked to CHN.

The national governments who are members of the convention requested the audit, which is a routine practice for UN bodies. The final report, which the UN said was being “finalised”, would have allowed Pașca Palmer to respond to the findings. It is not yet public.

In interviews, staff told auditors there had been a breakdown in trust with management and Pașca Palmer’s busy travel schedule made her unavailable. This made the secretariat a “conflictual and stressful” place to work.

Between the start of 2017 and the middle of this year, 22 “senior and experienced staff” left the secretariat – one fifth of the total personnel – seven of them in the first half of 2019.

Coupled with a lag in recruitment, the high absence rate and staff turnover raised concerns with the OIOS auditors that the secretariat may not be functioning at its best.

Alongside a general breakdown in staff morale, certain staff members felt they were being singled out by Pașca Palmer, some because of the colour of their skin.

The issue of prejudice was raised in two complaints, which CHN has seen, lodged by senior staff members with the OIOS in May and June this year.

Both accused Pașca Palmer of trying to push them out of the secretariat. One complainant alleged Pașca-Palmer had discriminated against her because she is black. The long-standing UN employee said she observed this happening to other colleagues and listed several staff from Africa or the Caribbean who had left their jobs or been frozen out by Pasça Palmer.

The complaint concluded: “I sincerely believe that Ms Pasca-Palmer [sic] is a racist. She has a negative attitude to Africans and people of African origin.”

CHN has seen no direct evidence of discrimination or racial prejudice by Pașca Palmer. But it is clear some black staff members felt they were working in an environment in which race determined how they were treated.

In an email to ten “African and Diasporan colleagues”, which CHN has seen, a staff member announced her resignation from the secretariat.

A colleague responded that it was “sad that we are being treated so unfairly and with zero respect for diversity”.

The second complainant to the OIOS – who is white – noted “acts of discrimination against colleagues in the [secretariat] from African nations of African heritage”.

That complainant alleged Pașca Palmer had attempted to force her out of the secretariat after discovering she had cooperated with a UN Office of Human Resources Management investigation into Pașca Palmer’s decision to scrap a division of the CBD devoted to helping governments include biodiversity protection in their policies and planning.

“As a long time international civil servant, I have never experienced anything that remotely resembles to [sic] this traumatic, demeaning and degrading experience,” she wrote.

It is unclear if these complaints were a factor in Pașca Palmer’s resignation. Race-based discrimination was an issue recognised in the African bureau letter. CHN asked the UN whether it had followed up or investigated the claims. It declined to answer.

With Cop15 less than a year away, a spokesperson for secretary general Antonio Guterres told CHN the UN was “determined to ensure that the CBD secretariat continues discharging its mandate without disruption”.

In her resignation announcement to staff, Pașca Palmer said: “I have poured myself with all my heart and might into the works of the convention, working tirelessly day and night together with my team at the secretariat to advance our agenda and navigate numerous institutional complexities and roadblocks.”

She said she intended to leave the body on 30 November. On Monday, Andersen wrote to staff that Tanzanian environmental jurist Elizabeth Mrema would be taking over the position on an acting basis from 1 November. Pașca Palmer will go on leave from Friday.