As the former Exxon boss is grilled by the senate, Karl Mathiesen captures the key exchanges. Watch the full hearing live here 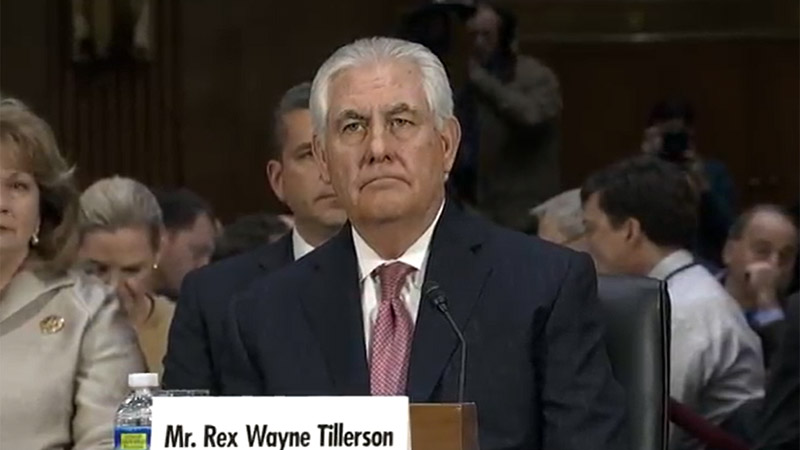 Rex Tillerson, the only-just-erstwhile CEO of ExxonMobil, faces the senate foreign relations committee on Wednesday at a confirmation hearing on his nomination as secretary of state.

There are few more influential jobs in climate politics than running the US state department. Thus, Tillerson’s role at the head of an organisation that has funded climate denial and been one of the world biggest polluters has raised questions over how he would conduct himself as Donald Trump’s foreign representative.

His close working relationship in Russia and with its president Vladimir Putin will dominate proceedings. One key question is whether the US will continue sanctions against the country. If not it could reopen a massive oil deal between Exxon and the Russian oil company Rosneft.

Tillerson has been criticised for embodying the conflicts of interest that are becoming the defining characteristic of the Trump administration. Today, Climate Home reveals that Tillerson would be in a position to recommend that charges that accuse his former employers of complicity in severe human right violations in Indonesia are dropped.

We will update the key exchanges in what promises to be a revealing, fractious hearing throughout the day.

Tillerson continues on, unflustered, relentless, hammering away at the senators’ questions like an oil derrick. The hearing could stretch into Thursday, so we will wrap up the blog.

In short, Tillerson revealed a less woke attitude toward climate change than had been trailed in the media. At one point he noted that the statement on climate science from the Exxon website was not exactly his own view, saying: “Our ability to predict that effect [of greenhouse gases], is very limited”.

He said the US should keep its seat at the table of international climate negotiations, but refused to agree that the US should be a leader within those meetings. Instead he framed it as a way of protecting US interests and competitiveness.

He refused to be drawn on the matter of what Exxon knew about climate change during the 1990s, the subject of a series of explosive reports last year.

Edward Markey, the Democrat senator from Massachusetts, asks for further reassurance that the Trump administration state department will honour the Paris agreement and continue to lead on climate change.

Tillerson replies: “There will be opportunity, and I’m sure the president elect will want the opportunity, to conduct a fulsome review of our policies around engagement on climate issue through global accords through global agreements and as I indicated I feel free to express my views to him around those.

“I also know that the president as part of his priority in campaigning was America first. Well there’s important considerations as we commit to those accords and as those accords are executed over time – are there any element of that that put America at a disadvantage.

“I think it’s important for America to remain engaged in those discussions so that we are at the table expressing a view and understanding what the impacts may be on the American people and American competitiveness.”

1710GMT: I’m not telling you what Exxon knew

Tim Kaine, former vice-presidential nominee, asks Tillerson specifically about the level of knowledge he had of the revelations made in reports by Inside Climate News and the Los Angeles Times that Exxon scientists knew of the dangers of climate change long before the misinformation campaign waged by Exxon.

Kaine: “Are these conclusions about ExxonMobil’s history of promoting and funding climate science denial, despite its internal awareness of the reality of climate change during your tenure with the company true or false?”

Tillerson: “Since I’m no longer with ExxonMobil, I’m in no position to speak on their behalf, the question would have to be put to them.”

Tillerson: “A little of both.”

Kaine: “I have a hard time believing you lack the knowledge to answer my question.”

Kaine then filed some documents on the record. One, a 1982 letter from Exxon researcher Roger Cohen that outlined the scientific consensus that had emerged that greenhouse gas emissions would cause 1.5-3C warming if unabated.

Kaine then tabled an op-ed produced by Exxon in 2000 denying that scientists could attribute the rise in surface temperature to greenhouse gas emissions.

Under questioning from Democrat Tom Udall, Tillerson is finally asked to answer many of the questions that critics have of Tillerson’s attitude to climate change.

Udall asks where he would condone the targeting of state department officials that have engaged in climate negotiations – a prospect raised by an attempt by Trump’s team to gather the names of such officials.

Tillerson’s response is simple: “No sir, that’s be a pretty unhelpful way to get started.” To laughter in the room.

He also spends a good deal of time waffling around his views on a carbon tax, which appear to be something that he backs only because its better than a cap and trade system and only if the money goes back into the economy rather than government coffers… and besides it doesn’t matter because that’s the purview of another department.

He tells Udall that he has spoken to Donald Trump about his views on climate change. “I look forward to providing those if confirmed to him in discussions around how the US should conduct its policies in that area… I think it’s important to note that he has asked and I feel important to express those views.”

But what EXACTLY are those views, interjected committee chair Bob Corker (R)?

Tillerson: “I came to the conclusion a few years ago that the risk of climate change does exist and that the consequences of it could be serious enough that action should be taken. The type of action seems to be where the largest areas of debate exist in the public discourse.”

Asked to be more succinct, Tillerson says: “The increase in in the greenhouse gas concentrations in the atmosphere, are having an effect. Our ability to predict that effect, is very limited.”

1618GMT: Tillerson endorsed as secretary of state… by OPEC

“The United States is extremely lucky to have such an asset step into the state department at these challenging times, considering the geopolitics of the world,” said Mohammed Barkindo, the secretary of the oil cartel told CNBC.

Sanctions are a “powerful tool” says Tillerson, that he says he would use, but that they can harm US business interests. He says that he has never lobbied against sanctions, nor, to his knowledge had Exxon ever done so. That’s not what Politico reports here:

“ExxonMobil successfully lobbied against a bill that would have made it harder for the next president to lift sanctions against Russia, clearing the way for the oil giant to restart a program worth billions of dollars if Donald Trump eases those restrictions as president.”

Exxon could be one of the biggest beneficiaries of lifting the Obama administration sanctions on Russia.

An obviously organised group have been interrupting the hearing periodically, brandishing “Reject Rexx” signs and calling out Tillerson’s complicity in the global warming crisis. One said “my house was destroyed by Hurricans Sandy” as she was lead out.

Over an hour into the hearing and the number of protesters outnumber questions on climate change three to one.

"Protect our children and grandchildren." pic.twitter.com/dTXW4CcWiY

1530GMT: US should continue to engage (but not lead) climate negotiations

After a flurry of questioning on Russia, ranking member of the committee Ben Cardin (D) finishes with: “Do you agree that the United States should continue in international leadership on climate change issues with the international community?”

Tillerson: “I think it’s important that the United States maintain its seat at the table on the conversations around how to address threats of climate change, which do require a global response. No one country can solve this alone.”

Tillerson’s comments appear to contradict the opinion of his would-be boss. Trump has threatened to “cancel” the Paris climate agreement, which the US helped broker. This could mean he might withdraw from the UNFCCC treaty that underpins climate negotiations. However note the difference between the question and answer – Cardin wants to know if the US will lead. Tillerson pointedly said that the country should just stay at the table.

#Tillerson says US should "maintain a seat at the table" on global conversations on #climate." Sounds like stay in unfccc; what about Paris?

Tillerson makes a long and sweeping opening statement that focuses on Russia and Islam. But doesn’t explicitly mention climate change. He does acknowledge the US’ necessary role as a global leader and defender of human rights.

“Our values are our interests when it comes to human rights,” he says.

On cutting funding to the Green Climate Fund: “In consultation with the president it’s my understanding that we are going to look at all of these things from the bottom up.”

On whether he believes the US should fund coal power plants overseas: “Nothing lifts people out of poverty like electricity,” he said. “Whatever is the most efficient, effective way to deliver electricity to these areas that don’t have it, that should be the choice.”

On his conflicts of interest with Exxon: Tillerson says he will recuse himself for the statutorily required one year and after that he would take advice from his counsel’s office on his legal obligations.