Frans Timmermans, who would oversee climate efforts, laid out his vision for every EU policy to be aligned with its carbon reduction targets 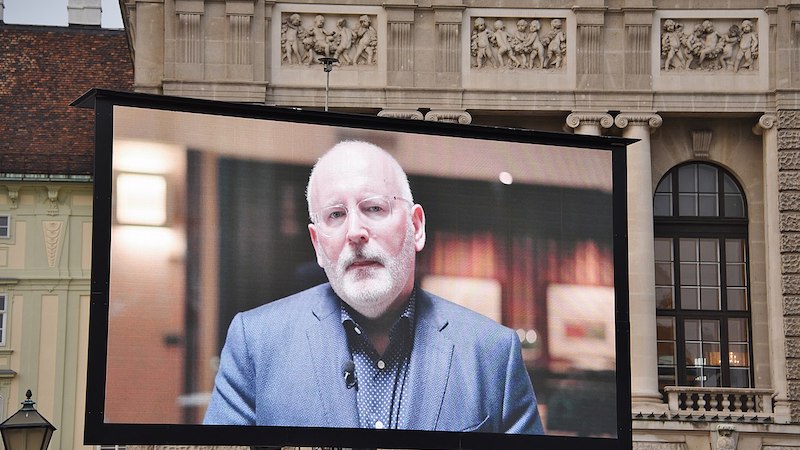 The politician set to run Europe’s climate policy said on Tuesday said he would be “extremely surprised” if the new commission does not decide emissions need to be cut “by at least 55% by 2030”.

To do that and achieve climate-neutrality by 2050, nominee executive vice president Frans Timmermans told lawmakers, all European policy must take into account their climate impacts.

A social democrat and former Dutch minister, Timmermans has been tasked by EU Commission president-elect Ursula Von der Leyen to develop a “European green deal” over the next five years, in a major elevation of the climate portfolio to one of the three executive vice presidents.

From emissions reductions to air and water quality, pesticides and micro-plastics, food production, and biodiversity, energy efficiency and transport  – Timmermans set-out the scope of the deal, which he said will “improves lives” while putting the bloc on track to decarbonisation.

“The green deal will only be successful if all Europeans are part of it,” he said, adding that “fairness” needed to be put at the heart of all policies.

Opening the hearing in Strasbourg, the chair of the European parliament’s environment committee, French centrist MEP Pascal Canfin, said Timmermans would be responsible for two thirds of the EU budget.

During the three-hour session, Timmermans spoke with confidence about the issues but gave few examples of concrete measures that could be proposed or how money would be spent.

If confirmed when the parliament votes on the package of nominee commissioners on 23 October, Timmermans promised to root out inconsistencies preventing ambitious climate action.

“We need to make sure that everything we do is compatible with our goal to be climate neutral by 2050,” he told MEPs, adding that would be his “toughest task internally”.

Timmermans gave one of the strongest indications yet the EU will deepen its 2030 climate target to 55% of emissions reductions from 1990s levels. He said the EU Commission was “in the middle of getting the information we need” to increase the 2030 climate target.

“I will be extremely surprised if that information does not lead to conclusions that we need to reduce emissions by at least 55% by 2030,” he told lawmakers. “Just getting a target for 2030 won’t get us there, we need to know how we get there.”

“If we really want to make our impressions and lead the world we really need to have our facts together before next year’s [UN climate talks] in Glasgow,” Timmermans said. “That is my ambition and I hope we can get there”.

The EU’s current 2030 target is to reduce emissions by 40%  but the bloc is on track to overshoot its goal, according to the Commission. Under the Paris Agreement, governments, including the EU, are due to update their 2030 climate plans before the end of next year.

Von der Leyen proposed a two-step approach to increase the EU’s 2030 target to 50% and possibly hike it to 55% in 2021, contingent on action from other major emitters.

Dutch Green MEP Bas Eickhout insisted time for a two-step approach was running out, and pressed Timmermans to increase the target directly to 55%. Timmermans said it was “a really good question” and that he agreed. “But going from 50% to 55% we will be asking for some really tough extra measures to be taken. You can’t fault the commission for wanting to analyse that and the feasibility of that”.

Campaigners from the NGO Climate Action Network Europe expressed concern that announcing a new target just before next year’s climate talks “might not allow for member states’ approval well in time” and “thereby depriving the EU of its global leadership role”.

Among other proposals, Timmermans said he was ready to extend the EU’s Emissions Trading Scheme (ETS) to other sectors, including shipping, proposed “a massive reforestation project across Europe”, promised to be “extremely well prepared” for next year’s biodiversity conference and to strengthen climate diplomacy.

Timmermans’ presentation pleased progressive lawmakers. The Socialists and Democrats group said in a statement he was “the right person to ensure the EU lives up to the Green New Deal citizens expect”.

The Greens welcomed Timmermans’ commitment to climate action but warned the green deal risked remaining “a set of non-binding strategies” and called for more clarity on phasing out fossil fuels and agriculture.

The hearing also exposed the lack of consensus for a green deal among some right-wing lawmakers. Conservatives and Reformists Czech MEP Alexandr Vondra argued “the green deal will cost us more than our societies are able to sustain”, adding the cost burden would affect lower and middle-income families worst.

Italian MEP Silvia Sardone, from the right-wing League, described proposals for a green deal as “untenable and ideological”, accusing the EU Commission of trying to “reinvent the wheel”.