The fight for the world’s largest forest

“Smell the difference?” Lyubov Alikina, the 59-year old defender of Siberia’s forests, asks from the front-seat of the truck. “That’s the smell of freshly cut wood.”

The dense curtain of trees, only interrupted by a sandy trail, grows thinner, until eventually it opens on a bare patch of land the size of three football pitches. Camped at the back of the truck, a berry-picker who has been foraging in the area for 10 years, swears.

Loggers have taken all of the cedar, leaving scrawny pines and eviscerated soil in their wake. It is the worst case of illegal cedar felling Alikina has seen. The trees have been taken, in all likelihood she says, to feed enormous demand from Chinese factories.

This is Cheremkhovsky forest. Although it covers a huge sweep of terrain – 7900 sq km – it is but a dot in the sprawling 12 million sq km Russian boreal forest, or taiga, the world’s largest forested region. Nearly a quarter of the planet’s forests are here. The Amazon, by way of comparison, stands at 5.5m sq km.

This northern summer, even as the Amazon was ablaze, more than 70,000 sq km of Russian taiga was also torched. The survival of both forests is vital. The Amazon’s thick above ground vegetation stores massive amounts of carbon. But boreal forest soils are hugely important carbon stores.

Just like the Amazon, the stressed taiga faces a multiplicity of threats. Not least illegal logging, driven by demand from the world’s largest wood importer: China.

Logging bans in China’s forests have generated a demand for timber – both legal and illegal – from neighbouring countries. Around two thirds of Russian timber exports are to China, where factories process it into furniture and flooring. The products are either exported around the globe or, increasingly, sold to the country’s soaring middle class.

No one can say for sure what the extent of illegal logging in Russia is, but it is likely to be growing, according to WWF and Greenpeace. The Russian forestry agency estimates illegal logging is 0.5-1% of total volume. However, Russian media has since exposed the incoherence of such figures with income from timber products. Independent experts quoted by national publication Gazeta, put it at 15-30% of all felling volume.

The Irkutsk region, where the Cheremkhovsky forest lies, has one of the worst deforestation rates in Russia and one of its largest illegal industries.

Alikina is on a mission is to expose the loggers stealing the forests she sees as her own. In 1983, she and her husband were caught by a radioactive cloud of sulfuric acid emitted during an accident at the Priargunsky uranium enrichment plant in Krasnokamensk, 60km away from the Russian-Chinese border. The cloud robbed her of her husband, who died of cancer in 1997, and left her with a lifetime of asthma.

After months of shuttling in and out of hospital, doctors suggested she live in a coniferous forest by a stream. She bought a dacha, Russia’s traditional holiday home, in the taiga and returned there as often as her meagre state pension would allow her to. One day in 2015, a confrontation with loggers attempting to illegally strip the neighbouring forest sealed her vocation as one of the country’s fiercest environmentalists. She is now accredited by the state to patrol the region and check on foresters’ credentials.

A 30 minute drive from site where the cedar had been cleared, Alikina’s driver, Viktor Marayev, who runs a business selling the forest’s wild herbs and berries, strides across another patch of brown land, his boots kicking up saw dust.

Workers in tractors hoist tree trunks. Others loiter on busted car seats beside a Soviet-era truck. Irkutsk is one of the most impoverished regions in Russia. For many, forestry and berry-picking is their sole opportunity for decent work.

“Who is the leader here? Who is brave enough to talk to the general?”

Alikina walks towards a caravan, her face set gravely. A man emerges. He is bald, in his 60s and wears a torn shirt.

“We have been informed that you are logging cedar,” Alikina says. The man invites her into the caravan, attempting small talk.

“We are not hiding from anyone, we have been working here for ten years in these forests. Would you like tea?”

“Check it all if you want,” he says, gesturing towards a heap of papers. Alikina wades into them, photographing them one by one.

Half an hour passes. The papers are outdated, possibly fake. “Stop the job or I’ll call the police,” Alikina says. The man exits the caravan and orders his men to stop working.

Alikina says later: “You saw how scared they were, you saw their reaction. And it’s the same everywhere, because each of them knows what he’s violating. All the papers he tried to scatter on the table – he gave himself away.”

In the papers, she found no evidence for where the timber would be sent. Although it is common for small firms like this to export to China she says.

China’s increasing impact on Siberia’s forests has prompted a response from Russia’s federal government. In an attempt to encourage a domestic processing industry, tariffs on unprocessed timber exports are high: 25%. In certain cases, unprocessed timber duties can be as high as 80%.

One month ago, the minister of environmental resources Dmitry Kobylkin threatened to ban timber exports to China altogether if the country didn’t tackle the illicit trade more proactively. In August, authorities in Irkutsk uncovered an illegal consignment of timber to China, prompting them to open a criminal investigation.

But Russian authorities are partly complicit. Corruption is allegedly widespread amongst state officials and the politicians who protect them, lining their own pockets in the process. Irkutsk has been dubbed by the local press a “paradise for the taiga mafia”. In June, the regional court sentenced the regional forestry minister Serguey Sheverda to imprisonment until 10 December for facilitating illegal logging by falsely designating 120 hectares of forest in the Tukolon nature reserve as diseased. Damages were estimated at more than $11.6 million (748m rubles).

The use of salvage logging – the practice of cutting down sick trees to avoid contamination or economic loss – as a cover for illegal activity is a widespread problem.

According to the local publication MK, in 2018 Sheverda’s Irkutsk ministry signed 440 agreements to clear supposedly diseased forests at a price of more than 18m rubles ($289,212). The timber was sold under contracts with loggers for 180 times the license fee.

Sheverda’s arrest was the “small tip of a big iceberg,” says Albert Yashin, a disenchanted former forestry official CHN met at his home in Irkutsk. “Every criminal must face justice.”

It was not always like this, says Yashin. While there used to be a clear distinction between the bodies overseeing the forestry industry and conservation under the USSR, reforms in the past years have blurred that line.

He traces the start of the downfall of forest conservation to the 1990s and the collapse of the Soviet Union, when public finance allocated to forestry rangers fell sharply. The state gave permission to rangers to earn a living by selling timber and that activity would eventually supplant forest conservation as the main source of revenue for many of them. 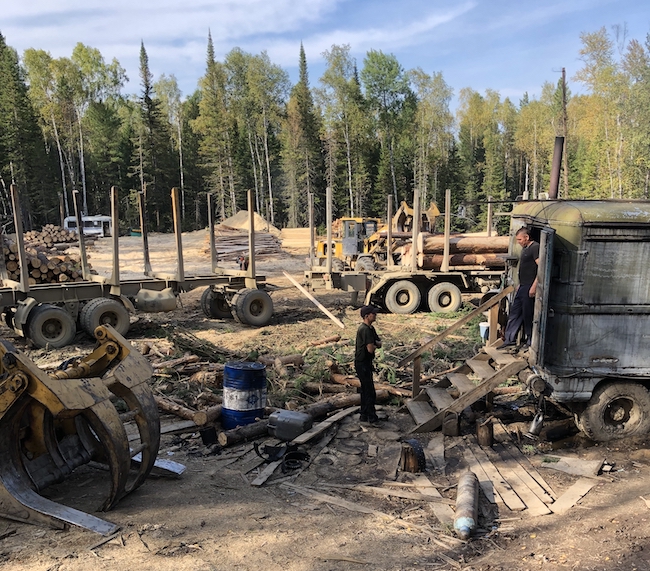 A new forestry code in 2007 worsened the situation by devolving responsibility for forests from Moscow to the regions. Sheverda, who became minister in Irkutsk in 2016, has overseen the complete incorporation of the conservation department with industry. In their entrance examinations, Yashin said, new forest managers are not required to know anything about caring for the forests.

“Working as a forester is just pathetic and impossible,” Yashin says “It’s a corrupt monopoly, I don’t want to do that anymore,”

Yashin, who led flood risk assessments and forestry inventories since the 1960s, also sees a link between the rise in illegal logging and the increasing floods in the region. At the end of June, record floods washed away the Tulun department in the west of Irkutsk, killing 25 people and inflicting losses on 39,000 residents.

While the reasons behind the floods, including the role of global heating, have yet to be established, it is widely understood that forests can help reduce flooding by acting as a sponge.

“When I started working [in the 1960s], the [forest] expanses were vast, the taiga endless. Floods started when they started demolishing the forests,” says Yashin.

Overall, “there is almost no response” from the Russian government, Konsantin Kobyakov, a forestry project coordinator at WWF told CHN. “There are some talks, but no real measures to prevent illegal logging, especially ‘grey’ logging operations,” he says, referring to practices such as the designation of healthy forests as diseased. Kobyakov believes the government’s lack of action is due to the relatively small economic impact of illegal logging, with the forestry sector representing less than 1% of Russia’s GDP. 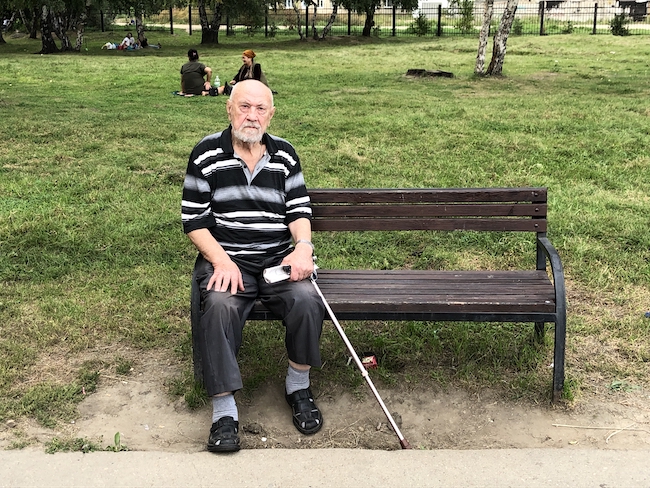 Environmentalists can hardly look to the international community for support, either. Strained relations with the West have withheld funding for environmental assistance over the years, including projects for the Global Environmental Facility. UN initiatives have also fallen short of addressing Russian boreal forests with the same level of concern as tropical forests.

This leaves citizens like Alikina, whom the media has variously described as the “angel of the taiga” and “people’s vigilante”, to fill the gap.

Alikina may slowly be winning the battle of public opinion. One petition demanding “a moratorium on deforestation and timber exports from Russia” has reached over 650,000 signatures.

“More and more people are voicing their support and calling and writing to us,” she says. “There is more discontent that [the authorities] are not saving the forest.”

Citizens’ intervention is not without risk. Alikina tells of a raid in May 2015 when three loggers brandished knives, axes and guns at her, before surrendering to the police. Marayev, meanwhile, was also punched in a raid.

“I am not afraid of anyone,” she says. “Let them be afraid.”