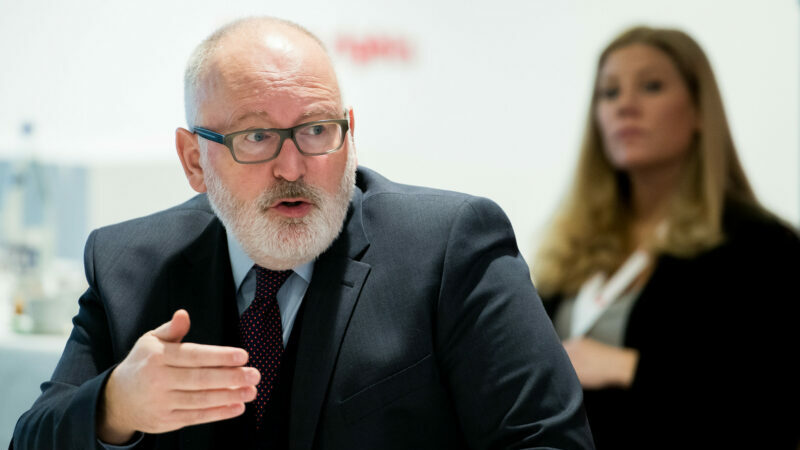 Climate action is getting a promotion in the next European Commission, with the portfolio assigned to one of three executive vice presidents.

Dutch social democrat Frans Timmermans was nominated on Tuesday to develop the “European green deal” over the next five years. He is to directly manage the climate change directorate (DG Clima) and coordinate efforts across agriculture, health, transport, energy, cohesion and environment.

Announcing the line-up in a webcast press conference, commission president Ursula von der Leyen said she wanted to create a “flexible, agile” team to deliver on the bloc’s priorities.

“At the heart of it is our commitment to become the world’s first climate neutral continent,” she said of Timmermans’ role. “Those who act first and fastest will be the ones who grab the opportunities of the ecological transition.”

In a mission letter to Timmermans, von der Leyen tasked him with proposing a climate neutrality law within his first 100 days in office. At the same time he should plan to deepen the EU’s 2030 emissions reduction target to 50% from 1990 levels. Under the Paris Agreement, countries are expected to submit updated national contributions by 2020.

Further raising 2030 ambition to 55% should wait until 2021, contingent on action from other major emitters through international negotiations, von der Leyen indicated.

We need an ambitious Green New Deal for Europe, which shapes the future for our children and ensures their health, prosperity and security on a green and thriving planet.

Pascal Canfin, a centre right Renew Europe MEP and chair of the European Parliament’s environment committee, said he “welcome[d] the new organisation of the European Commission… the ecological transition is dealt with as a priority”.

A welcome step forward to have a female president and a proposal for a gender-balanced @EU_Commission that has #ClimateChange as a priority. We are happy to work constructively with the new commission to save the planet. We have no time to waste! #NoPlanetB (1/3)

“Von der Leyen is elevating the political importance of climate to the highest level,” said Quentin Genard of think-tank E3G. Having DG Clima report directly to an executive vice president should give it more clout, he added.

Timmermans has emphasised his personal commitment to tackling climate change. “Green is not the sole property of the Green Party,” the socialist said during a TV debate in April.

“It is very welcome to have someone who has tried to position himself as such a green candidate to have a chance to demonstrate it,” said Suzana Carp of Sandbag.

Perhaps Timmermans’ biggest challenge will be to get sceptical eastern member states on board with faster emissions cuts. He has a tense relationship with the governments of Poland, Hungary and Romania, after clashes over the rule of law.

Part of his assignment is to establish a “just transition fund” to ease the pain for regions economically reliant on coal mining or heavy industry.

Vestager is be responsible for making Europe “fit for the digital age”, while Dombrovskis engenders “an economy that works for people”. Both build on responsibilities they held in the last commission.

A draft list of commission postings leaked ahead of the announcement sparked some concern by omitting the environment. Rules to promote biodiversity, clean air and water have historically been a major part of the commission’s workload. In the final version, environment and oceans went to Lithuania’s Virginijus Sinkevičius.

The youngest of the proposed intake aged 28, Sinkevičius comes from the Farmers and Greens Union, which runs to the right of the European Greens and has been silent on climate issues in Lithuania. But he told national broadcaster LRT climate action presented opportunities, adding “I hope that Lithuania will not shy away from climate change”.

Kadri Simson of Estonia is in line for the energy brief, Romania’s Rovana Plumb gets transport and Poland’s Janusz Wojciechowski will be responsible for agriculture.

They have been tasked with contributing to the green deal from their respective sectors, including work to bring international shipping into the EU carbon market and reduce free allowances for aviation.

While trade does not officially fall under Timmermans’ climate cluster, von der Leyen has asked commissioner Phil Hogan to design and introduce a carbon border tax – a complex and controversial tool to level the playing field with climate laggards. “You will use our trade tools to support sustainable development,” she wrote in a letter outlining his mission.

The assignment of candidates put forward by each member state to jobs is subject to approval in the European Parliament. Lawmakers start scrutinising nominees at committee level later this month and vote to confirm or reject them in October.