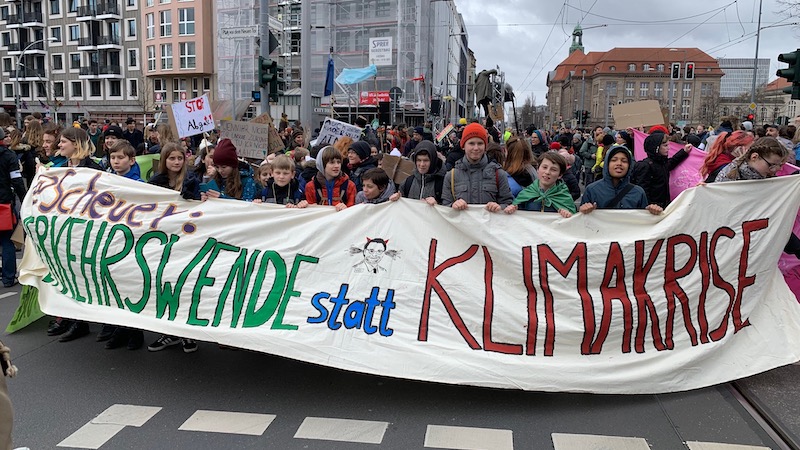 “We’ve just watched people ignore it. Slowly learning about it, you think this is absurd.”

In more than 100 countries, young people, including 18-year-old Maxime in London, have taken to the streets in frustration, anger and hope that a climate disaster predicted within their lifetimes can be averted. In extraordinary scenes, tens of thousands of young people demanded a response from their parents and politicians.

The winds of change are blowing in lignite-beholden Germany, with the country’s environment minister telling newspaper Taz that the country can “finally” join an international alliance to end coal power. Chancellor Angela Merkel has appointed a climate cabinet to steer new legislation through the Bundestag. Megan Darby got a preview of the interview.

In an excellent piece, Sara Stefanini describes how oil and energy giants are buying up the companies spreading clean energy tech in rural Africa. On the surface, these are high risk, low reward investments. But the potential to capture the data and loyalty of 600 million new customers who currently have no access to electricity is leading Shell, Total, Enel, Engie and many others to look to this new region.

Chile’s environment minister and the presumed next president of the UN climate talks Carolina Schmidt has warned that a UN decision to hold short notice climate talks in Santiago in December is going to make it very tough for the hosts. The capital is hugely busy during the pre-Christmas period she said, presaging three hour commutes and venue problems.

Geoengineering – artificial intervention in the planet’s atmosphere to slow warming – is widely seen as risky. But this week, the US and Saudi governments blocked an early attempt to research and eventually regulate the practice. The big oil producers stepped in to stop Switzerland from passing the proposal at a UN environment meeting. At its first major environment meeting after Jair Bolsonaro was elected president, Brazil aligned with the Trump administration…

… that meeting started in shadow on Monday after 22 UN staff and many other delegates died when a flight between Addis Ababa and Nairobi crashed. Leaders called for the tragedy to harden resolve to protect the environment.