UN staff and delegates to the UN Environment Assembly, which opened in Nairobi on Monday, were among 157 to die on the way from Addis Ababa 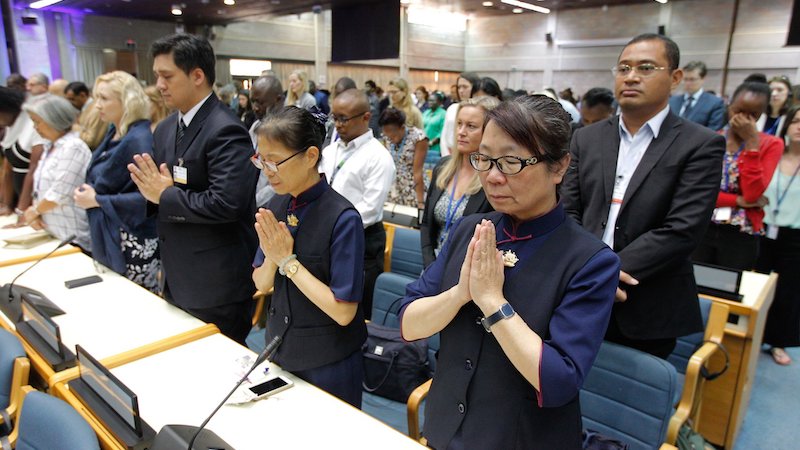 Delegates at the UN Environment Assembly, which opened one day after the crash of Ethiopian Airlines flight ET 302 (Photo: Joyce Msuya/UNEP)

At least 22 UN staff died in an Ethiopian Airlines plane crash on Sunday, along with many delegates travelling to a major environment summit, according to officials.

The acting head of UN Environment Joyce Msuya confirmed the loss of colleagues, although full passenger lists of the flight from Addis Ababa to Nairobi are yet to be publicly released.

“The environmental community is in mourning today,” she said in a statement released as she participated in the opening ceremony of the UN Environment Assembly in the Kenyan capital on Monday.

“Many of those that lost their lives were en route to provide support and participate in the UN Environment Assembly. We lost UN staff, youth delegates travelling to the assembly, seasoned scientists, members of academia and other partners,” said Msuya.

“The environmental community is in mourning" – many victims of Ethiopian Airlines crash were on route to UN environment assembly https://t.co/YWM26IzPKV pic.twitter.com/WNwjlL7k0r

All 149 passengers and 8 cabin staff died in the accident, the airline said. The cause of the crash has yet to be determined. The airline has grounded its fleet of Boeing 737 8 Max aircraft – the same model involved in a recent disaster in Indonesia. Ethiopian Airlines said that it had contacted the families of the dead.

At the opening of the assembly, head of UN Habitat Maimunah Mohd Sharif said 22 UN personnel were known to have died. UN offices lowered the organisation’s flag to half mast on Monday.

The Associated Press reported that 32 Kenyans were killed in the accident, nine Ethiopians, eighteen Canadians as well as multiple citizens from China, the US, Italy, France, the UK, Egypt, the Netherlands, India and Slovakia.

“The entire UN Environment Assembly will honour them in our efforts this week,” Msuya said.

The assembly aims to generate a sharper political focus on biodiversity, climate change and the natural systems that support human civilisation.