Katowice brief: US has it both ways 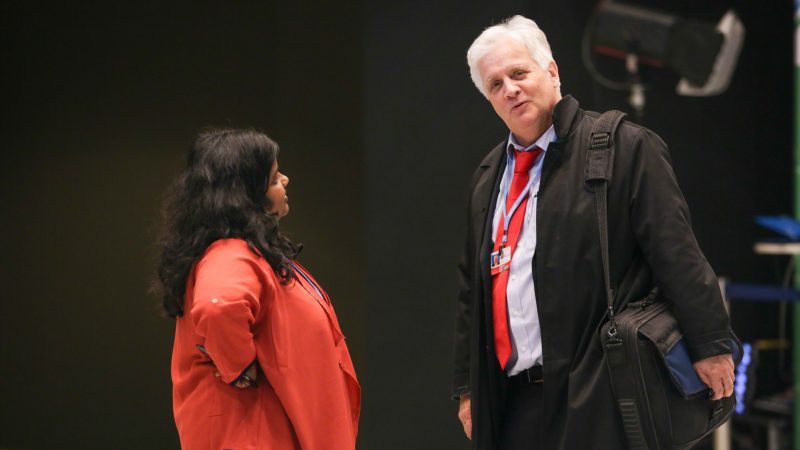 The US delegation in Katowice is walking a delicate line.

While the White House touted its fossil fuel industry on the sidelines of the Cop24 on Monday, state department negotiators remain deeply engaged in talks on the future of the Paris deal.

The apparent endgame: push hard for a deal on climate rules that Donald Trump or his successor will be able to swallow, just in case the US never leaves or chooses to return. This, at least, is the sense for negotiators from other countries. “I think they are keen to secure a deal that’s fit for a future independent of their administration,” said one.

CopCast: What is the US doing at Cop24?

Our daily podcast from Cop24 turns to the US’ twin strategy: tout coal on the sidelines and negotiate hard to future-proof the rules.

The Polish presidency of Cop24 has organised several work streams for ministers who are debating the Paris rulebook this week. One notable omission from the list of issues is an announcement from this conference on raising ambition on climate change. This has green groups worried.

Reality check: Michał Kurtyka, the Polish minister running these talks, told a press conference that ambition would be a subject of discussion tomorrow at the Talanoa Dialogue, where ministers will share their national stories of success and failure.

“Parties will need to face the reality of their engagement and measure the distance between what is currently on the table and what is needed,” Kurtyka said on Monday. Natalie Sauer has a helpful explainer on the event.

Barred from participating in the UN body by mainland China, Taiwan will not be ignored. The disputed state has planted magazines detailing its climate action plans in hotel rooms in Katowice, while locals can board trams plastered with bright red logo “Taiwan can help”. The Taiwanese ambassador to Poland also held an event at the Katowice Hotel, complete with classical music.

In a special edition of The Warsaw Voice, the state’s environment minister, Lee Ying-Yuan, said: “Taiwan has long been unfairly isolated from the United Nations”. This has not prevented it from committing to halving its emissions by 2050 by comparison to 2005. He concludes with a Confucian saying: “A man of morality will never live in solitude; he will always attract companions.”

Ministers filed into the plenary to talk about pre-2020 action on Monday. In this period, only developed countries have targets under the international regime  – a point the developing world never fails to hammer home.

Melissa Price said Australia was “very confident” of meeting its 2020 emissions target, glossing over plans to use a dubious accounting trick to do so. She was also silent on her prime minister’s refusal to chip in more financial support towards a $100 billion collective climate finance goal. Karsten Sach of Germany, which is lagging its 2020 emissions target, emphasised a commitment to inject €1.5bn into the Green Climate Fund.

China’s Xie Zhenhua and the EU’s Miguel Arias Cañete boasted of decoupling economic growth from greenhouse gas emissions. It fell to negotiators from the floor to point out the gaps, including an increasing reliance on private money to pad out the climate finance figures.

“We have a huge unfulfilled task ahead of us,” said India’s Ravi Prasad, adding that countries responsible for cutting emissions and delivering support must make up for any pre-2020 shortfall later.

Rebel with a cause

Chairing the session was Rachel Kyte, head of the UN’s Sustainable Energy for All. On her lapel, alongside the colourful wheel representing sustainable development goals, was the symbol of Extinction Rebellion, a grassroots movement emerging from the UK.

The rebellion promotes civil disobedience to demand radical climate action from the government. So don’t be surprised if you see Kyte supergluing herself to a coal plant before this is over.

Ministers from Egypt and Germany are leading talks on climate finance elements of the rulebook, while facilitators are due to tidy up the drafting by noon tomorrow.

Mali’s Seyni Nafo, who has been co-chairing the technical negotiations, told Climate Home News the toughest fights would be over the words “new and additional”, reference to loss and damage and whether to report loans at face value or their grant equivalent.

From an African perspective, Nafo added they wanted to make sure there was space for discussion around indicative future finance flows. “For us, the information is useless if there is not the opportunity to have an engagement with our partners,” he said.

Saudi Arabia wants to wait for the UN climate science panel’s next report, due in 2022, to address the “gaps and challenges” in its October report on the impacts of a 1.5C rise in the global temperature, the kingdom said in a statement on Monday. Then, it hopes, “a consensus to welcome it among all parties can be reached”.

Saudi Arabia drew heavy criticism over the weekend for opposing a push to “welcome” the 1.5C report in the summit’s final statement. It, along with the US, Russia and Kuwait, said it was enough to “note” the findings.

On Monday, Saudi Arabia said it “recognises the efforts” of the climate science panel is creating “comprehensive, neutral and non-policy prescriptive reports”. But, it stressed, there is still a lack of information. “We recognise that the current gaps, including the limited literature and scientific uncertainties in the 1.5C report, still requires further research and analysis.”