In a moment of drama in Poland, countries closed ranks against a push by oil producers to water down recognition of the UN’s report on the impacts of 1.5C warming 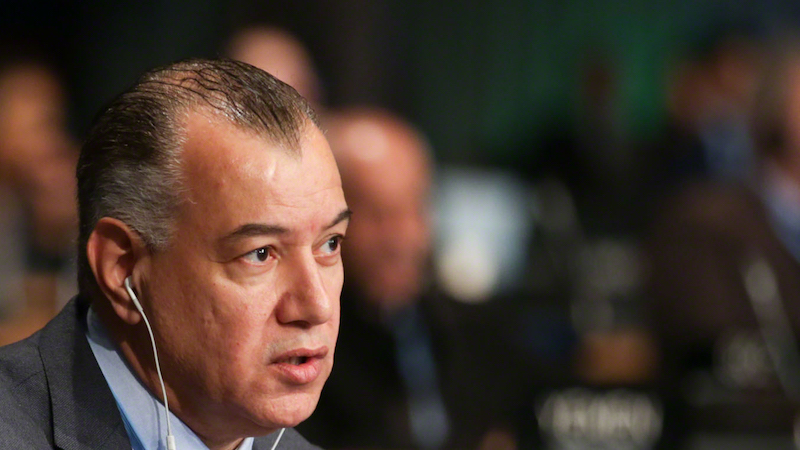 Four big oil and gas producers blocked UN climate talks from welcoming the most influential climate science report in years, as a meeting in Poland descended into acrimony on Saturday.

By failing to reach agreement after two and half hours of emotional negotiations, delegates in Katowice set the scene for a political fight next week over the importance of the UN’s landmark scientific report on the effects of a 1.5C rise in the global temperature.

The battle, halfway through a fortnight of Cop24 negotiations, was over two words: “note” or “welcome”.

Saudi Arabia, the US, Kuwait and Russia said it was enough for the members of the UN climate convention (the UNFCCC) to “note” the findings.

But poor and undeveloped countries, small island states, Europeans and many others called to change the wording to “welcome” the study – noting that they had commissioned it when they reached the Paris climate agreement in 2015.

“This is not a choice between one word and another,” Rueanna Haynes, a delegate for St Kitts and Nevis, told the plenary. “This is us, as the UNFCCC, being in a position to welcome a report that we requested, that we invited [scientists] to prepare. So it seems to me that if there is anything ludicrous about the discussion that is taking place, it is that we in this body are not in a position to welcome the report.”

The four opposing countries argued the change was not necessary. Saudi Arabia threatened to block the entire discussion if others pushed to change the single word – and warned that it would disrupt the last stretch of negotiations between ministers next week.

The aim of the Cop24 climate summit is to agree a dense set of technical rules to underpin the Paris Agreement’s goals for limiting global warming to well below 2C, and ideally 1.5C, by the end of the century.

The scientific report was published by the Intergovernmental Panel on Climate Change (IPCC) in October. It found that limiting global warming to 1.5C, rather than below 2C, could help avoid some of the worst effects of climate change, and potentially save vulnerable regions such as low-lying islands and coastal villages in the Arctic. But it also made clear that the world would have to slash greenhouse gases by about 45% by 2030.

Before the plenary on Saturday, the UN’s climate chief Patricia Espinosa said she hoped to see countries “really welcoming and highlighting the importance of this report… Even if the IPCC is very clear in saying how difficult it will be to achieve that goal, it still says it is possible”.

Just a few months before the gilets jaunes protests threw France into turmoil, Valérie Masson-Delmotte presented science to the government, warning climate policy without public consultation was risky. Follow us on Soundcloud and all good podcast apps, and please share.

The US, which raised doubts about the science behind the report before it was finalised, said on Saturday that it would accept wording that noted the IPCC’s findings – while stressing that that “does not imply endorsement” of its contents. Russia said “it is enough just to note it”, rather than welcoming the report, while Kuwait said it was happy with the wording as it stood.

The push in the plenary to change the wording to “welcome” began with the Maldives, which chairs the alliance of small island states. It was quickly backed by a wide range of countries and groups, including the EU, the bloc of 47 least developed countries, the Independent Association of Latin America and the Caribbean, African countries, Norway (another large oil and gas producer), Argentina, Switzerland, Nepal, Bhutan, the Marshall Islands, Belize and South Korea.

Negotiators huddled with the plenary meeting’s chair, Paul Watkinson, for nearly an hour to try and work out a compromise. But Watkinson’s suggestion – welcoming the “efforts” of the IPCC experts and noting the “importance of the underlying research” – fell flat. Delegates from Latin America, small islands, Europe, New Zealand, Canada, Africa and elsewhere argued it was not enough to highlight the work that went into the report, it needed to address the findings.

Watkinson said he was disappointed that they could not agree. But a negotiator said the talks will continue: “This is a prelude to a huge fight next week,” when ministers arrive in Poland. It will be up to the Polish hosts to find a place for the report’s findings in the final outcome of the talks.

Wording that welcomes, rather than notes, the 1.5C report should be the bare minimum, Belize negotiator Carlos Fuller told Climate Home News. However, “the oil producing countries recognise that if the international community takes it on board, it means a massive change in the use of fossil fuels”, he said. “From the US point of view, this is the Trump administration saying ‘we do not believe the climate science’.”

Fuller added: “In my opinion we have won the fight, because the headline tomorrow will be: the UNFCCC cannot agree the IPCC report’, and people will say ‘Why, what’s in the report?’ and go and look.”

The 1.5C science wasn’t the only divisive issue after a week of Cop24 talks, with countries still mostly holding their ground on the Paris Agreement’s rulebook.

Contentious decisions related to the transparency of reporting emissions and the make up of national climate plans have all been refined, but ultimately kicked to the higher ministerial level. Several observers raised the concern that some unresolved issues may be too technical for ministers to debate with adequate expertise.

Financial aid is still contentious issue. The rules on how and what developed countries must report on their past and planned funding, and the extent to which emerging economies are urged to do the same, remains largely up for debate.

In a further moment of drama on Saturday afternoon, Africa stood firm as UN officials tried to finalise a draft of the rules that will govern the deal. Africa’s representative Mohamed Nasr said the continent could not accept the deal as it was presented, forcing the text to be redrafted on the plenary floor.

The change will mean new proposals to be made to the text next week. That would allow African ministers to attempt to strengthen a major climate fund dedicated to helping countries adapt to climate change and push for less strict measures for developing countries.

“We have been voicing our concerns, maybe the co-chairs in their attempt to seek a balanced outcome they overlooked some of the stuff. So we are saying that we are not going to stop the process but we need to make sure that our views are included,” Nasr told CHN.

Mohamed Adow, a campaigner with Christian Aid, said the African intervention had “saved the process” by ensuring that dissatisfied countries could still have their issues heard.

“It’s actually much better than it’s ever been in this process at this stage,” he said. “Because this is the end of the first week and ministers have been provided with clear options. Of course nothing is closed but the options are actually narrower.”