A Pacific concept transported to Cop24 climate talks in Katowice, Poland, the talanoa aims to galvanise increased ambition from countries 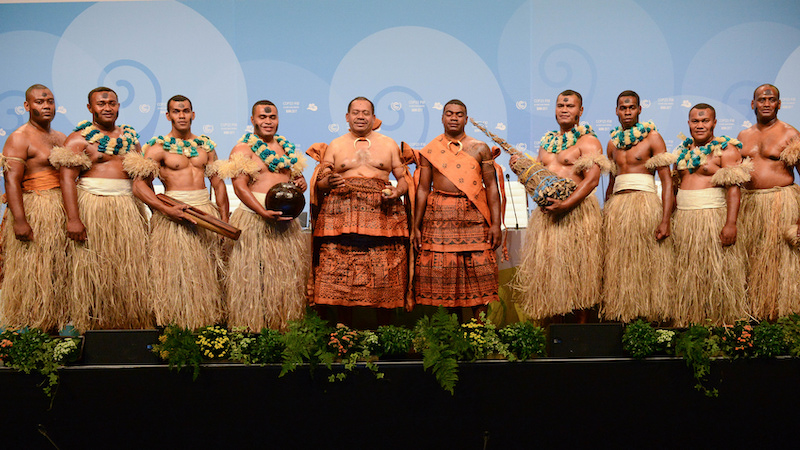 The opening of Cop23 in Bonn saw a kava ceremony on the plenary floor (Photo: UNFCCC)

Empathy is one of diplomacy’s best weapons.

That was the thinking when the Fijian presidency of the 2017 UN climate talks proposed to bring together governments and civil society through the unconventional platform of the Talanoa Dialogue.

In Fiji, “talanoa” means to hold a conversation in an inclusive, receptive space. It is traditional method of solving differences in the Pacific.

The Talanoa Dialogue seeks to break the climate deadlock by drawing participants closer together through sharing their stories of climate change. Governments, but also civil society, NGOs, businesses, cities and others have been invited to submit stories responding to three questions: Where are we now? How do we want to go? How do we get there?

To date, hundreds of countries, organisations and people have submitted their stories. These were read out in April and May at Bonn for a first exchange, and have rung through dozens of conference rooms since the procedure was initiated in January.

Talanoa, originally known as the facilitative dialogue, seeks to sidestep the power struggle inherent to negotiations. Confrontation and criticisms of other participants are forbidden, and round tables abound.

Why are we doing this?

The purpose of the dialogue is twofold: one, to monitor progress on the Paris Agreement goal of limiting warming to “well below 2C” and if possible 1.5C; two, to inform the next round of national climate pledges, otherwise known as nationally determined contributions (NDC). As they stand, NDCs set the world on course for 3-4C warming by the end of the century – dangerously far from the Paris targets.

What will happen in Poland?

The so-called preparatory phase of the dialogue, which served to gather stories and evidence on climate change, drew to a close on 6 December, with ministers sitting down on 11 and 12 December to work through the political phase.

Sat at seven round tables, ministers will be briefed on a recent UN science report on 1.5C of warming and take stock of the progress made so far. This, together with the lessons learnt from the preparatory phase, is designed to inspire them to boost domestic climate action.

But Gebru Jember Endalew, chair of the least developed countries group, says the process is unlikely to yield results in the room: “We don’t expect [the ministers] to promise to increase their ambition.”

How has it gone so far?

Participants had the opportunity to submit their ideas both before a meeting in Bonn in May and Poland’s Cop24. The first round yielded 417 submissions, 369 of which were from participants other than governments.

Although data is unavailable for the number of submissions for the second round, David Waskow, from the World Resources Institute, told CHN the focus was switching from NGOs to national actors.

Fiji and the Marshall Islands, have become the first to commit to increasing their NDCs.

How will we know whether the dialogue has been a success?

The dialogue will be vindicated over the next 12 months if countries change their pledges to the Paris Agreement to make them more ambitious.

Who are the big players and what do they want?

According to the World Resources Institute (WRI) and French think-tank Iddri, the Fijians and the Marshall Islands have been the most vocal in the talanoa discussions themselves.

The US, by contrast, appear to be less invested in the negotiations of the Talanoa Dialogue than in those revolving around the rulebook. This is logical, according to Lola Vallejo, head of the climate program at Iddri: there would be little sense for the US to strengthen their commitment to a deal which they are set to leave. After the dialogue was ignored by the federal government, US state, cities and business submitted their own documents showing that their efforts go some way to limiting the impact of inaction in Washington DC.

The EU is yet to find a common voice when it comes to its climate pledges. Climate commissioner Miguel Arias Cañete has said the bloc has de facto raised ambition by boosting its energy efficiency and renewable targets, but member states are divided over whether to formally increase the 2030 emissions target. The Polish hosts of the Cop24 talks are one of the most reticent member states.

The UK also deserves some credit for its enthusiasm, after having shelled out £1.7m of support to Fiji’s Cop23 presidency and held its own Talanoa Dialogue.