UN climate finance rules ‘dragging’ amid fight over who reports what

Developing countries want to know how much aid is coming; rich countries worry about ‘constitutional constraints’, at Cop24 climate talks in Katowice 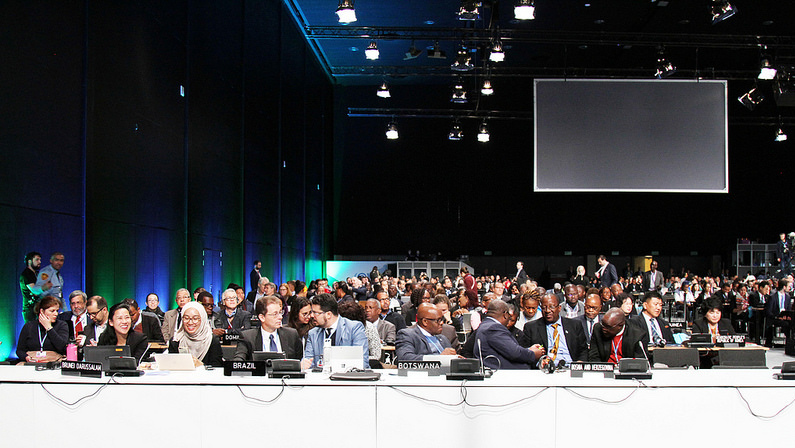 Financial aid for poor countries – and how it is counted, publicly reported and locked in for the future – is one of the biggest sticking points in global climate change negotiations. Again.

Climate negotiators at the Cop24 summit in Katowice, Poland, aim to agree a broad set of technical rules by the end of next week, to make sure countries meet the Paris Agreement’s goals for tackling global warming. But the finance rules remain particularly “sensitive”, and progress on bridging the divide is “dragging”, according to two negotiators.

As revised draft text on various elements trickled out on Wednesday and Thursday, the finance piece was one of the last to emerge. The page count had been whittled down from the previous version, but many open questions remained.

The latest draft on reporting past financial aid included 41 “options” and 185 square brackets, denoting phrases that could still change, according to analysis by Carbon Brief. Among the issues still to be decided: whether the accounting of past aid from developed countries should be tied to the reports they make every two years on future “indicative” support.

Money is always a contentious issue in these talks. In Katowice, the fight is over the rules designed to hold richer countries to their pledge to shore up $100 billion a year in public and private climate finance from 2020.

The question is how far developed countries will be required to go in committing to their pledges for future funding, and reporting on what they deliver.

Developing countries want firm reassurances on the sums they will receive, the type of development aid that is counted and where it is being funnelled. The more they know about future funding, they say, the easier it will be to fulfil their own pledges for tackling climate change, since many of them are conditional on support.

“If you ask for what will come in 10, 15 years, it will have higher  uncertainty. But when they report backwards on what they have already provided, you will be able to see how they have been really complying with their promise,” said Gebru Jember Endalew, chair of the least developed group of countries block and an Ethiopian delegate. “[Developing country] governments need some kind of unaggregated indicative figures, so they can consider it in their plan.”

The European Union and others on the developed side worry about tying their national budgets into international law – especially if they have to pledge funding more than a few years in advance. Some developing countries initially asked for funding to be committed alongside national plans for cutting emissions, which go out to 2030, according to observers following the talks.

“There are certain constitutional constraints for developed countries to report on the forward spending, which are difficult to overcome,” Elina Bardram, the European Commission’s chief negotiator, told reporters on Wednesday. EU countries and the European Investment Bank are the biggest contributors to climate finance, providing a combined €20.4 billion ($23.2bn) in public finance last year.

But while governments may not be able to lock their successors into future aid, providing more information on their intentions could help would-be recipients to seize the opportunities – whether those be forestry in Africa, for example, or renewable energy in the Caribbean, or flood defences in Pacific island countries.

Civil rights activist Katherine Egland lived under segregation as a child but saw it revive in the aftermath of Hurricane Katrina.

“There is some reluctance to provide upfront information. But it is very clear. We all do forecasting, budgeting. Providing upfront information doesn’t mean that you are legally locking in something,” said Amjad Abdulla, chair of the alliance of small islands states and lead negotiator for the Maldives. “We are not asking them to provide 10-20 year forecasting. At least what they have, they can provide. I don’t see any reason why they can’t.”

The draft text also pointed to uncertainties over who must report the financial aid, and who can or should report it – suggesting that emerging economies could be encouraged to do more.

Negotiators appeared to have made more progress on the rules for reporting future finance, cutting the number of pages and brackets. However, there were still questions around whether the reporting will be for “adequate and predictable” financial resources, or “clarity” on the financial support – and whether it would start in 2020, 2022 or some other time in the 2020s.

Endalew stressed that developing countries need to know what future support they will receive, but that the system is “facilitative”. “We don’t have a strong compliance system in place, it’s not punitive,” he said. “No one is going to be affected by the indicative figures being communicated.”