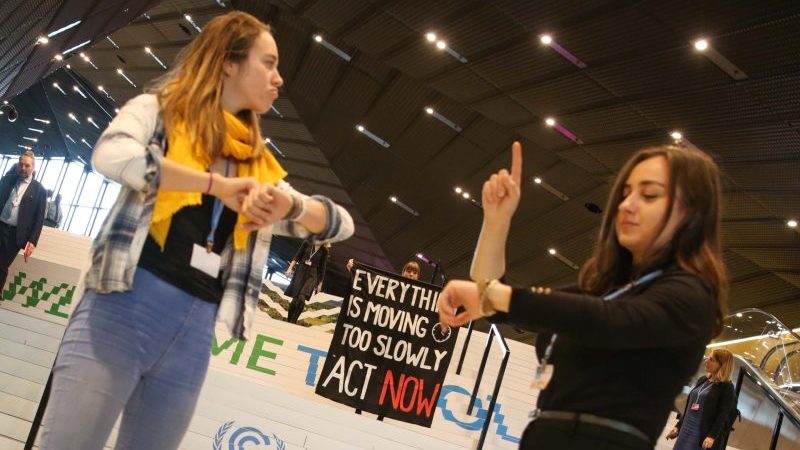 Activists at UN climate summits have the chance to influence negotiations (Pic: IISD/ENB | Kiara Worth)

At least 12 climate activists due to attend Cop24 have been denied entry at the Polish border or deported, Climate Action Network (Can) claimed on Friday.

Members of the network attributed this to Poland’s controversial anti-terror legislation passed ahead of the UN climate summit Cop24, which gives authorities the power to “collect, obtain, gather, verify, process and use information, including personal data about persons posing a threat to public safety and order, including outside the borders of the Republic of Poland”.

The environmental umbrella group, which represents over 1,200 NGOs worldwide campaigning on climate change, voiced fears that the Polish authorities may have compiled a “blacklist” of activists.

One of the cases was Nugzar Kokhreidze, a 350.org activist and member of the Georgian delegation. Polish border guards held Kokhreidze at the passport control point in Katowice international airport on Friday night. Kokhreidze posted a video message on Facebook, saying Polish authorities had told him “that my name and surname is in the banned list of some system”.

He appealed to the EU and UN authorities to intervene, adding: “There is not any explanation, there is not any evidence to say why I have not got permission.” Climate Home News has seen a photo of his visa support letter, which confirms he has accreditation to attend the climate summit. At time of writing, it was not clear whether Kokhreidze had been admitted or sent home.

Tune in to CopCast, our daily podcast from Cop24 in Katowice, on Soundcloud or iTunes

Svitlana Romanko, regional coordinator for Eastern Europe, Caucasus and Central Asia at 350.org, told CHN that the move represented an “unprecedented” dent into Cop’s reputation for friendliness towards civil society.

While the identity of the other blocked activists has not been revealed, CHN understands that some come from Ukraine, Georgia and Kyrgyzstan. Romanko said half of the 12 activists invited from her regional group had been turned away.

“As host of the most important climate summit since Paris, Poland has the eyes of the world on it and the question is, what sort of host does Poland want to be?” Greenpeace Poland director Bohdan Pękacki said. “Will it embrace the demands of people demanding action and allow their voices to be heard or silence them through denied entry?”

Poland’s Cop24 president, Michał Kurtyka, said on Saturday that he is in touch with authorities to “address this issue” and ensure that “all the rules are being respected in a constructive way”. “There is a commitment to allow everybody who wishes to engage constructively in this discussion, of course, to be part of it,” he told reporters.

Campaigners were preparing a march through Katowice on Saturday afternoon, to call for rapid action to tackle climate change.