Marielle Bacason’s life was turned upside down by the super storm; now she gives evidence to a London tribunal that oil companies have ignored 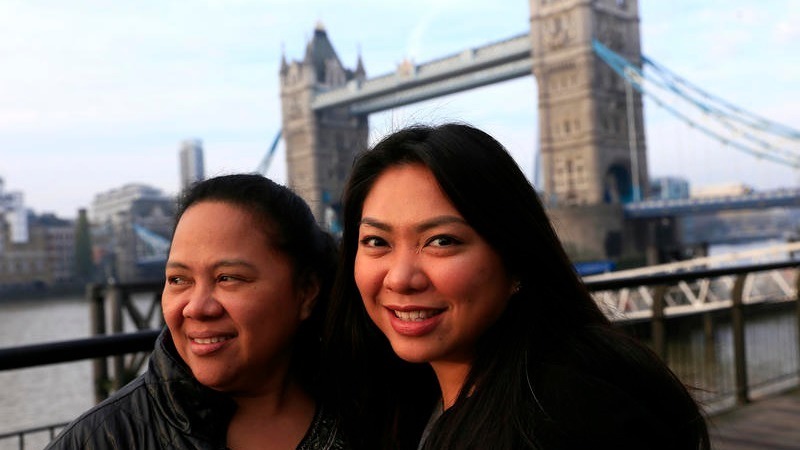 “As we were leaving Tacloban it reminded me of the scene from the Hunger Games. I thought: I never want to come back to this living hell again.”

Marielle Bacason, 27, is composed as she recalls living through the deadliest storm ever to hit the Philippines.

On the eve of the fifth anniversary of Super Typhoon Haiyan, she is telling her story in a London university classroom. The Philippines Commission on Human Rights is here to gather evidence as part of an inquiry into the culpability of big polluters for climate change.

None of the respondents, a list of 47 coal, oil and gas companies, showed up to defend themselves. That left the petitioners – Greenpeace and other campaigners – to shape a narrative linking fossil fuel profits to the hardship of families like Bacason’s.

Now working as a research nurse in the UK, Bacason took shelter with her family in a downtown hotel when the storm hit. They had been warned to expect five-metre-high storm surges, but she had no idea what that would look like. The strongest typhoon she had known before that was a category three. Haiyan would be category five, with some of the strongest winds on record.

She saw cars floating, trees uprooted and dead bodies lying in roads that were barely visible beneath the debris. The official death toll would reach 6,300.

Through an uncle in the navy, her family were able to secure places on a ship out to Cebu, along with 5,000 others. But it was when they returned in January to their mud-slicked bungalow, the lasting impact of the storm sunk in.

“It was at that time I saw my mum, the strong authoritative figure that I knew, she just broke down,” Bacason recalls. Her mother’s real estate business was in trouble. The young woman found herself shouldering extra responsibility, working two jobs and looking after her little brother.

After getting to know some aid workers, Bacason started freelancing as an interpreter in the relief effort. “It was very eye-opening for me, because I would see communities I didn’t normally go to. I realised I was a stranger in my own city,” she says.

Now she says her family has more or less bounced back from the disaster, but the worry lingers. “It is scary to think: what more is there to come? Will my family, will Tacloban and will my country be prepared for it?”

While the dynamics of tropical storms are complex, scientists warn climate change is making them wetter and more intense. And poor communities are most exposed to the consequences.

Veronica Cabe, 45, is one of the named petitioners in the Philippines inquiry and a community organiser from Bataan, across the bay from capital Manila.

In 2009, she was 10 kilometres from home when typhoon Ketsana hit. She waded through waist-high water for hours to bring pots of rice to her parents, sister and sister’s children, who huddled, cold and hungry, on the roof of the house. 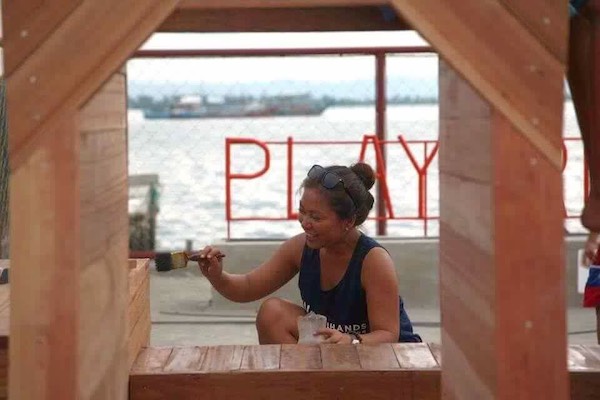 Marielle Bacason varnishes a playground in a Tacloban village during the time she spent working for a disaster relief agency (Photo: Marielle Bacason)

Afterwards, they had to stay with friends, borrow money and rely on food aid for months. “The floods have changed our lives. Part of our dignity was lost,” she says.

Since that storm, her family has been flooded out three times by monsoon rains. Cabe says the warnings have improved and the relief efforts are more sophisticated. But they still live in a flood zone because they have nowhere else to go.

Commissioner Roberto Cadiz told Climate Home News in February the inquiry was holding hearings in London and New York, as well as Manila, to give oil companies headquartered there every chance to respond.

He admits to being “a bit disappointed” at their refusal to engage. “We called this process as a dialogue on climate change and we would have a more enriching dialogue if they were here.” Previous responses from the industry have questioned the jurisdiction of the inquiry.

The commission is planning to report its conclusions by the end of June 2019, whether the industry takes part or not, Cadiz says. It never claimed jurisdiction to establish liability or demand damages, but aims to influence policy in the Philippines and internationally.

“Our process is about creating a consciousness, a conversation, gathering evidence to show how important an issue this is,” says Cadiz. “We have more leeway to discuss the issues, we can skip jurisdictional challenges because we are not a court.”

During a two-day hearing in London, the commission heard from lawyers, scientists and campaigners. The closest they came to the oil industry perspective is from shareholder activists and financial analysts who engage with companies on climate issues.

To Pedro Walpole, a hydrologist and social justice advocate who is advising the commission, the oil majors’ non-participation sends its own message. “I don’t take [the process] as one-sided. There is a clear choice and political strategy in not engaging,” he says. “That is how they control the situation.”

Cabe, as a long-time campaigner against coal plants, is used to being ignored – and persisting anyway. “Maybe I can now still appeal to the big polluters to please listen to us, consider our suffering seriously and remember that we also have rights,” she says.

Bacason, who had climate consciousness thrust upon her by events, urges companies to take care of future generations: “All I ask of them is to think about the long-term impacts of what they are doing.”