Link between Hurricane Harvey and climate change is unclear

Comment: Reports the devastating storm was made worse by humanity’s carbon emissions fail to grasp climate change is not just about warming 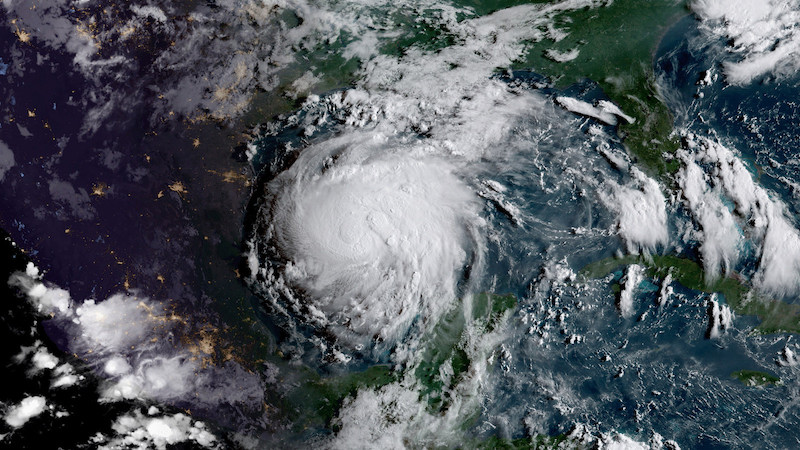 The unprecedented amount of rainfall accompanying Hurricane Harvey immediately raised the question whether and to what extent climate change is to blame.

In a warming world the vapour capacity of the atmosphere increases, and more extreme rainfall, like Texas is witnessing right now, is to be expected as a result. This leads many to conclude that climate change exacerbated the impacts of hurricane Harvey.

It is very appropriate to highlight that this is the kind of event we expect to see more of in a warming world. However, to apply this argument directly and attribute (and quantify) the impacts from Harvey itself to human-induced climate change, neglects that climate change is not just about warming.

In a changing climate, two effects come together: not only does the atmosphere warm up (thermodynamic effect) but the atmospheric circulation, which determine where, when, and how weather systems develop, can change as well (dynamic effect).

Dynamical factors and thermodynamic aspects of climate change can interact in complex ways and there are many examples where the circulation is as important as the thermodynamics.

Hence, while it is very likely that climate changes played a role in the intensity of the rainfall, it is far from straightforward in practice to quantify this role. As such, determining the role of climate change in increasing or decreasing the present and future likelihood of a rain storm like Harvey presents a challenge.

It is possible that while the magnitude of Harvey’s rainfall could have been increased due to climate change, the overall risk of extreme rainfall like this occurring in a warming world could have decreased or not changed.

For individual extreme weather events there are three possible ways climate change can affect the likelihood of the event:

The latter is not equivalent to climate change not playing a role, because such results are obtained when the effect from a warmer atmosphere is in the opposite direction to the effect on the atmospheric circulation.

To quantify the impact of human-induced climate change on Harvey and to estimate whether it indeed exacerbated the rainfall thus requires taking into account the atmospheric circulation as well as the overall warming.

This is possible and the emerging science of extreme event attribution is doing exactly that. However, while such studies are now routinely conducted for heatwaves and large scale rainfall in mid-latitudes (see Carbon Brief for an overview), it is still the cutting edge for hurricanes.

Attribution science sounds relatively easy in theory: “simulate what is possible weather in a world with climate change and compare it to simulations of possible weather in the world that might have been in a world without anthropogenic climate change”. But in practice this requires climate models that are able to reliably simulate the weather systems in questions over and over again to assess the likelihood of its occurrence. Many simulations are necessary to sample the statistics of extremes events. And to simulate hurricanes very high-resolution models are required that are expensive to run.

If we thus want to know whether Harvey is a “harbinger” for the future of Houston, the attribution question addressing the overall likelihood of a hurricane like Harvey to occur, which includes many variables other than temperature and sea level rise that interact, needs to be answered by carefully estimating the likelihood of such hurricanes developing in a warming world as well as how much rain they bring. It is a question scientists now can answer, but it requires a dedicated study.

Furthermore, attributing the flooding and damages to climate change add more complexity. The answer does not depend on the weather alone but on the land surface, local hydrology, management, … and ultimately who and what is in harms way.

Editor’s note: The Science Media Centre in London has been canvassing opinions of climate scientists. As they come in, we will post their responses below, unedited.

“The mechanics of tropical cyclones and how they interact with our changing climate is extremely complex. There is strong evidence that increasing sea temperatures increase the intensity of tropical storms when they develop. Rising sea levels also increase the risk of coastal flooding. When it comes to the frequency of these storms, it’s a much more challenging picture. At the moment we can’t say how all the different factors will combine to increase or decrease the number of storms we see.”

“The unprecedented rainfall from Hurricane Harvey is heavily influenced by blocking area of high pressure preventing the system from moving inland, concentrating the rainfall nearer the coast. The fact that the storm stalled just a little way inland and has indeed moved back out to sea means it has been able to collect more moisture from the sea and dump it inland.”

“As the continuing horror of Hurricane Harvey’s impacts unfold with the death toll sadly rising, it becomes increasingly apparent that this is not a natural disaster. When we build a city or build a dam, we must understand and deal with possible vulnerability to flooding at that point. By the time a storm forms, it is too late.

“The emergency responders and everyone helping out have done an incredible job. Nothing more could be asked of them. But emergency response to deal with people and houses in a floodplain is too late. Hurricane Harvey unfortunately shows yet again how decades of development and politics, which do not factor in environmental extremes, then causes a disaster.

Prof Richard Allan, Professor of Climate Processes at the University of Reading, said:

“There is a question of whether human-caused climate change has been a factor in this devastating storm. If the same conditions that caused the storm had occurred in a world without the warming observed over the last century, it would not have been as severe. A warmer ocean and the air above were able to inject greater quantities of moisture into the storm leading to intensification of already extreme rainfall. Additionally, sea level rise driven by climate warming combined with coastal subsidence related to human activities increased the storm surge while urban development such as paving over grasslands and prairies are likely to have exacerbated flooding.

“The dynamics of the storm are also curious but cannot easily be linked to climate change. When storms like this one move inland, they tend to die off. However, lingering near the coast where it has been, Hurricane Harvey maintained a healthy energy supply and has been able to continue picking up moisture and dumping it over land through sustained and intense rainfall.

“We can’t say that climate change ’caused’ Hurricane Harvey but the severity of the storm and associated damage was worsened by human activities, particularly the substantial emissions of greenhouse gases that are warming the oceans and the air above.”

Prof Dave Reay, Professor of Carbon Management at the University of Edinburgh, said:

“The scenes from Texas are shocking. Such extreme rainfall events are likely to get even more intense as our climate warms. When the flood waters finally recede, and the rebuilding of homes, businesses and lives begins, climate resilience needs to be front and centre.  Flood defence plans based only on past events will become obsolete as our warming atmosphere delivers much more rain and much more often. President Trump may have withdrawn the US from the Paris Climate Agreement, but he can’t opt out of the laws of physics.”

Prof Mike Hulme, Professor of Geography at the University of Cambridge, said:

“It’s important to separate out different elements the Houston flooding rather than simply saying ‘climate-change caused it’.  There was the Category 4 hurricane hitting land (unexceptional), the sustained heavy rainfall (exceptional), the exposure of the city to flooding and then the emergency response (little to do with ‘climate change’ as such).

“And we also need to be clearer about offering ‘climate-change’ as a causal factor.  Humans are changing the atmosphere in many different ways – emitting greenhouse gases, aerosols and smoke, changing the reflectivity of the land, and so on – each of which has different effects on the weather.  Rather than climate-change being a catch-all explanation for everything wrong with the weather, public and scientific commentary about the human influences on weather disasters needs to be much more nuanced.”

“What has made Harvey so disastrous for Texas is the fact that it has stalled and the circulation patterns are continuously feeding moist air from the Gulf of Mexico up over Texas. So perhaps the single most important question for attributing Harvey to climate change is whether such stationary hurricanes will become more commonplace in the future.

“This is a question about possible changes in circulation and hence dynamics, rather than changes in the moistness and warmth of the air per se and hence thermodynamics. Unfortunately it is not a question that can be answered with a great deal of confidence from current-generation global climate models since their spatial resolution is typically inadequate to address such regional matters with any degree of reliability. There is still uncertainty about many aspects of the dynamics of climate change, and this will only be addressed by investment in climate models and the top-of-the-range supercomputers needed to run them. This is an area where UK scientists must continue to collaborate strongly with their colleagues in Europe.”

“As Hurricane Harvey’s devastation is revealed, we must ask how those affected are being supported. Was transport provided for people with mobility difficulties and other disabilities? Were isolated elderly contacted and helped to evacuate? Will undocumented migrants wish to seek life-saving shelter and aid given fears of deportation?

“The disaster is about people, especially people who cannot help themselves.

“Climate change might have intensified the hurricane. Climate change did not cause the hurricane disaster. The disaster is about where we construct our buildings and how, what preparation we can do for storms, and how society chooses to support those without knowledge, resources, or opportunities to act on their own.

“The disaster is about us creating and continuing vulnerability, not about the specifics of a single storm.”