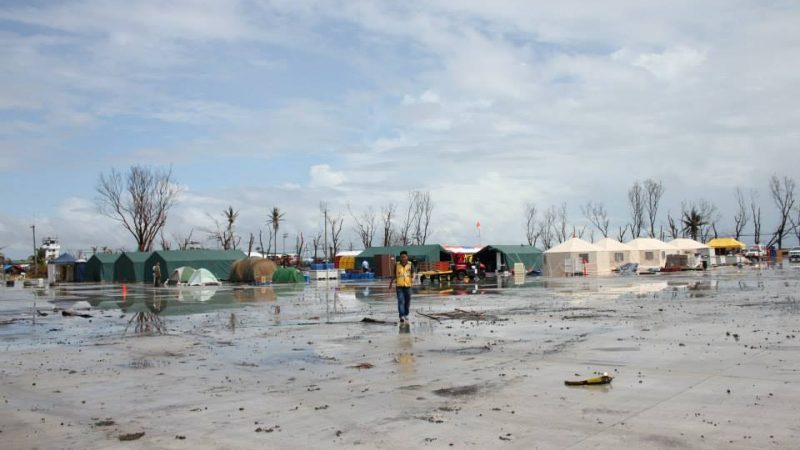 Emergency response to Typhoon Haiyan, one of the strongest tropical storms on record, in Tacloban, Philippines (Pic: Anne Orquiza/DFAT)

Climate Home News is one of the world’s most trusted sources of global climate news. Sign up for our newsletter.

The Philippines Human Rights Commission is set to confront carbon majors over their climate change impact with hearings in Manila, New York and London this year.

Responding to a petition that seeks to hold 47 companies accountable for Philippine communities suffering from extreme weather, the commission is taking its inquiries overseas.

It is in talks with climate law researchers at Columbia University’s Sabin Center and London’s Grantham Institute about hosting evidence sessions.

Commissioner Roberto Cadiz urged the targeted companies, which include Chevron, ExxonMobil and BP, to engage.

“The reason why we are holding two hearings outside Manila is to make this a very inclusive process,” he told Climate Home News by Skype.

“We continue to invite the respondents to participate in this process, because if they do not, we might come up with certain recommendations that will be adverse to their interests and they will only have themselves to blame.”

Since campaigners led by Greenpeace Southeast Asia lodged the petition in 2015, the response from its targets has been muted.

Half of the 47 companies, whose products generated around a fifth of historic greenhouse gas emissions, did not respond. Those that did questioned the commission’s jurisdiction, or argued it was for governments, not private companies, to tackle climate change.

Several international law experts have filed arguments in support of the petition, however. These back the commission’s mandate to investigate private companies over harm experienced by Filipinos and provide evidence to join the dots.

“Most of the companies being investigated have disputed the commission’s right to examine their contribution to climate impacts like hurricanes and heatwaves,” Sophie Marjanac of London-based firm Client Earth told Climate Home News.

“This is a missed opportunity to engage with the commission and prove to people affected by climate change around the world that they are committed to being part of the solution.”

Hearings outside the Philippines “should draw much-needed attention to this global issue”, she added.

While the commission cannot directly impose penalties on the respondents, it has other ways of exerting influence. Cadiz expects to recommend ways they could alleviate the human rights impacts of their operations in future – and shareholders to put pressure on companies to comply. “This is not just a legal proceeding,” he said.

Holding private companies to account for their climate impacts should be pursued in tandem with government action, Cadiz argued.

“I don’t see any conflict or tension between the two efforts,” he said. “In the end, they all converge on one point, which is trying to determine how climate change – the impacts of climate change – can be avoided or at least mitigated.”

The complaint focuses on investor-owned companies, excluding state-owned companies like the Philippines PNOC Exploration Corp or the Chinese-run CNOOC Ltd, which are considering a joint venture to open new drilling fields in the South China Sea.

The latest wave of climate litigation based on human or constitutional rights is bringing in a broader audience, said Joana Setzer, a researcher at the Grantham Institute.

“It is opening more opportunities for people to engage,” she said of the prospective hearing in London. “Human rights have this transnational component… I think the arguments on this are more persuasive.”

So far, the commission has consulted communities hit by intense tropical storms and environmental changes, gathering stories of how these affected their rights to food, water, health, homes and – in some cases – life.

The next stage is to establish how much of that lived experience can be attributed to climate change, and the extent of the respondents’ responsibility.

Hearings are due to start in Manila in March, with the overseas sessions likely to follow in the second half of 2018.