Rightwing president-elect has pledged to open the rainforest to farming and industry, while slashing environmental protections and democratic rights 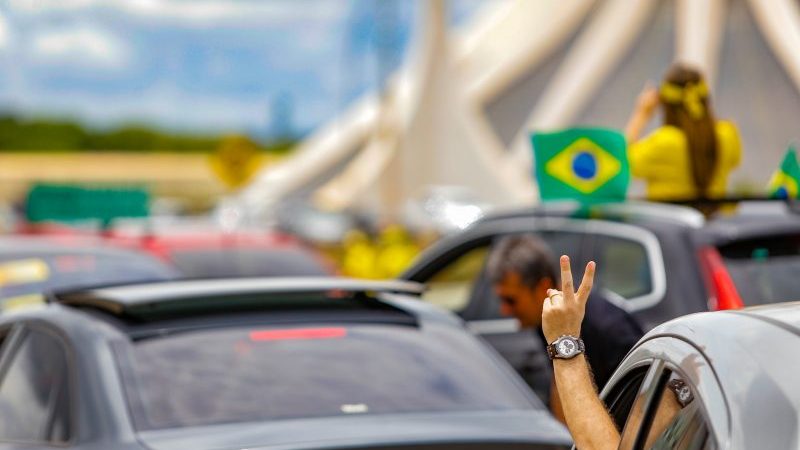 Jair Bolsonaro is the next president of Brazil, sparking fears for the future of the Amazon rainforest and the global climate.

In Sunday’s run-off, the right-winger won 55% of the vote, beating Fernando Haddad of the Workers’ Party.

Bolsonaro has courted the mining and farming lobbies, pledging to roll back environmental protections and gut federal enforcement. Early in the campaign, he threatened to withdraw Brazil from the Paris Agreement, but backtracked last week after an outcry at home and abroad.

Scientists have warned his proposed policies will send deforestation soaring, predicting clearances the size of the UK each year within a decade. That would make it “all but impossible” for Brazil to meet its climate commitments, four experts wrote in Mongabay.

The authoritarian leader’s praise for dictatorship and hostile comments towards minorities and political activists have also raised concerns about democratic freedoms.

In a televised victory speech, Bolsonaro described the result as a “celebration of freedom by a country”. He struck an inclusive tone, emphasising Brazil’s diversity, and assured the people his would be a “constitutional and democratic” government.

“What I most want is to follow the teachings of God, alongside the Brazilian constitution, inspired by great world leaders,” Bolsonaro added in a video broadcast on his Facebook page, brandishing a copy of Brazil’s constitution and a biography of Winston Churchill.

Rubens Born, an activist with climate network 350.org, said Bolsonaro’s rhetoric was emboldening extremists. One of his colleagues received a death threat last week over the office phone, he reported.

“He is promoting violence,” said Born. “Several NGO activists in different fields are getting threats… We are in a very bad and sad situation in terms of democracy and human rights.”

Despite the threats, he said 350.org would continue its campaigning for a shift to clean energy and supporting indigenous forest defenders.

Bolsonaro’s victory is raising concerns abroad, including in Norway, a major funder of forest protection efforts in the Amazon. The Norwegian government rebuked the outgoing administration and slashed payments to the $1.1 billion Amazon Fund last year, over an uptick in deforestation rates.

Under Bolsonaro, the Brazilian government is expected to be less amenable to international influence. In his comments on the Paris Agreement, the president-elect has expressed that his main concern is preserving Brazilian sovereignty.

Norwegian environment minister Ola Elvestuen told Norway’s state broadcaster: “Brazil’s contribution to reducing deforestation in the Amazon has been one of the most important measures to curb climate change in the last decade… We want to continue the good cooperation with Brazil in the future too.”

Ines Luna, a campaigner with Rainforest Foundation Norway said: “Of course we are extremely worried that Brazil will change its climate policies.”

The international community still has “a very important role to play… in reminding Brazil about their commitments,” she added. And private sector initiatives to crack down on illegal deforestation in the supply chains of soy, beef and other commodities will be “fundamental” to limit the damage.

The election result throws into doubt Brazil’s plans to host the 2019 UN climate summit, which were approved by a regional group earlier this month.

Now he is having second thoughts, he told Climate Home News. “I would not expect Brazil to be the best host under a Bolsonaro government.”