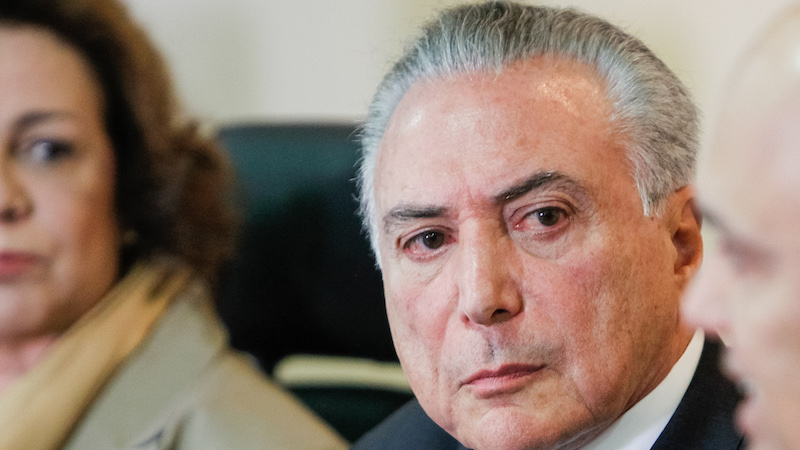 By Fabiano Maisonnave in Oslo

Michel Temer, the embattled president of Brazil, will find no respite from his problems on a visit to Norway on Wednesday.

As he toured the Scandinavian nation to drum up investment for his struggling economy, Temer was reminded that Norway’s major foreign aid support is conditional on protection of the Amazon rainforest.

“I believe that it is important to express concern when concern is due,” wrote Helgesen, addressing his Brazilian counterpart, José Sarney Filho.

“As you are aware, a set of policy measures that have caused strong public reactions in Brazil are making their way through Congress, including the revision of the environmental licensing criteria and the roll back of of protection of significant tracts of the Amazon. In parallel, budgets for key institutions that provide vital services for forest protection, are being cut, and their mandate to operate effectively is put under pressure.”

Norway is in a special position to deploy such strong diplomatic language. Brazil is the largest recipient of its foreign aid. Since 2009, Norway has pledged $1.1 billion to the Amazon Fund, which has financed anti-deforestation and sustainable development projects such as an agroforestry management and production project with the Ashaninka people and satellite monitoring.

“The big picture of the last decade is very positive. Brazil has set an example to the world in combating deforestation. Now, we are seeing a worrying development in the last couple of years. We’ve had a very good and frank dialogue with Brazilian authorities about what can be done to get back on track,” Helgesen told this reporter on Monday in Oslo.

While he said environmental policies “are entirely up to the Brazilian government,” the Norwegian minister added aid payments are based on results. “If deforestation is reduced, there is money coming from Norway. If deforestation increases, there will be much less money, because it’s about honoring results of nationally-based policies.”

Although data is not yet available for this year, Norway’s payments through the Amazon Fund are likely to be significantly cut, following a 29% deforestation increase in 2016.

On Tuesday, Temer vetoed a bill from Congress that would have reduced protections across 1.4 million acres of land, much of it in the Amazon. Observers suggested he was trying to improve his image for Norway, after the plans sparked an international outcry.

That reprieve for the forests may be temporary, with Sarney Filho announcing on Sunday he was developing another bill to deregulate a different area. Farming and mining interests continue to wield significant influence in Brazil’s politics, lobbying for the right to expand operations into forested areas.

During Temer’s state visit to Norway, the two environment ministers meet for the second time this year. There was a previous meeting in Brasília in March.