After a surge in illegal deforestation, Brazil’s carbon emissions have risen for the third year running, according to a new study 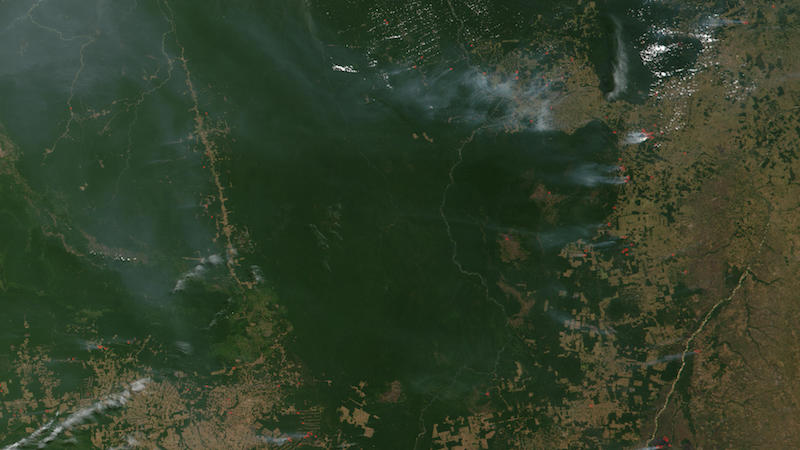 Satellite observation of fires from deforestation in the Brazilian state of Parana (Photo: Nasa)

Despite Brazil’s worst recession in history, national greenhouse gases emissions are estimated to have risen 8.9% in 2016 and reached the highest level since 2008, agriculture and illegal deforestation were the main culprits.

The figures comes from the new edition of Seeg (the Greenhouse Gas Emissions Forecasting System), launched on Thursday by the NGO Observatorio do Clima. Seeg uses data produced by government reports and research centres to predict emissions.

Emissions from land-use change grew 23% in 2016, accounting for roughly half of all greenhouse gases released into the atmosphere by Brazil. This was driven by a 29% increase in Amazon deforestation during the period between August 2015 and July 2016, according to calculations by the National Institute for Space Research (INPE), a federal government research centre.

The recession has led to a decrease in emissions from most other economic activities. The largest drop came from the energy sector, a 7.3% fall.

Last week, INPE released new data showing that deforestation reduced 16% in the following period, but analysts warned that the effect of president Michel Temer’s pro-agribusiness policies, including a pardon for land-grabbers, are still to be felt.

“The lack of deforestation control, especially in the Amazon, has led us to emit 218 million tons of CO2 more in 2016 than in 2015. It is more than twice what Belgium issues per year,” said researcher Ane Alencar of IPAM (Institute of Environmental Research of the Amazon), who was in charge of the calculations of emissions caused by change of land use. “This is dramatic, as deforestation is mostly illegal and not reflected in the country’s GDP.” 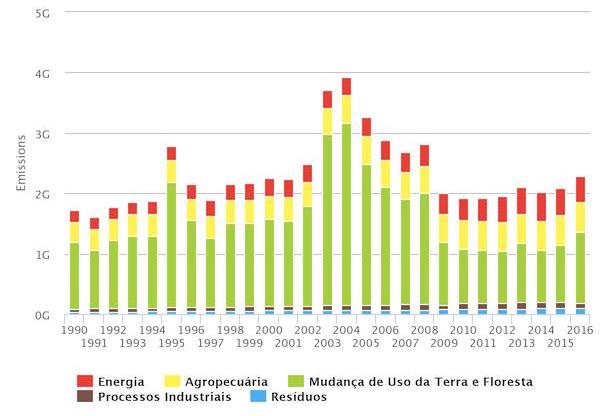 Last year, Seeg estimates Brazil released 2.278 billion gross tons of carbon dioxide equivalent (CO2e), compared to 2.091 billion in 2015. This is 3.4% of the global total, Brazil remains the seventh largest polluter on the planet.

After falling for almost a decade from their highest point of 3.9 billion tonnes in 2004, Brazilian emissions have risen again in the last few years. Under the Paris climate agreement, the country has pledged a 37% reduction in emissions below 2005 levels by 2025. Given the large reduction in deforestation achieved under previous governments, much of this work is already done. But the country still needs to cut back on carbon.

While the major source of extra emissions was from forest loss, emissions from agriculture also rose by 1.7%. Agribusiness is by far the main source of greenhouse gas emissions in the country: 74%. According to Seeg, if Brazilian agribusiness were a country, it would be the eighth largest polluter. Between 1990 and 2016, the land use sector in Brazil emitted more than 50 billion tons of CO2e, equivalent to one year of global emissions.

The government of Brazil has been contacted for comment.