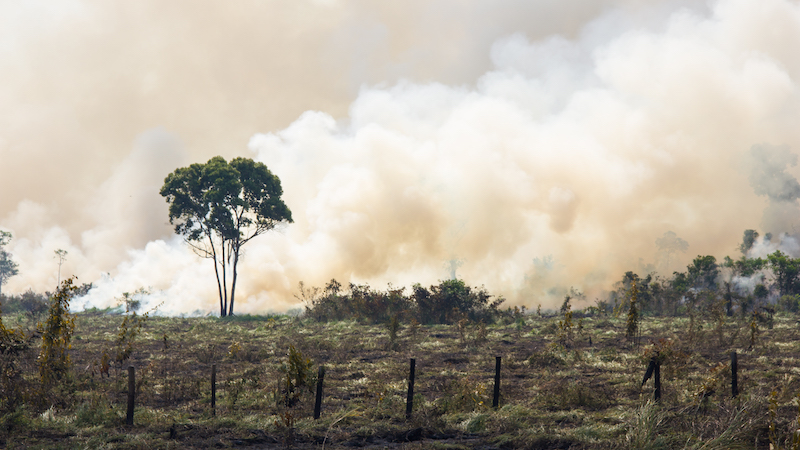 "These fires represent something that the forest simply can’t stand up to," says Philip Fearnside (Photo:Deposit Photos)

As in many parts of the world, the climate of the Amazon is undergoing dramatic changes. Droughts and floods happen more often, as well as forest fires.

But in recent years, Brazil’s government, which holds the largest swathe of the biggest tropical forest in the world, has privileged economic interests over preservation, according to one of the world’s leading experts on the region and its environment.

Philip Fearnside, a US-born professor at Brazil’s National Institute for Research in Amazonia (INPA), has researched the Amazon for three decades. In an interview with Climate Home in his office in Manaus, he explains how climate change is driving forest fires through the most important forest on earth, creating a cycle of carbon emissions that threatens to push beyond human’s capacity to control it. He also criticises Brazil’s government for their favouring of industry and explains the country’s peculiar relationship to its own laws.

CH: What do we know and what don’t we know about climate change in the Amazon? 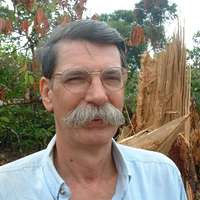 This Atlantic dipole has been increasing in frequency at a tremendous rate, much faster than El Niño, which is also increasing. We had a major drought in southern Amazonia in 2005 and another one in 2010, just five years later.

It’s linked to warming of water on the surface of the tropical part of the Atlantic, north of the Equator. And that is explained by a decrease in the amount of dust over the Atlantic ocean. There’s a lot of dust that comes from the deserts in Africa and there have been particles coming from pollution in Europe, too, which is also decreasing.

But the rainfall in the world is increasing. As you have the oceans warming up all over the world, so there’s more water evaporating. And water has to fall somewhere as rain. Rainfall has increased over the Atlantic Ocean. So that is washing out this dust that is in the atmosphere, removing what was a shield that was keeping some of the energy from the sun from reaching the water in the ocean.

Removing a lot of that shield allowed the water to warm up more, so more air is going to rise. Warm water also has consequences for hurricanes, but for Amazon droughts the problem is that more air is rising when the sun is right above that patch of water. The place on the Earth where the sun is beating down directly migrates north and south of the equator, and for part of the year this location is in the tropical north Atlantic.

This air cools as it goes up, and it will dump a lot of rainfall right there, and the rising air then divides, with part going north and part going south. The air travels for 30 degrees latitude and then falls back to the surface of the Earth, after which it makes a circle and goes back to where it was before.

If there’s more air going up, it means there also more coming down in the other side of cycle. The place where the air is coming down, is over the southern part of the Amazon, in places like Acre and Rondônia. The descending air is dry, creating a drought when it comes down.

Also, the warmer water in the tropical north Atlantic pushes the place where the air comes down even farther north. This means it’s even farther into the Amazon, where it’s drying things out. This is what gives you an Atlantic dipole drought.

What is the impact of El Niño?

In the fourth report of the IPCC there is a clear statement that, with more global warming, there will be more “El Niño-like conditions”. This is the key phrase. It’s not El Niño itself, but rather means a big patch of warm water in the Pacific Ocean, which is what causes El Niño.

The problem is to get climate models to agree on the next step, which is how the warm water affects currents of air in the atmosphere and, therefore, droughts and floods in different parts of the world. The climate models don’t agree enough to be able to say all these are linked to global warming.

But one of the impacts of a patch of warm water in the Pacific that you can see that very clearly  is big droughts in the northern part of the Amazon. For that, there is no doubt – it’s very obvious.

Every time there is a big patch of warm water in the Pacific Ocean, you have a big drought and forest fires in the Amazon. That happened in 1982, 1997, 2006, and 2015. El Niño produced huge forest fires in the Brazilian state of Roraima and in Venezuela.

These fires represent something that the forest simply can’t stand up to. The Amazon forest isn’t adapted to fire, it’s not like the savannahs in central Brazil, where the trees have thick bark and are adapted to fires. Amazon forest fires kill a lot of trees. The fire moves through the understory of the forest, burning leaves and twigs on the ground. It’s not what people imagine of a forest fire. People think of the Disney movie Bambi, with the whole forest burning up. That’s what you get in pine forest, not an Amazonian forest. But even that little line of fire will kill a lot of trees. It moves very slowly, so it takes times to pass each one of the trees.

Forest Diamonds: How the Catholic church helped open up a forest to miners

So, the next time you have an El Niño, there will be a lot of dead wood in the forest, and that’s firewood that’s going to burn. It’s a vicious cycle that gets started and after three or four fires, basically you don’t have a forest anymore, just a bare area with a few scattered trees here and there.

This is very dangerous for the climate because it’s something that doesn’t depend on people deciding what to do. You can decide not to burn fossil fuels and not to cut down trees with chainsaws. But if a forest is being killed because there are more forest fires, it’s something happening beyond human control. And there’s a limit to how much humans can do to control global warming.

What are the policy changes that are taking place in the Brazilian Amazon?

There are many problems with changes in public policies in the Amazon. There were also problems in the previous presidential administration, but they certainly became more grave in the year we have had this administration [under Michel Temer]. There is a series of bills and proposed constitutional amendments passing through the national Congress that would basically, eliminate environmental licensing, open indigenous lands to mining, and make it easier for land claims to be legalised.

These things lead to more construction projects for highways, dams, mines and so forth without the environmental and social restrictions that have helped slow down the most damaging kinds of development.

The economy as a whole is moving towards extraction of physical products and exporting minerals, timber and soybeans, things like that, as opposed to manufactured goods and other things that have less environmental impact.

How easy it is to change policies in Brazil?

The politics in Brazil are different to other countries in various ways. One important thing is that it is very easy to pass constitutional amendments. It’s very different from the US, for example, and other places. The constitution has been amended 95 times since it came into effect in 1988. This opens the way to have all sorts of fundamental things change.

There are other aspects of Brazil that are strange. There are many laws that are simply never enforced. Laws are tested to see whether they will actually be enforced or not. This happens over and over with regulations on deforestation, environmental licensing and whatever. People in other countries just assume that whatever is the law is what actually is going to happen. That isn’t the case here.

Brazil has decreed that it requires indigenous people be consulted over projects that would directly affect them. It is part of convention number 169 of the International Labour Organisation, which was converted into a Brazilian law in 2004. It’s simply not enforced. 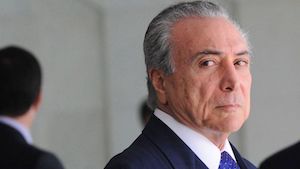 You’ve got a dam that just got its final approval a couple of weeks ago: the São Manuel Dam, which didn’t have any sort of consultation with the indigenous peoples. It’s only 700 metres from an indigenous area.

There are other things that are different. One is putting things in “contingency” status. This simply does not exist in North America or Europe. Here you have a budget for the environment ministry, for example, at the beginning of the year, but that doesn’t mean they’re actually going to get that money. Sometime in the middle of the year, the money runs out and so the government puts different areas in contingency status, which means they don’t get the money they were promised until the government collects more taxes and has money to give out.

In practice, there is much less money for enforcing environmental laws that you would imagine just looking at the federal budget. So, lots of things can happen between a public policy being set up and having the actions actually happen in practice. This is certainly evident in many different ways in the environment area.