Embattled president is regularising illegally occupied land at knock-down prices, in a move environmentalists fear will lead to more deforestation 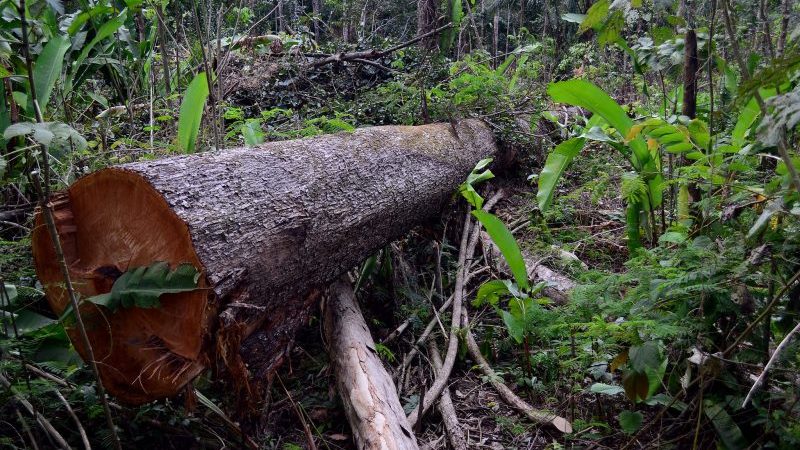 Land-grabbing follows a well-established pattern in the Brazilian Amazon. First, you invade a public vacant land, clear the forest as fast as you can, plant pasture, throw a few cattle on it and claim that you are a rural producer. Then you wait until the federal government grants a generous amnesty.

Under the new law, anyone who appropriated Amazon land before 2011 may be excused, an extension from the previous 2004 limit. The maximum area of claimable land has been increased from 1,500 hectares to 2,500 hectares per person. What is more, the cost of title deeds has been discounted by up to 90%, from a government index that already values the land at below market rates.

Temer rubber-stamped the act as he tries to gather support in Congress, which is deciding whether to authorize the Supreme Court to try him for corruption – a first for a sitting Brazilian president. It will help him keep the influential “beef caucus” onside, which has 207 out of 513 lawmakers in the lower chamber.

Justifying the changes, the federal government argued they would bring relief to thousands of low income families living in remote areas of the Amazon.

“This policy improves the fight against deforestation and land-grabbing, as the public lands will have a proper destination in the region. We understand that there is no such a notion that once you occupy a public land, you will be regularized”, said José Dumont, secretary of land regularization in the Amazon, during a press conference on Tuesday.

Two days later, in another measure heavily backed by the beef caucus, Temer sent to Congress a bill that could strip 349,000 hectares (862,000 acres) of Jamanxim National Forest, in the Amazon state of Pará. The goal is to regularize land-grabbers that invaded part of the conservation unit, which may lose 27% of its area.

The move came just weeks after Temer, under pressure from environmentalists, vetoed a bill approved by Congress that would reduce 37% of Jamanxim’s area.

“Temer governs for his own good and not for the country. Without any shame, he is selling out the Amazon in exchange for votes against his impeachment. This bill is absurd, it demoralizes the Brazilian State and shows that he is willing to do anything to continue in the presidency,” said Márcio Astrini, coordinator of public policies at Greenpeace Brazil.

In response to the news, land-grabbers in Jamanxim area lifted a two-week long protest that blocked BR-163 highway for most of the days. During the blockade, they burned eight new 4X4 pick-ups that were being delivered to Ibama, Brazil’s environment agency.

They might well be happy with the turn of events. NGO Imazon calculates the two bills combined will gift squatters a windfall of $160-190 million, instead of punishment for their environmental crimes.

This is based on comparing the market value of one hectare in that region ($566) with the regulated price for title deeds to be charged by the government. In Incra’s (National Institute of Colonization and Agrarian Reform) spreadsheet, the minimum price of unused land in the region is $211/hectare. The new law provides that, for titling, land-grabbers will be charged between 10% and 50% of that amount.

“There is no technical or legal explanation to change the base year from 2004 to 2011. It was basically a political decision,” adds Brenda Brito, a researcher from Imazon.

Imazon is still analysing the impact of the new legislation in the Amazon as a whole, but Brito fears it will encourage others to invade public vacant lands in the Amazon, which comprises 71.3 million hectares, an area twice the size of Germany.

Another environmental NGO, Ipam, predicted the deforestation if the reduction of Jamanxim forest takes effect. The method was to project the deforestation rate of the surrounding area in the 27% of the forest that will become a less strictly regulated APA (Environmental Protection Area, in the Portuguese acronym). It concluded that, by 2030, the deforested area will more than double: on top of 113,737 hectares already lost, a further 138,549 hectares of forest will disappear.