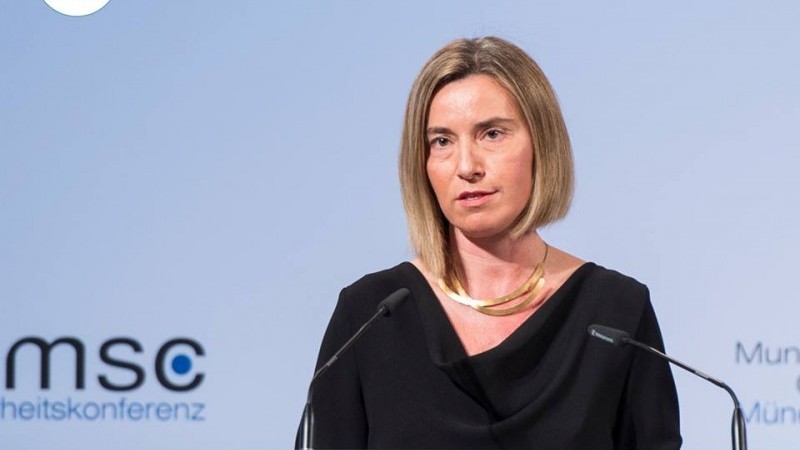 They sought to reassure unsettled NATO allies that the US was committed to the coalition – but in return they wanted European members to up their defence spending.

Federica Mogherini, EU foreign affairs chief, offered to help mobilise funds. But with a dig against “strong man” models of government, she argued the bloc’s investment in tackling climate change was making the world safer.

UN secretary-general Antonio Guterres called for “a surge in diplomacy for peace”, addressing the root causes of conflict.

Citing climate change and population growth as the two most important “megatrends” affecting security, he urged all countries to stick to the Paris climate deal.

“The commitment of the international community to stick to the Paris Agreement… is absolutely essential,” he said.

That was backed up by UN climate chief Patricia Espinosa: “Climate change is a threat multiplier that leads to social upheaval and possibly even armed conflict,” she said.

Global warming has been linked to violence in some of the world’s most troubled regions. Syria‘s ongoing civil war was preceded by years of drought, prompting mass migration from rural areas to the cities. The dwindling of Lake Chad to a tenth of its former area intensified competition for resources, creating the conditions for Boko Haram to emerge.

Many of Trump’s cabinet picks have poured scorn on the scientific consensus that climate change is a serious threat, mainly caused by human activity.

Mattis, on the other hand, does “get it”, his former colleague Stephen Cheney told Climate Home before the appointment was finalised.

The Pentagon has been incorporating climate change into its risk analyses for years. Its war games cover extreme weather scenarios and a recent report warned of military threats in a rapidly thawing Arctic.