Falling sea ice levels due to climate change and spike in Russian activity require strategic response in US, says department of defense 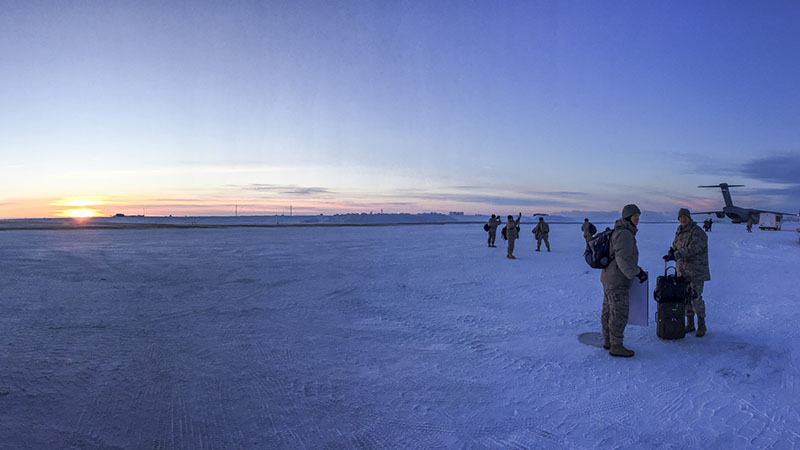 An updated US military strategy for the Arctic says “diminishing ice levels” due to warming temperatures pose a series of security risks to the country.

Released this week at the request of Alaska senator Dan Sullivan, a Republican, the 16-page document says the US must boost investment in its military assets around the North Pole.

“Diminishing sea ice will give rise to new economic opportunities in the region while simultaneously increasing concerns about human safety and protection of a unique ecosystem that many indigenous communities rely on for subsistence,” reads the Arctic Strategy.

“The breaking up of sea ice also threatens existing detection and warning infrastructure by increasing the rate of coastal erosion.”

In stark contrast to claims Trump’s administration may axe funding to climate science programmes, the Pentagon report says weather and climate science is a matter of national security.

“Robust observations, remote sensing capabilities, and modelling of the space, air, sea surface, ice, and ocean environments that affect operations in the Arctic are key aspects of domain awareness and safe operations, particularly in a remote and harsh region,” it says.

Citing NASA’s findings that the Arctic is “warming more rapidly than the rest of the planet”, the report says planners must consider the safety of their teams when evaluating environmental risk.

In a statement Sullivan – who sits on the influential Senate Armed Services Committee – said he hoped president Trump and Pentagon officials would “take a serious look at this document” and start work on a comprehensive Arctic strategy.

Trump’s new defence chief General James Mattis was confirmed in his post on 20 January, 12 days before this document was published.

“After nearly two years of advocacy and bipartisan efforts, I am pleased that we finally have a much more serious military strategy for the Arctic region,” said Sullivan.

“While this strategy is not perfect – including a failure to offer how best to counter the common threat it identifies – it is a dramatic improvement from the 2013 version which was more platitudes and pictures than actual substance.”

Report: Watch the Arctic melt away as the Earth warms

The Arctic is believed to hold over 20% of the world’s oil and gas reserves, and is also rich in minerals – all of which will be easier to access as sea ice levels recede.

In recent years Russia has invested heavily in the region. According to Reuters the scale of military build-up is the largest since 1991, seeking to impose control over half a million square miles of ocean.

Andy Holland, director of studies at the American Security Project, a bipartisan think tank based in Washington DC, said there was growing consensus among lawmakers of the need for a clearer Arctic plan.

“There is pressure to do this – and external pressure from the Russians. There have been a number of articles saying the Russians are militarising the Arctic,” he said.

Holland, who was recently in Norway speaking to NATO officials at the Bodo airbase, on the edge of the Arctic, said they reported an increase in Russian activity in the past year. “They are clearly pushing,” he added.

Read more on: Arctic | US Arctic