Some African governments are regretting the ambition of emissions targets submitted towards the Paris Agreement, say advisers 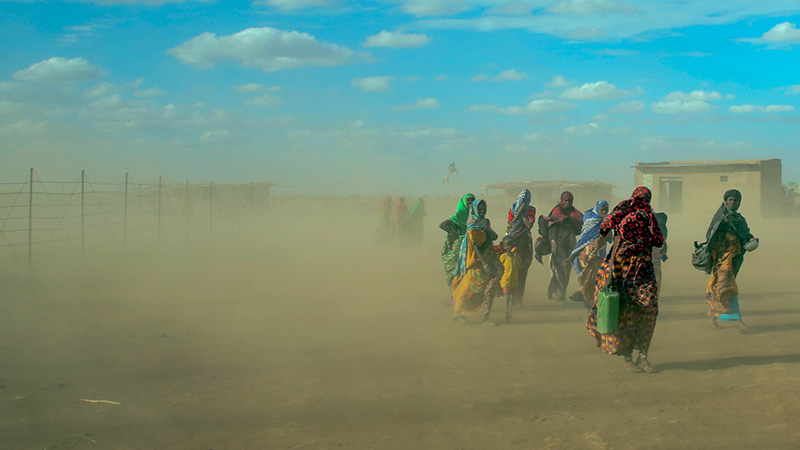 In Ethiopia, the government said 10.2 million people needed humanitarian assistance in 2016, at a cost of $1.4 billion, due to a drought that's been exacerbated by El Niño (Pic: Oxfam)

When Chad announced in September 2015 it aimed to slash its greenhouse gas emissions 71% by 2030, the country was hailed as a climate leader.

The government of the arid, oil producing state – long ravaged by warfare – even offered to slash carbon pollution 18% from business-as-usual in the event it received no external funding or support.

The generous gesture was seen by many observers as proof of a new age of African climate ambition, one of the 190 pledges that underpinned the historic Paris Agreement.

Ten months on, the country’s climate envoy tells Climate Home that Chad was pressured into this ambitious contribution and it will not be able to deliver.

“I personally think that the very ambitious INDC [climate plan] like ours is not achievable and it need to be reviewed,” says Hamid Abakar Souleymane, who also represents Chad at the UN’s climate science panel.

“We have been rushed by other countries, and we have elaborated a quick INDC, we did not gather all the data to reflect our national and achievable contribution, which normally [should] take into account sustainable development.”

Chad may join the nearly 100 countries to ratify the Paris Agreement, says Souleymane, on the condition it can change its contribution. “This could give us a chance to revise into an achievable goal,” he says.

Chad is not alone in its fears it may have committed to the impossible. The Africa Group – a UN negotiating alliance – has 54 members. Just 15 have ratified the Paris deal.

Some of those who have not formally joined the UN pact may seek permission to amend or revise their climate plans, says Seth Osafo, who advises the Africa Group on legal matters at the UN.

“I think that is likely to be the case for those who are not happy with the target,” he tells Climate Home.

In some cases, the support was gratefully received. In others, there was resentment at the way consultants from the developed world steered a supposedly nationally-owned process.

Nigeria, Tanzania and Ethiopia are among countries with ambitious carbon reduction goals that may have significant challenges meeting their pre-Paris pledges, says Chukwumerije Okereke.

A professor in environment and development at Reading University, Okereke has advised a number of African governments on climate and energy policy.

“I detect a sense of skepticism and buyer’s remorse from a number of African countries, who are asking: hang on, what have we committed to?” he tells Climate Home.

“The process through which many of these INDCs were written was seriously fraught with error, with minimal stakeholder consultation, data gathering and analysis…  It is understandable that France wanted to get an agreement, but I fear the success in Paris may have come at the expense of African countries.”

Okereke’s fear is similar to that of Souleymane’s: that the process leading to the development of the plans for African countries was not based on rigorous assessments, and was in some cases flawed.

He cites Nigeria’s target of 45% GHG cuts with external support and 25% without as one of the more unrealistic government aspirations ahead of Paris.

The country’s electricity grid has a capacity of less than 5,000 megawatts, but its 173 million citizens need generation sources ten times that.

“Where is that cut going to come from? This is a country that needs to grow and is fossil fuel based. Nobody has given me any analysis,” says Okereke.

Africa’s plight in the face of ever-increasing climate threats is one of the priorities highlighted by the Moroccan government ahead of the UN’s Marrakech climate summit, which starts on 7 November.

A supercharged El Nino wreaked havoc across the continent through 2016, leading to erratic rainfall in the South and East, weak harvests and increased migration.

Already some pundits talk of the Sahel region as home to the world’s first modern climate change conflict zone: as rivers dry up and food becomes scarce frustrations inevitably grow.

Yet funding to help the continent adapt to changing weather patterns and invest in cleaner energy sources is comparatively low compared to other regions, says the Climate Policy Initiative, which tracks funding flows on an annual basis.

The latest paper from the Venice-based NGO suggests $11 billion was spent in sub-Saharan Africa between 2013-2014, compared to $15bn in South Asia and $26bn in Latin America.

A new UN-backed Green Fund was supposed to drive more support to Africa, but despite receiving $10 billion of funds from rich nations has struggled to find enough suitable projects.

Climate wars: is the Sahel the first battle zone?

A major problem is the huge level of climate ambition that the Paris deal unleashed, argues Andrew Steer, a former World Bank official who heads up the World Resources Institute.

“This is difficult stuff. Most countries who committed to Paris and INDCs didn’t really have a plan – they had aspirations and targets. That’s different to a plan… as part of the pivot they will have serious discussions.

“Has sub-Saharan Africa received enough support? No. We need much more. It’s a tribute to those governments that they said: count us in.”

Next week, the WRI will launch a programme with France, Germany and Morocco to help developing countries craft suitable carbon cutting plans.

The hope is that if African governments can deliver clear energy investment strategies, it will then be easier to attract the billions required to build critical infrastructure.

“If you want to move from traditional ways of urban design or energy that requires a lot of money and that needs to start now,” says Steer.

Climate finance in 2016: 4 reports you need to read

Generally most African governments see the Paris Agreement as a “good deal” and recognise how it could protect their populations from future extreme weather, says Osafo.

But there is a widespread belief that support to help the continent prepare for erratic rains and the drought and famine that can result has not been forthcoming.

“I don’t think we have succeeded in how adaptation is going to be funded. It’s a priority and in areas like agriculture there is an urgent need for crop diversification, water irrigation,” he says.

“More resources have always been called for by developing countries to develop further and polish the NDCs in order to broaden their scope and plan on how to mainstream them in development processes,” says Washington Zhakata, head of Zimbabwe’s climate management department.

He sees COP22 in Marrakech as a chance to “debate issues of implementation”, envoy shorthand for securing more support.

Still, as it stands the status quo should not be accepted, says Okereke, who argues the Paris Agreement in its current form is an “equity and justice coup against developing countries”.