As Brussels prepares to carve up carbon commitments for 2030, countries from UK to Poland are playing hardball 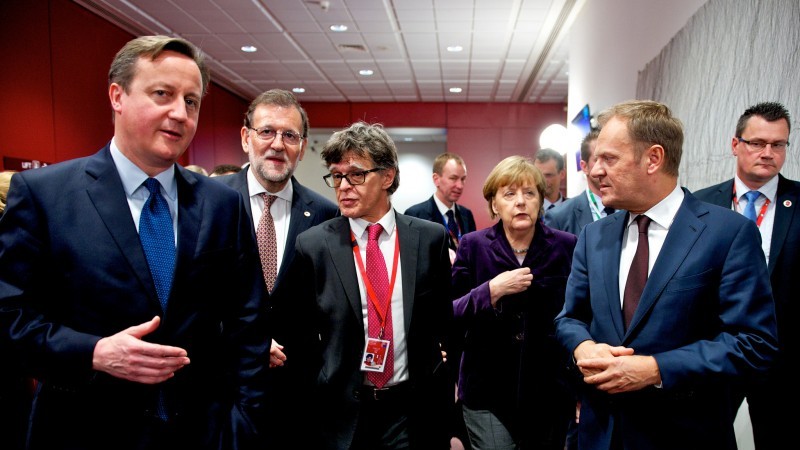 A united Europe pushed for an ambitious global climate pact in Paris last December – and got it.

Now it is time to deliver, that unity will be put to the test. Between a wayward Warsaw, refugee crisis and the Brexit threat, the European project is coming under strain.

“It is clear that Europe is having a couple of issues on its plate,” Dutch Green MEP Bas Eickhout tells Climate Home. “A lot of countries are really playing hardball.”

In this fraught context, Brussels must make policy decisions worth billions of tonnes of CO2 and divide its bloc-wide emissions target between 28 member states.

Piling on the pressure, France’s environment minister Segolene Royal is on a mission to ratify the Paris Agreement as soon as possible.

In theory, the EU can rubber-stamp the pact on the basis of the bloc-wide commitment already agreed: to cut emissions “at least” 40% from 1990 levels by 2030.

In practice, some member states are reluctant to formally join until that is broken down into national targets.

It all hinges on the “effort sharing decision”, in EU jargon. This applies to emissions from transport, farming, buildings and anything else – around 60% of the total – not covered by the bloc’s carbon market.

The European Commission is set to outline national targets on 20 July, ranging from 0% to 40% emissions cuts (confusingly, from a 2005 baseline).

“As soon as this proposal will be on the table, everybody in the whole world will be able to see how divisive climate policy in the EU really is,” he tells Climate Home.

This part used to be described as “burden sharing” and despite attempts to frame green growth as an opportunity, many still see it that way. 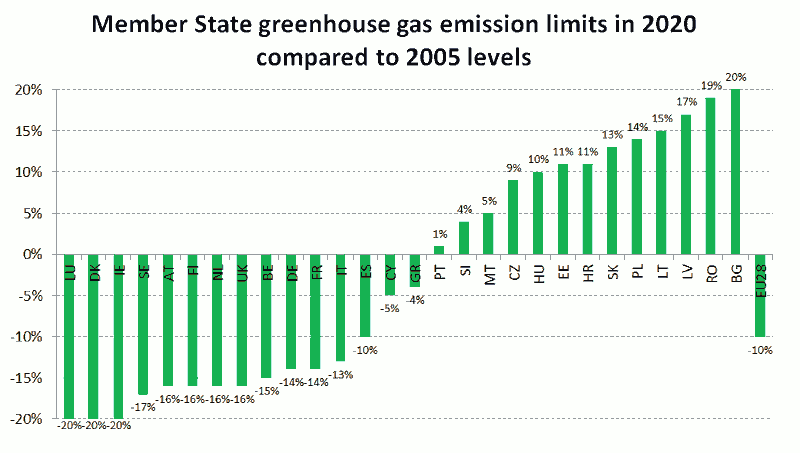 As with the 2020 targets, wealthy member states will be expected to find deeper cuts than their poorer neighbours.

Yet already, Brussels watchers report resistance from Poland, long a disruptive force in EU climate policy. Warsaw’s envoys threaten to reject the 8-9% target consistent with its GDP per capita, calling for 0%.

Under the 2020 climate framework, eastern European countries have barely needed to constrain emissions, as their targets allowed room to grow.

“This would be the first time Poland had to take action to implement any emission reduction mechanisms,” says Michalak.

If Poland insists on freeriding, it means asking other states to contribute more. That could be a tough sell.

“In the more ambitious member states, the question will be: do we buy them off again?” says Geden.

“Someday, we will have to close the gap between West and East. To give for the next decade all these exemptions is kind of problematic.”

Renewables pioneers Germany and Denmark are dialling back support for clean energy at home, in response to concerns about high prices. It is doubtful they will indulge special pleading.

Nor can Warsaw expect much sympathy from Brussels. Relations are more strained than ever, after Commission vice president Frans Timmermans accused the government of undermining democracy.

The UK is still less inclined to give freebies, two weeks ahead of a referendum on its continued membership of the EU.

While it has not been a major theme of the debate, several prominent Out campaigners are known for their climate sceptic views.

If they win, it will take around two years for Britain to disentangle itself. Meanwhile, the UK is lined up for the rotating presidency of the European Council in the second half of 2017 – when effort sharing decisions are due to be finalised.

Even if they lose, Conservative prime minister David Cameron – who is for staying with Brussels – could make concessions to soothe the disappointed Brexiters in his party.

“There is going to be a need to find those areas of EU climate policy that both sides can agree on as much as possible,” says Clutton-Brock.

Those could include the single energy market and rolling out electric vehicles, for example.

While politicians fight over how to carve the carbon budget, climate advocates are concerned the whole should not get too bloated.

Lawmaker Eickhout says: “What I fear is that [the Commission proposal] is going to be a bit of a present for all the countries making a fuss, at the cost of watering down Europe’s ambition level.”

Accounting rules set in the coming months will make a big difference to the level of greenhouse gases emitted next decade.

Loopholes – or “flexibilities”, to their fans – could lead to an extra 4.7 billion tonnes of CO2, according to a report by Carbon Market Watch, WWF and Transport & Environment. That is roughly equivalent to South Africa’s carbon footprint over 10 years. 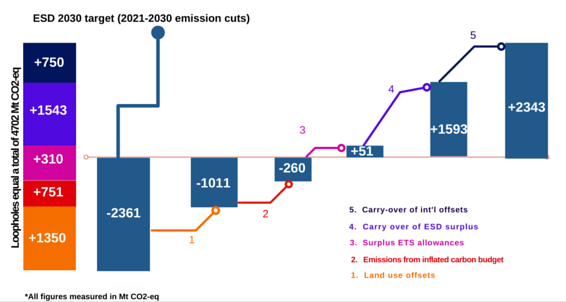 First, there is the battle for the baseline. Most EU states are expected to overachieve their 2020 goals. Hungary and Latvia want to carry over the credit towards the next decade’s target.

Another wheeze, backed by countries including the UK, France and Austria, is to transfer some excess pollution permits from the carbon market to the non-traded sector.

Then there are calls to count forest management towards emissions goals, claiming credit for trees planted up to 25 years ago.

“The EU’s climate action needs to be made more ambitious, not further weakened through the introduction of loopholes,” says Finnish MEP Sirpa Pietikäinen, endorsing the report.

“While ecosystem accounting is important, offsetting should not be used to reduce the climate efforts in other sectors.”

All these moves win countries headroom in the short term, but reduce the impetus for low carbon investment.

That only heightens the challenge of meeting the EU’s 2050 target of an 80-95% cut, warns Suzana Carp, analyst at think tank Sandbag.

“It is in everybody’s interests to keep the effort sharing decision as tight as possible over the next ten years,” she tells Climate Home.

“Otherwise we will need a very steep curve to 2050, perhaps without the technologies being developed.”

Not all flexibility is seen as undermining ambition. Sandbag supports allowing countries to take credit for funding carbon-cutting projects across borders.

There are some relatively cheap opportunities to reduce emissions in countries with weak targets of their own, says Carp. “It would be a win-win situation.”

For the EU’s credibility internationally, perhaps the most important signal will be provision to review ambition before 2030.

Global stocktakes are scheduled in 2018 and 2023, for all governments to update their contributions to the Paris Agreement.

Technically, they are entitled simply to resubmit existing policies. Yet the pact acknowledges these are collectively inadequate to hold temperature rise “well below” 2C or to 1.5C – the global goal.

Indeed, the EU was one of the most vocal proponents of a review mechanism. To lock in today’s effort levels would be against the spirit of its own negotiating position and alienate allies vulnerable to global warming impacts.

Politicians should not lose sight of this. While it may look like a zero sum game to their electorates, the effort sharing rules will be essential for Brussels’ standing on the world stage.