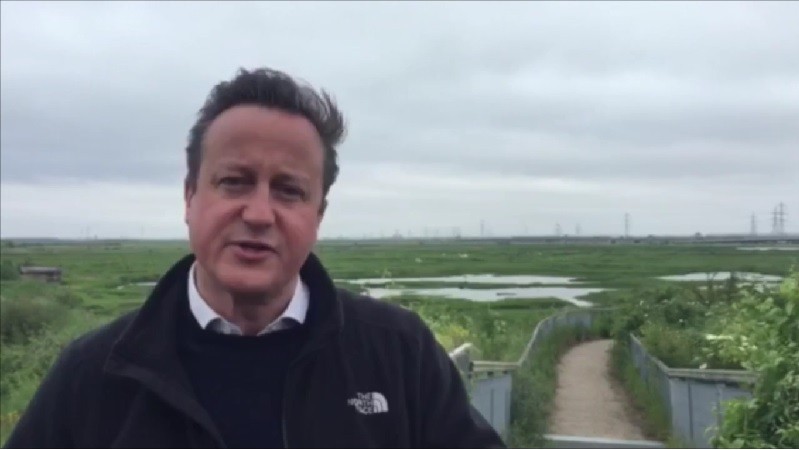 British prime minister David Cameron made the environmental case for staying in the European Union on Thursday.

Speaking from the windswept Rainham Marshes nature reserve, he told voters the UK was greener in Europe.

“The environment is a subject that has not really been discussed enough in this European referendum campaign, but actually, it really does matter,” said Cameron, during an increasingly rare foray into green issues.

“Climate change is something we cannot deal with on our own. The EU has played a key role in getting the Paris Agreement.”

Why a vote to remain on June 23rd is a vote to tackle pollution, climate change & protect our natural environment:https://t.co/RKMzJbTqXN

To coincide with the prime minister’s statement, wildlife charities RSPB and WWF also threw their support behind the “Stronger In” campaign.

They had invited lawmakers from both sides of the debate to argue their case before deciding how to advise their 1.7 million supporters.

And if this this rotten referendum has had any good then it's getting the Prime Minister to give his first green speech in, what, 8 years?

Green MP Caroline Lucas told the charities Britain was greener in the EU. On global warming, she said: “From Kyoto to Paris, being in Europe amplifies Britain’s voice in global climate talks and helps us to stand up against big polluting industries in the United States and China.”

Without specific reference to climate change, Conservative MP George Eustice countered that: “We could deliver far better outcomes for our environment outside the EU, where we would have the freedom to innovate.”

That was too uncertain for RSPB, chief executive Mike Clarke explained in a blog.

“No-one from the Leave campaign has yet been able to reassure us that we wouldn’t need to start again from scratch were we to leave the EU,” he wrote. “What will happen to nature in the meantime?”

With three weeks until the referendum, polls suggest a narrow lead for Brexit. ICM online and phone surveys on Sunday both put leave ahead by three percentage points.

Bookmakers are betting on sticking with Europe, on the other hand. Ladbrokes are offering odds of 3/10 for remain and 5/2 against leave.