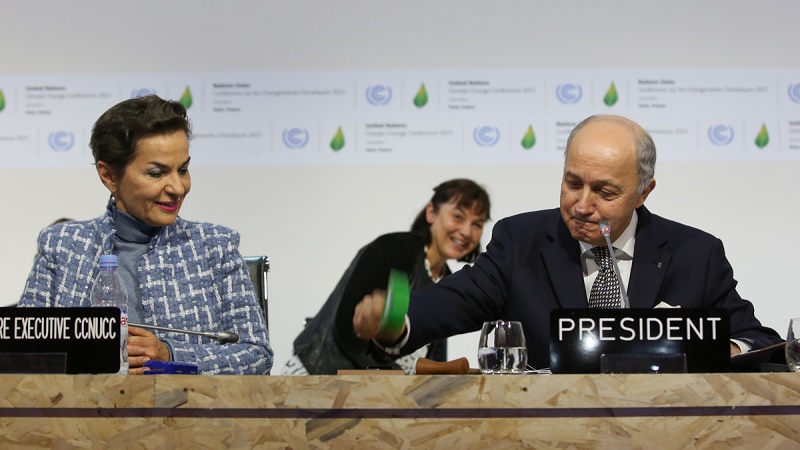 The French former minister who presided over a UN climate deal in Paris says it will be “damaging” if the EU is late to ratify it.

France is set to ratify the deal before summer, President Francois Hollande declared at a signing ceremony in New York last month.

Yet Laurent Fabius said that would not be official until the entire 28-state bloc had entered its documents, which is expected to take longer.

“For legal reasons, the ratification of the different countries of Europe will really be only counted when all the countries have ratified,” he said.

“We could be in a situation where we have the 55 members without Europe, which would be damaging.”

To swing into action, the Paris Agreement needs 55 countries responsible for 55% of global emissions to file their paperwork.

In a campaign to sustain momentum from the historic talks, many leaders have pledged to do so this year.

These promises come close to the double threshold, with Climate Analytics counting 38 states covering 52% of emissions.

China and the US are on the list, while the EU, India and Japan are notably absent.

Europe is in a “difficult position”, said Fabius. He declined to comment on the role of Poland, often seen as a blocker of climate ambition in Brussels.

On the morning Donald Trump became presumptive Republican nominee for the US presidential election, Fabius also expressed concerns about the outcome.

There is a “question mark” over the US role in climate action after November’s poll, he said. “If a climate denier was elected, you can imagine the impact, not only in the US but in other countries.”

Trump has described global warming as “bullshit” and the Paris Agreement as “one of the dumbest things I’ve ever heard in politics”.

While President Barack Obama is expected to ratify the UN pact before leaving office, extra domestic policies will be needed to meet US carbon-cutting commitments.

Now chairing France’s constitutional court, Fabius was in London to meet his British counterpart as well as ministers Amber Rudd and Philip Hammond.

On the terrace of the French ambassador’s residence, he reminisced about the final tense hours of talks in Paris.

As Climate Home reported, a last minute row over a “typo” threatened to derail the hard-won consensus. Where a previous draft said “should”, the final version contained a more legally binding “shall”, which the US could not accept.

Fabius recalled a critical conversation with the South African representatives of the G77 developing country negotiating bloc, who were sceptical.

Ambassador Joyce Mxakato-Diseko, head of their delegation, had been one of the toughest critics of rich nations in the talks.

“I went into a very very small room with our South African friends and said really, it is not intentional, it is a mistake,” Fabius said.

“There was a moment when things were between yes and no. If they said no, there was no agreement. We were able to say it was a mistake of typing.”